Alumna of the Month November 2009 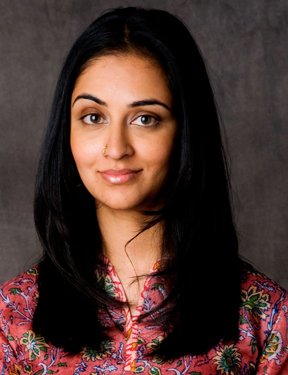 Challenging patents held by multinational pharmaceutical companies wasn’t exactly what Priti Radhakrishnan ’02 expected to be doing with her NYU Law degree. “I went to law school with the intent of going into the nonprofit world,” she says. “But I thought I was going to run a women’s shelter.”

While working at a women’s rights organization in India in 2003, Ms. Radhakrishnan discovered pharmaceutical patents that were filed on dubious legal grounds. Such unnecessary and frivolous patents mean that the poor in developing countries like India are priced out of medicines for diseases such as HIV, malaria, and tuberculosis. Along with her husband and fellow attorney, Tahir Amin, Ms. Radhakrishnan spent her spare time sifting through patent filings, looking for those that tried to game the system. “We started to intervene if we found a weak patent,” she says. “But soon we realized that we couldn’t just do this on an ad-hoc basis. We needed to do it systematically.”

That realization led Ms. Radhakrishnan and Mr. Amin to launch Initiatives for Medicines, Access & Knowledge, or I-MAK, in 2006. With a small team of attorneys and scientists, the New York-based nonprofit aims to improve access to affordable medicine around the world by identifying and challenging weak drug patents. Patent protection can be dramatic: In the 1990s, for example, HIV medicines under patent protection could cost a patient $15,000 per year. But when an Indian pharmaceutical company released a generic antiretroviral drug in 2000, the price had dropped to $150. “We’re not against patents,” says Ms. Radhakrishnan. “When a company invests in its R&D, it deserves its patent protection. What we target is when a company files more and more patents on the same drug to drag out how long they have ownership and to keep competition from bringing the price down.”

The I-MAK team, which includes attorneys and scientists who work side-by-side to evaluate patent filings, looks for patent gaming schemes such as cosmetic changes to formulas that result in a drug with all the essential ingredients but a new flavor, or simple obfuscation of the patent process with reams of new filings. “Some companies will file patents on the same drug over and over, hoping it will just slip through the cracks,” says Ms. Radhakrishnan. The next step: Filing a challenge. To date, I-MAK has filed more than a dozen, and recorded several positive outcomes. Still, Ms. Radhakrishnan says there’s plenty more work for I-MAK. “There are patients all over the world who aren’t getting access to the drugs they need,” she says. “It’s the difference between life and death.”

Ms. Radhakrishnan, who grew up near San Francisco and received an undergraduate degree from the University of California at Berkeley, sought more knowledge from law school than how to file briefs and argue cases. For example, she embraced a seminar in domestic violence law taught by Professor Holly Maguigan that surveyed domestic violence laws in New York and India and included field placement at an urban justice center in New York City. Law students worked with graduate students from NYU’s Silver School of Social Work—an experience Ms. Radhakrishnan found invaluable, particularly when the social work and law students switched sides during a role-playing exercise. “The lawyers were so stiff and distant and formal with the client, even when we were supposed to be social workers,” she says. “We learned that being professional doesn’t have to mean distancing yourself and not providing empathy and warmth to clients.”

Being empathetic is an important part of the job for Ms. Radhakrishnan, but at I-MAK, that empathy must work in concert with top-notch legal rigor. That’s because challenging Big Pharma patents means Ms. Radhakrishnan and Mr. Amin—a graduate of the University of Westminster School of Law—are typically pitted against armies of lawyers assembled by deep-pocketed drugmakers.

Ms. Radhakrishnan says that the first few years after launching I-MAK entailed continuous travel and plenty of time away from the couple’s Manhattan home. But in recent months, as I-MAK’s operations have become more solidified, Ms. Radhakrishnan says the pace has calmed somewhat. That’s afforded her more time to indulge in hobbies such as photography and yoga. “There were years when we didn’t get any downtime,” she says. “Now, we have a little more time to ourselves.”