Alumnus of the Month for July 2010 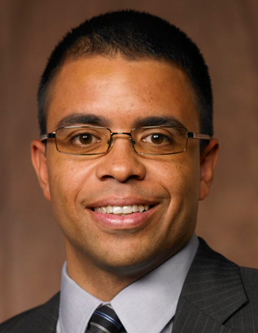 Debo Adegbile ’94 is in no danger of getting into a career rut. As litigation director at the NAACP Legal Defense and Educational Fund, Inc. (LDF), Mr. Adegbile is involved in just about everything that happens at the organization’s New York City headquarters: He might spend a morning pondering the legal issues in a weighty civil rights case, followed by an afternoon vetting résumés for fellowship candidates. The work provides a healthy balance of day-to-day and long-range work, he says. More important, it gives Mr. Adegbile a platform from which he can help shape his generation’s civil rights laws, just as his heroes—including LDF founder and former Supreme Court Justice Thurgood Marshall—did for their generations.

Mr. Adegbile lives in Chelsea with his wife, Susan Haskell, an assistant commissioner at the New York Department of Youth and Community Development, and their two daughters, Sela, age ten, and Devan, age seven. We spoke with Mr. Adegbile about his experience addressing the nine Supreme Court justices, the importance of equitable voting laws—and how his childhood work on Sesame Street helped him land a job as a new lawyer. The following is an edited transcript.

Q: Last year you argued your first case in front of the US Supreme Court. Tell me about that case.

A: It was the constitutional defense of Section 5 of the Voting Rights Act. The VRA has many provisions, but one of the central provisions is Section 5, which requires all or part of 16 states that have histories of serious voting discrimination to have proposed voting changes reviewed by either the US Department of Justice or a federal court in Washington before they can legally take effect. The goal is to ensure that the voting changes don’t worsen the position of minority voters, which has long been the pattern in many of these jurisdictions. So Section 5 is a prophylactic measure that stops discrimination before it takes root, and for that reason it is very effective.

Q: What was it like to argue—and ultimately win—a case in front of the Supreme Court?

A: The experience was terrifying, exhilarating, and humbling all at once. It was my first time in front of the Supreme Court, and the case was rather complex. And the outcome mattered a great deal: The Voting Rights Act isn’t just any law. The stakes were very high.

Q: You also were involved in voting rights cases with the LDF during the 2000 presidential election and in the aftermath of Hurricane Katrina in New Orleans. What draws you to these kinds of cases?

A. Voting rights fascinated me when I studied the topic in my constitutional law class with Professor Christopher L. Eisgruber. Leaders like Martin Luther King and Thurgood Marshall knew that individuals’ ability to express their political voices was essential to take down the racial caste system of Jim Crow. So many of the civil rights leaders understood that having a vote—having an ability to pick leaders and to have a full measure of citizenship—was essential to ensuring equality, not just in the moment but in the future. That lesson was not lost on me.

Q: How did you develop an interest and expertise in voting rights law?

When I studied at NYU, I had a chance to take a couple of wonderful classes on race and the law in the United States and South Africa with the late, great A. Leon Higginbotham, Jr., and later I practiced with him at the Paul, Weiss law firm. He was the former Chief Judge of the Third Circuit Court of Appeals. He spent his career working as a civil rights lawyer and a federal judge, and was a passionate and unyielding voice for equality in the United States. He was very involved in a number of voting cases and was very passionate in defending the voting rights of African Americans, especially in the twilight of his career. I got to work with him as a summer associate and then as an associate at Paul, Weiss, and through that experience I participated in my first case with the LDF. So that experience set me on a path of not only caring deeply about these issues, but having an opportunity to become involved in the continuing struggle for equality.

Q: How did your time at NYU Law shape your perspective on the law?

A: I’d say that NYU Law was critical in a number of ways. First, the student body was as important an aspect of my law school experience as the law faculty. The conversations we had after class and in social settings about the law and our varied experiences, and backgrounds really helped me test my ideas and open my mind to different perspectives. That experience dramatically enhanced my understanding of the law.

Additionally, I’ve always enjoyed thinking about doctrine and theory. But I can’t stay only in that space. I always have to think about the practical applications. I selected NYU Law in large part because of its clinical programs. I participated in a civil rights law clinic with Professors Claudia Angelos and Laura Sager, and we had the opportunity to begin thinking like civil rights lawyers.

A: There’s a lot of injustice in the world, but it’s a challenge to move from perceiving or hearing about an injustice to finding an articulable claim that can actually provide relief to a plaintiff. Not every wrong finds a remedy in the law, as it turns out. It takes a good bit of creative lawyering and tenacity on the part of litigators to formulate a winning theory, even where the claims merit it.

Q: Your career has an interesting side note—you spent some time on the cast of Sesame Street as a child, right?

A: I auditioned for Sesame Street during the first or second season the show was on the air. A big "cattle call" went out in New York City because they were looking for more kids. Off to the audition I went, and I guess I made it through without wrecking the set or acting too unruly. I filmed episodes for nine years.

At NYU, I distinctly remember taking a workshop from placement services early in my time at NYU. Their advice was to take anything you’ve done that’s interesting or different and put it on your résumé, because law firms get a lot of résumés and after a while they all start to look alike. On the strength of that advice, I put Sesame Street on my résumé. And true to form, in almost every interview, it was a substantial part of the focus. I guess that talking about the show was a lot more interesting than my views on the law or my command of legal topics—I suspect that is still the case. So in some way, I owe my career success to attending that workshop and heeding that advice.