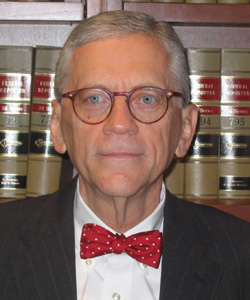 Blane Michael is a judge on the US Court of Appeals for the Fourth Circuit, where he has served since his 1993 appointment by President Clinton. During the thirteen years before he became a judge, Judge Michael worked as a litigator, doing trial and appellate work, at the firm of Jackson & Kelly in Charleston , West Virginia. Earlier, Judge Michael served as counsel to Governor John D. Rockefeller IV, practiced law by himself in a small West Virginia town, and worked as an assistant US attorney in Manhattan. Michael began his career at Sullivan & Cromwell. He received his JD degree from the NYU School of Law in 1968 and his BA in Political Science from West Virginia University in 1965.

What is your area of specialization and how did you come to practice in this area?
Except for a four-year stint as counsel to the governor of West Virginia, I worked mostly as a litigator before becoming a judge. No one in my family of farmers had ever been a lawyer, and as a young boy I thought that being a trial lawyer would be the most exciting job imaginable. It turned out to be very hard work, although I had many satisfying and rewarding moments.

You have spent time in both public and private practice. How would you characterize the difference between these two experiences?
Working in the public sector is more fun and less stressful; it also allows for the broader picture to be taken into account, which can be liberating. The work of a private lawyer, which is certainly vital in our system, is more confining because the interests of the individual client are paramount. I'm really saying that you should try the public sector for a while if you have the opportunity.

Were you ever involved in West Virginia politics?
Yes. I was Governor Rockefeller's campaign manager when he ran for re-election in 1980. Later, I managed two of his campaigns for the US Senate. I also served twice as the campaign manager for US Senator Robert C. Byrd. When I was involved in the four Senate campaigns, I continued to work full-time in my law practice. I did the campaign work at lunchtime, in the evenings and on weekends.

What led you to the NYU School of Law and how did the time you spent here inform your career?
When I was an undergraduate senior at West Virginia University, the chair of the Political Science Department suggested that I apply for a Root-Tilden (now Root-Tilden-Kern) scholarship. In those days Roots were selected by geography, two from the states in each federal judicial circuit. I received the scholarship, and it turned out to be one of the best things that ever happened to me. My pre-law school life was spent mostly within the borders of West Virginia, so the NYU School of Law opened up the world to me. I benefited greatly from the Law School's rich tradition of diversity—a diversity of students, professors and ideas. The sense of community that prevails at the Law School also helped me to understand that every lawyer should find some way to serve the broader human family.

Please describe a case or matter that has come before you that you found particularly interesting.
Mickens v. Taylor is one case in this category. Mickens was a federal habeas corpus petitioner who had been sentenced to death in state court. Mickens's federal habeas counsel uncovered something that Mickens had not known: Mickens's court-appointed counsel in his murder case was representing the murder victim on criminal charges at the time of the victim's death. I concluded that this circumstance had violated Mickens's Sixth Amendment right to conflict-free counsel, and I wrote an opinion (a 2-1 decision) granting Mickens a writ of habeas corpus that would have led to a new trial. My en banc court (the Fourth Circuit) disagreed and denied the writ in a 7-3 decision. The US Supreme Court took the case, and I thought my position might prevail. I was wrong. The Supreme Court, by a 5-4 vote, also denied Mickens the writ. See Mickens v. Taylor, 535 US 162 (2002).

Have you ever come across any law that you felt you were bound to enforce, but you also thought to be unjust?
I will duck this question because it is my duty to apply settled law, and it is usually best to do that without griping.

What has been the most rewarding aspect of your career thus far?
My current job as a US appeals court judge is, without a doubt, my most rewarding one. Hearing appeals and writing appellate opinions is fascinating work. I feel very lucky to have the one job I had wanted from the time I was a young assistant US attorney arguing appeals in the Second Circuit.

Who are your role models in the legal profession?
My role model in the practicing lawyer category is Whitney North Seymour Jr., who served as US attorney for the Southern District of New York in the early 1970s. I worked for Mr. Seymour as an assistant US attorney. Mr. Seymour constantly stressed to his young assistants that public service was a noble calling and that fair dealing was essential at all times. He practiced what he preached. After finally retiring from a Wall Street practice, Mr. Seymour opened his own small firm, doing pro bono public interest work. Mr. Seymour also believed that procrastination is a lawyer's biggest enemy. I can still hear him saying, "Do it now!"

My role model for a judge is Robert E. Maxwell, the US district judge for whom I clerked in West Virginia. Judge Maxwell has an especially keen understanding of both the privileges and limits of life tenure. He recognizes that the freedom to make independent decisions is diminished if the decisions are not respected. Part of that respect can be achieved, Judge Maxwell believes, if judges themselves are courteous and respectful to lawyers and litigants, including defendants in criminal cases.

What is your favorite thing to do when you are not working?
I like to read Charles Dickens. Recently, I read Bleak House for the third time. Dombey and Son is probably my favorite Dickens work. My wife and I also attend six or seven Class A baseball games each season in our hometown of Charleston, West Virginia.

How do you maintain a balance between your work and the rest of your life?
I probably have not maintained a good balance because I have spent too much time at work. I have been blessed, however, with an understanding wife and an engaging daughter who, by the way, recently received a PhD in art history from NYU's Institute of Fine Arts.

What advice would you give to current students?
No one starts at the top in the legal profession. Doing support work can be a bit dull or tedious at times. But do it thoroughly and carefully. If you do good work, it will be noticed, and before long you will be given cases or matters to handle on your own.