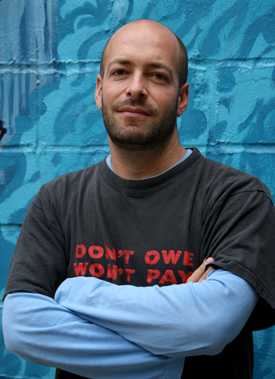 In late April 2008, Andrew Friedman ’98 filed a lawsuit in federal court on behalf of more than 2,000 dancers, waiters and bartenders who claim they are owed hundreds of thousands of dollars in back wages from the Flamingo Night Club in Jackson Heights, Queens. For years, the dancers—many of whom are Hispanic immigrants—paid the club $11 a day simply to be allowed to work. They were fined for missing work and were never paid a cent in wages, instead relying on the $2 they received per dance.

Advocating for workers who might otherwise go unnoticed is a matter of course for Mr. Friedman, who co-founded the nonprofit organization now known as Make the Road New York (MRNY) with Oona Chatterjee ’98 while both were still students at NYU School of Law. The organization helps members of the immigrant community in Brooklyn, Queens and Staten Island learn English, develop computer skills and navigate complex relationships with employers, landlords, healthcare providers and public benefits agencies. In addition, MRNY uses public policy making, legal advocacy and leadership development to address the larger issues affecting the community. In 2007, for example, MRNY’s combination of litigation, collective worker action, consumer boycotts and media outreach helped workers in a range of industries collect nearly $2 million in illegally withheld wages and government benefits, plus damages.

“Since I was very young, I’ve been focused on finding an effective way to combat inequality,” says Mr. Friedman, who worked at a shelter for mentally ill homeless women for a few years after earning his bachelor’s degree at Columbia University. “No matter how wonderfully we were doing with the 40 women who lived there, there was a perpetual line out the door for beds in the shelter. It felt like we were using a thimble to empty out the sea.”

Determined to engage in the larger public policy issues affecting these women and others like them, Mr. Friedman decided to pursue a degree from NYU School of Law. It proved to be an important decision—both for Mr. Friedman personally and for low-wage workers and immigrants in the city. “Having access to the professors at the Law School, as well as to the amazing people I met during my internships, really helped me solidify and shape my desire to engage in some sort of public policy work,” he says.

A 1996 internship at the Latino Workers Center, which combined community organizing with free legal services for recent immigrants whose workplace rights were violated, especially influenced Mr. Friedman. That same summer, Mr. Friedman and several fellow students set up an informal reading group with the goal of applying what they were learning in class to the streets of the city. “We thought we’d try to imagine in the abstract how to structure a nonprofit that could achieve what we wanted to do,” he says.

The abstract exercise became concrete after just a few months. Mr. Friedman and his fellow students began by working with a pastor in Bushwick to develop a class that would teach members of immigrant communities about the new welfare reform rules. “We prepared a workshop explaining the new rules in typical law-student detail,” Mr. Friedman says, laughing as he recalls his single-spaced 14-page outline. “And when we got there, we found about 70 Spanish speakers—almost all of whom had received a letter saying that their food stamps or disability would be cut off because of welfare reform. What folks needed was much more basic than we were prepared for.”

So Mr. Friedman and his fellow students dove in, spending 20 to 50 hours a week—on top of their law-school workload—helping people iron out their benefits. They continued their breakneck pace through graduation, eventually carving out time to work on public policy analysis and advocacy in addition to providing direct service. Today, MRNY focuses on five efforts: expanding civil rights, promoting health, improving housing, winning workplace justice and improving public education.

The organization continues to maintain a strong connection with the Law School. In 2007-08, for example, students in the Immigrant Rights Clinic worked with MRNY to develop practical strategies for immigrant New Yorkers who face improper police questioning.

While the need is great, Mr. Friedman has worked hard to balance his commitment to MRNY with his desire for a fulfilling personal life—including spending time with his wife and two-year-old son. Still, he reflects upon MRNY’s early, all-encompassing days with fondness and pride. “One of the advantages to starting when we were uncoached and young is that we had 80 hours a week to give for years,” says Mr.Friedman. “It’s a tremendous privilege to attend NYU School of Law. To the extent that students can use that privilege on behalf of others—particularly those who are underserved—they can make a really valuable contribution toward realizing our society’s best principles of justice.”