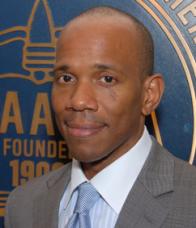 Amnesty International USA has announced that the next executive director of the organization will be Steven Hawkins ’88. Hawkins joins Amnesty international from the NAACP, where he served as executive vice president and chief program officer. Previously, Hawkins has also served as executive director of the National Coalition to Abolish the Death Penalty, as senior program manager at Justice, Equality, Human Dignity and Tolerance, and as program executive at Atlantic Philanthropies.
Hawkins was a Root Tilden scholar at NYU Law, and, after graduating in 1988, he clerked for Judge A. Leon Higginbotham of the United States Court of Appeals for the Third Circuit. In 2003, Hawkins was the recipient of the Law School's Public Interest Service Award.
"Steve Hawkins has an innate understanding of grassroots advocacy and the power of people to bring about social change. He will be a galvanizing force in inspiring and engaging our members, volunteers, supporters and staff," said Shahram Hashemi, chair of the board of Amnesty International USA, in a press release. "We are excited to have Steve at the helm. He is a leader with the heart, vision and drive to help us win the human rights battles ahead."
"The NAACP has been an integral and valued part of my life and career for many years and leaving is not an easy decision. However, the chance to join Amnesty's tireless activists and fight human rights injustice on a global scale is a battle I cannot refuse," said Hawkins in the press release. "I am honored to join Amnesty USA and continue to be part of a movement that will drive social change and protect the rights of all people.