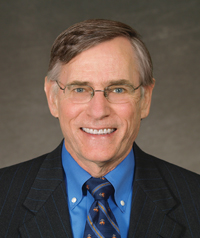 A pop quiz: Who oversees the vast network of personal financial advisers who handle the life savings of millions of Americans?
Answer: Officially, it is the Securities and Exchange Commission.

In reality, though, it’s nobody, says Richard Ketchum ’75. “You can start your investor adviser business, have your first child—have her reach her confirmation or bat mitzvah—and you still won’t have been examined by the SEC,” he says.

Ketchum, CEO of the Financial Industry Regulatory Authority (FINRA) and a self-described market geek, believes regulation of the advisory industry is one of the great missing pieces of the financial reform debate. For the past year, he has been making the case that his agency, which is the self-regulatory arm of the financial industry, has the resources, know-how, and motivation to monitor the advisory world.

His argument has stirred up controversy with consumer advocates who contend that advisers shouldn’t be regulated by the financial industry, as well as with advisers themselves who worry about the cost of compliance and naturally, says Ketchum, the added scrutiny.

But Ketchum has four rebuttals that he thinks will ultimately hold sway with Congress: Regulation is critical in an era when financial advisers are often the sole guardians of our retirement accounts; the SEC doesn’t have the people power to regulate the industry; FINRA has a governance system designed to protect against industry conflict; and, finally, it has the interests of the average investor at heart.

Ketchum is particularly passionate on this last point. He has scaled the pinnacles of the financial regulatory world at the SEC, NASDAQ, and the New York Stock Exchange during a period when markets have become infinitely more complex and stained by scandals that have defrauded investors. Yet from the beginning of his career he has seen himself first and foremost as a champion of fairer and more open markets that anybody can access.

The first seeds of that mission were planted in 1974 by NYU Law adjunct professor Martin Lipton ’55, who is now a trustee as well as chairman of the University board of trustees. At the time, Lipton taught a night course that was ostensibly a survey of the federal regulation of securities and corporations, but which was really about the contemporary questions of law and financial markets that captured Lipton’s kinetic mind.

Lipton argued that the big securities regulation issues facing Congress at that time were threefold, recalls Ketchum. First, the New York Stock Exchange held a virtual monopoly on securities trading, and the government needed to find a way to encourage competition to reduce costs. Second, regulators needed to use technology to build a national market system that would assure investors that they had access to the best prices no matter where their orders went. And third, regulators needed to ensure that the markets worked and were fair to both large institutional traders such as pensions and mutual funds, which were still relatively new to markets, and small individual investors.

Lipton’s course wasn’t precisely a light bulb moment for Ketchum, who took a job after graduation in 1975 at the global corporate firm of Milbank, Tweed, Hadley & McCloy. But Lipton’s formulation of regulation as a democratizing force on financial markets resonated deeply with him. “Marty is brilliant,” says Ketchum, “and every once in a while you sit there [with him], things fall together, and what has always seemed an arcane and uninteresting piece of the world looks a lot more fascinating.” Indeed, Ketchum applied to join the SEC as a regulator in 1977, and during the ensuing 35 years, the three issues that Lipton raised in that long-ago class have served as major themes in his career.

Early in Ketchum’s 14-year tenure at the SEC, where he eventually rose to become director of the division of market regulation, he worked on the agency’s nascent efforts to build a national market system. At the same time, he was one of the first SEC regulators asked to study the new derivatives and futures markets. “You were in a world, if you think back, in which investing was pretty simple,” says Ketchum. “There were stocks to buy and bonds to buy and not much else—none of the complex products that have blown up on us in the past 10 years.” That early expertise in derivatives earned Ketchum a seat at the table to advocate for stronger rules to protect investors after the derivatives markets imploded in 1977, then again during the crash of 1987 and, of course, most recently in 2008.

Ketchum continued to advocate for more democratic markets and investor protection when he moved into the private sector in 1991 to become chief legal officer at National Association of Securities Dealers, which oversees NASDAQ. He rose to president of NASDAQ, where he helped build the exchange into the competitor to the New York Stock Exchange that Lipton had once envisioned. Then in 2004, after a brief stint in banking, Ketchum moved to serve as the first chief regulatory officer of the New York Stock Exchange, where he worked in partnership with the SEC to police the exchange’s brokers.

But perhaps Ketchum’s most ambitious effort yet to build fairer and more open financial markets has been as architect and CEO of FINRA. Ketchum worked to create the agency in 2007 when he and Mary Schapiro, now chairman of the SEC, led an initiative to join the regulatory arms of the NYSE and NASDAQ to form a single institution with a mission to police 600,000 stockbrokers. FINRA touches virtually every aspect of the securities business—from registering and educating all industry participants, to examining all broker-dealers who work with public investors, writing rules, enforcing those rules and the federal securities laws, and administering the largest dispute resolution forum for investors and firms.

Ketchum was named CEO of FINRA in 2009, and under his leadership, FINRA’s first mandate has been to reinvent the way it examines the industry and dramatically improve its ability to detect fraud before investors are injured. “The whole goal has to be to get in there and stop fraudulent activity before you’re just cleaning up the bodies,” he says. To that end, they work in close concert with the SEC, the Justice Department, and even the FBI. But to truly protect investors, Ketchum is insistent that the agency must regulate financial advisers with the same rigor with which they regulate stockbrokers, who are subject to review at least every two years.

“You have an illogical regulatory system, with way different coverage and protections,” says Ketchum, “and yet the public has no idea of the differences.”

There is currently a bill pending before Congress that would grant FINRA powers to regulate the advisory industry. Ketchum is only modestly optimistic about the bill’s chances, especially in an election year. Yet he already has his eye on what may be an even more meaningful tool for investors: improving FINRA’s BrokerCheck system, which is an online clearing house where they can review their adviser’s profile, check for investor alerts on the latest scams, and ultimately seize greater ownership of their investing strategy.

Ketchum points out that you can consult Zagat or a half-dozen services that allow you to research your next meal, but far too few investors use BrokerCheck to choose an adviser. “While it is nice to get the inside scoop about your food,” he says, “it would be better still to have more knowledge about the people who are handling your assets.”