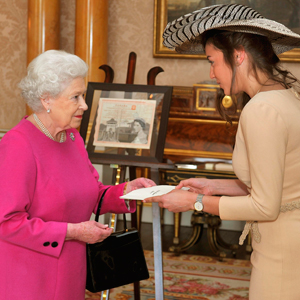 Panamanian Ambassador to the United Kingdom

Panamanian politics run in the veins of Ana Irene Delgado LLM ’06, her country’s youngest-ever ambassador to the United Kingdom. Her father and mentor, Hernan, is a Panamanian senator. She was seven when his law partner and family friend Guillermo Endara unseated General Manuel Noriega and spearheaded the country’s transformation from military dictatorship to democracy. And by 22 she had earned degrees in political science, law, and international relations. The only questions about her future in government were in what capacity she would serve her country and how long she should wait before entering the political sphere.

"I strongly believe that to be a good politician you have to first be a successful professional,” says Delgado, who had observed early in her life that Panama’s most important export was its strategic position as owner of the Panama Canal and its financial and business services. So in 2004 she applied to NYU's Advanced Professional Certificate in Law and Business Program. She was attracted to NYU because it was the only top-five American law school that would allow her to simultaneously study law and business.

At NYU, Nusbaum Professor of Law and Business William T. Allen took Delgado under his wing. Professor Allen, who founded the Pollack Center for Law and Business to serve as a bridge between the Law School and the Stern School of Business, personally advised Delgado on which classes to take to maximize her NYU experience. Even more critically, he facilitated weekly meetings for all the international students.

“NYU was very international,” says Delgado, noting that President Endara had earned his LLM from the Law School in 1963. “It helped me a lot with my career to have fellow students from Europe, Africa, and Australia.” Indeed, she says that many of her classmates at NYU have become members of her core international network. And she now meets every two months with a small cohort of NYU alumni who are stationed in Europe.

Delgado fell in love with New York City while at NYU. She was only 25 after completing the program in 2006, and felt tempted to linger in the city for one more year and perhaps take the American bar. But her father wouldn't have it. She had been offered a job as an associate at his firm, Solis, Endara, Delgado and Guevara, and he told her it was time to come home.

She, in turn, was determined to modernize the regal firm. Her first major proposal to the partners was to open offices in countries where they had large clients. They agreed on the condition that she lead the initiative.

Delgado assembled a small, multilingual team and targeted China. She traveled to Chinese cities including Beijing and Shanghai, trips that eventually yielded a partnership with a Chinese firm. Next she set her sights on Spain, where she intended to open a full-fledged satellite office. She moved to Spain and was six months into the project in August 2011 when she received a cryptic call from her father. Panama’s new president, Ricardo Martinelli, a family friend, wanted her to return home immediately. He had an important role for her that he would discuss only in person.

She and her father met the president in his office on August 30, when he offered her the ambassadorship to Britain. Martinelli acknowledged that, at 29, Delgado was historically young for the position. But Delgado recognized that her youth was part of the reason he had chosen her. Panama’s economy was growing at a 10 percent clip, and the government was completing a $6 billion expansion of the Panama Canal. His goal was to raise the country’s international profile. He needed an ambassador like Delgado who would be totally dedicated to the job: a trusted lieutenant he could call on at a moment’s notice, day or night.

Delgado asked for a day to discuss the decision with her family. She had planned to gain several more years of business seasoning. But she felt a keen sense of duty to respond to the call to serve, and her legal and business training gave her confidence that she could do the job.

Delgado arrived in London last fall amidst what she suspects was a swirl of gossip about her youth and inexperience. She chose to defeat those doubts by demonstrating her work ethic. During one typical week last summer she was preparing for Martinelli’s second state visit to the United Kingdom this year, a trip that would include a meeting with Prime Minister David Cameron. She was also negotiating with two British airlines to schedule a regular direct flight from Britain to Panama. And she was bracing for the 2012 Olympics.

Those tasks didn't even figure into two additional jobs that are part of her UK portfolio: diplomatic responsibilities for Ireland and Iceland, as well as a seat representing Panama at the International Monetary Fund. Then there are the more ceremonial—yet diplomatically critical—components of her job, including meetings with the queen, appearances at Wimbledon, and her efforts to introduce Panamanian culture and cuisine to the British.

“I’m always one who likes to demand more and more and more of myself,” says Delgado. But even she admits that the sheer volume of her responsibilities can border on overwhelming. Every evening after she returns home, she watches local Panamanian news until midnight. Then she picks up the phone to brief the president, administration officials, or her father until two or three in the morning. She guesses that she averages four hours of sleep a night.

“I don’t have to time think with everything happening so fast,” she says. Yet the adrenaline and sheer exhilaration of the work power her forward. “To be an ambassador is one of the most extraordinary events that any human being can experience.”