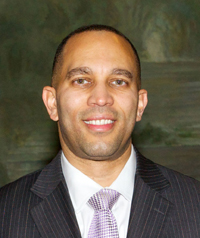 Newly sworn-in Congressman Hakeem Jeffries ’97 delivered the keynote speech to a crowd of more than 300 at NYU Law’s Annual Alumni Luncheon on January 25, just two days before he would hold a local swearing-in ceremony and celebration of his resounding win in the newly redrawn Eighth Congressional district that is anchored in Brooklyn and parts of Southwest Queens.

Following the completion of law school, Hakeem clerked for Judge Harold Baer Jr. of the US District Court for the Southern District of New York. Prior to his election to the Assembly, he practiced law for several years at Paul, Weiss, Rifkind, Wharton & Garrison, an internationally renowned law firm, and then served as counsel in the litigation department of two Fortune 100 companies, Viacom, and CBS.

Jeffries has been appointed to the Judiciary and Budget committees. During the 113th Congress, he has stated he will work on economic growth, reforming the criminal justice system, preventing gun violence and assisting neighborhoods in the district that were devastated by Superstorm Sandy. 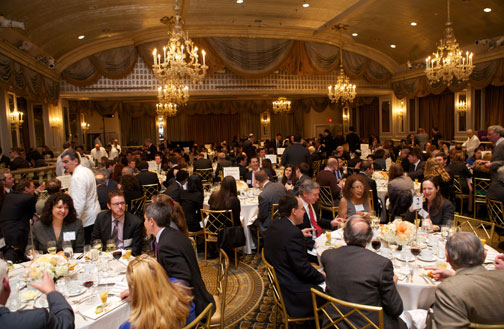 In both his LAA luncheon speech and his inaugural address, he addressed the challenges of finding common ground in a multicultural democracy. He observed at the luncheon that an increasingly stark left-right divide means that “‘compromise,’ among many, seems to be a dirty word.” But, he added, meeting in the middle on everything from the Constitution to the makeup of Congress to the troubled institution of slavery to the matter of selecting presidents had characterized the United States from its founding: “Compromise is uniquely American. Compromise gave birth to this great union.” While the issues have changed—Jeffries rattled off the current problems of the stagnating economy, problematic immigration policy, and gun violence—the need for compromise, he said, has not.

Jeffries reinforced this point by observing how the Republican-Democrat pendulum has swung back and forth every two years in recent elections; with no one party achieving consistent primacy, working across ideological divides was more important than ever. “In politics,” he said, “it’s often been said that there are no permanent friends, there are no permanent enemies. All there should be are permanent interests. I believe that we as members of Congress have a sacred charge to make sure we advance the permanent interests of the people of the United States of America.” 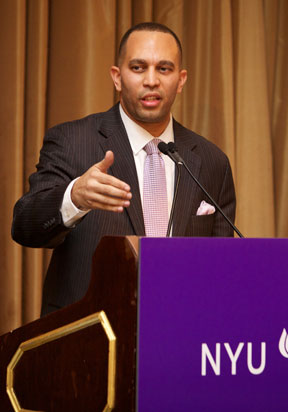 Jeffries's prepared remarks at the luncheon were polished but uncontroversial. However, a question from the alumni audience regarding his position on gun control showed glimmers of a passionate public servant and representative. Jeffries replied that he recently asked for a meeting with the director of the Bureau of Alcohol, Tobacco, Firearms and Explosives after a string of fatal shootings occurred in his district. “In New York City, in Brooklyn, in the district that I represent, I don’t see any gun manufacturers,” he said. “Every single gun that comes into the Eighth Congressional District, it seems to me, is a gun that’s flowing in from the Deep South, up the I-95 corridor, and is being illegally trafficked in. I thought it was relevant to figure out what the ATF is doing, because if the ATF is not in Bedford-Stuyvesant, East New York, the South Bronx, Harlem, I’m not sure where they are.”

This was the Jeffries present at his local swearing in, surrounded by family, friends, neighbors, volunteers and some of New York's political power players. He was more relaxed, casual, and dared to be funny. In a nod to his extraordinarily diverse constituency, he said he was grateful to receive Jewish, Muslim and Christian prayers—"I am exponentially blessed!" he quipped—adding, "I'm down there with John Boehner and Paul Ryan and I need all the blessings I can get." He also observed that he now represents many of the neighborhoods that were served by the legendary seven-term Congresswoman Shirley Chisholm, the first African American woman to win a Congressional seat. He imagines her voice in his head, he said, telling him, "We sent you down to Washington to stand up, so don't go down there and act up."