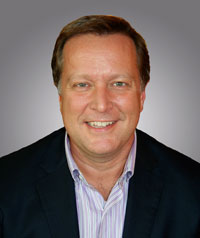 Blaine Templeman ’94, managing partner of Sheppard Mullin’s New York office and a partner in the firm’s Corporate and Intellectual Property Practice Groups (IP Transactions), was honored by NYU Law’s LGBT student organization, OUTLaw, as its inaugural Alumnus of the Year at the group’s annual alumni reception on January 31.

In a deeply personal speech, Templeman recalled a childhood of neglect and poverty in rural Illinois that led him to begin working at age nine and to seek refuge at a local church. But the church that had helped him also told him when he was 13 that his sexual orientation was a sin, and he was ultimately alienated from his church.

After graduating from a religious university in Tulsa that requires students to sign a pledge promising, among other things, that they will not engage in “homosexual activity,” and then attending Princeton Theological Seminary, Templeman decided to apply to NYU Law. At the time he was a legal assistant at a large firm. When he showed his supervisor his personal statement detailing his struggles growing up, the man told him he would be out of his mind to share the story.

Templeman ignored that advice. “What worried me most about my superior’s comment was that he was a person of color,” said Templeman, “and he should have recognized the power in being honest about who you are, and that struggles can give rise to great success.” He added, “I’ve always had this theory that I was invited to NYU solely because they did not yet have an openly gay Oral Roberts University graduate. That’s a tough box to tick.”

At the Law School, professors like Paulette Caldwell and David Richards opened Templeman’s eyes to different ways in which discrimination can be both codified and combatted. He befriended other LGBT students, and they compared notes about such phenomena as discrimination in the interviewing process. Through these experiences, Templeman found a clearer identity and voice.

After partnerships at Mintz Levin and Heller Ehrman, Templeman moved to Sheppard Mullin in 2008. There, he counsels domestic and international clients on protecting, developing, and commercializing their products and IP portfolios through transactions, precision and contract manufacturing, clinical trials, research, and outsourcing. During his interview, he expressed discomfort in working for a firm that wasn’t a national sponsor of Lambda Legal; in response, Sheppard Mullin became a sponsor and asked in return that Templeman start an LGBT affinity group at the firm.

Subsequently, with Templeman’s encouragement, Sheppard Mullin became the primary outside counsel of the Gay & Lesbian Alliance Against Defamation, reviewed its employee and benefits policies to make them more LGBT-friendly, altered its recruiting practices, and created a retreat for both LGBT employees and employees of color as well as representatives of the broader community. “The important thing was not necessarily to push ‘the agenda,’” he said, “but to push the civil rights agenda that applies to all of us, and we shouldn’t leave anyone behind when we’re doing that.”