Alumnus of the Month September 2011 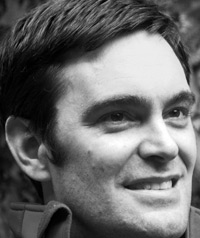 Matthew Gallaway ’95 emerged this winter from a decade-long journey through what many writers refer to as “The Tunnel” with the publication of his debut novel, The Metropolis Case. The tunnel describes the solitary years writers devote to crafting a manuscript based solely on the faith that it will see the light of publication. The stakes were particularly high for Gallaway, who had set an almost impossibly high goal for his book to open the postwar literary canon to a new generation of gay writers.

The first indication that Gallaway may have succeeded came from the New York Times, which heralded The Metropolis Case as both an artistic achievement and an engrossing entertainment. Perhaps most satisfying to Gallaway, whose literary hero is Proust, the review led by noting that his exquisitely constructed sentences succeeded in absorbing the reader into the world of the book.

“Publishing the novel was like realizing a gold-medal dream,” says Gallaway. “In some sense it has changed everything for me, and yet in another nothing has changed at all.”

That seemingly disjointed truth captures the ethos of a man who has worked–and at times struggled–in his life to keep his feet on two often divergent paths. The first has been the decidedly practical course of the high-powered professional: boarding school, followed by a degree in government from Cornell, then three post-college years in the nonprofit sector, law school, and, finally, a staid career in legal publishing. The second, more intuitive path compelled him to abandon his legal career to become a post-punk rock star, then to recast himself as the reactionary blogger the Gay Recluse, and, lastly, to pursue literary fiction.

Those paths arguably came the closest to meeting when Gallaway decided to go to law school in 1991. He was working for the environmental lobby in Washington, D.C., playing in rock bands, and suffering from a chronic case of what he describes as Generation X malaise. Law school at that juncture seemed to him as much an all-purpose master’s degree in liberal arts as a career choice. In keeping with that sensibility, he applied to just a handful of programs, based chiefly on their proximity to his favorite music scenes: the University of Minnesota for Husker Du and the Replacements; the University of Washington to get close to Seattle’s Grunge movement; and his first choice, NYU, which was next door to the East Village, an alternative rock hothouse that had birthed indie bands from the Velvet Underground to the Talking Heads.

Soon after Gallaway arrived at NYU, he and classmate Mike Donofrio ’95 put together a jangly, guitar-driven band called Saturnine. In short order, law school became his side project. “I was used to coasting through school, and all of a sudden I was in the most competitive academic atmosphere I had ever experienced,” says Gallaway. “I went through the motions, but music became my focus.” There was a music industry gold rush afoot to find the next Nirvana, and soon Saturnine was playing gigs in front of talent scouts at legendary clubs like the Mercury Lounge, Luna Lounge, and CBGB’s.

“I didn’t think I was going to make it as a rock star,” says Gallaway. “But I was in denial that I would ever have to make a real living.”

Indeed, he walked away from the law when he graduated in 1995 and supported himself between recording sessions by working in record stores, at an eyeglass cleaning company, and, occasionally, as a legal temp. “I’d tried to avoid firms where I’d run across my NYU classmates,” says Gallaway. “That was the absolute worst.”

At the same time, Gallaway was wrestling with his sexuality. “The most obvious analysis of that time,” says Gallaway, “is that I couldn’t commit to a direction in my life until I dealt with being gay.” It soon became impossible for him to continue to defer that question when, during a month-long stint portraying, fittingly, a guitarist in a play at Edinburgh’s Fringe Festival in 1998, he fell in love with opera director Stephen Pickover. “He was very out and not the kind of man willing to commit to a relationship with a partner who was in the closet,” says Gallaway. They returned to New York as a couple, and Gallaway came out to his friends, bandmates, and family. Not coincidentally, says Gallaway, his practical instincts took over, and he accepted a fulltime job as a legal editor at Aspen Publishers.

The publishing job, though, quickly became a means for Gallaway’s next incarnation. Over the next few years he immersed himself in the late 19th-century literature of Henry James, Virginia Woolf, and Oscar Wilde, as well as philosophers from Arthur Schopenhauer to Richard Rorty. Then, in 2001, he began work on The Metropolis Case, an interlocking narrative of two women and two men who are connected across geography and time by Wagner’s Tristan and Isolde.

“I only really started to understand why I wrote the novel after I finished it in 2007,” says Gallaway. “I felt that the gay voice was missing from the modern American literary canon and, rather than complain about that vacuum, I decided I should try to fill it myself.”

Gallaway’s ambition was tempered by the fact that he was neither published nor connected to the literary world. So, with the first draft of the manuscript complete, he began to build his own literary platform through his blog, The Gay Recluse. “I felt immediately at home in the blogosphere in ways that I didn’t in the literary landscape,” says Gallaway. So much so that he frequently satirized mainstream publishing, once entirely recasting a New York Times “Modern Love” column about a straight couple with gay characters. Meanwhile, he sold his manuscript to Random House and took a new position at Oxford University Press, where he is now a senior acquisitions editor in their legal department.

The Metropolis Case was scheduled to be published in January of this year. Gallaway was keenly aware that the market for literary fiction was vanishing and that the book would likely receive little notice. Then, on the eve of publication, the Times weighed in with its almost Proustian praise of Gallaway’s prose. The Washington Post and the Los Angeles Times followed up with equally strong reviews.

Gallaway knows their praise has given him the imprimatur of national literary legitimacy. But, true to form, he remains very much rooted in the practical professional life he has fashioned for himself. He shares an apartment in Washington Heights with Pickover, continues to work days at his corporate job, blogs in his free time, and has dug into a new--and still unsold–satirical novel that, perhaps tellingly, meditates on the absurdities of office life and the people who try to escape it.

In some ways, he says, he can now see a connection between his legal training and his literary style, which has been recognized for his precise use of language. “Dean John Sexton told us on the first day of our civil procedure course that all law comes down to definition,” says Gallaway. “It’s an idealistic description of the law, which I’ve found very much holds true for my version of literary fiction.”