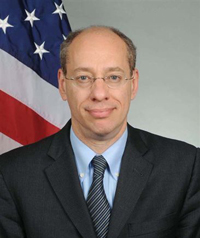 As chairman of the Federal Trade Commission, Jon Leibowitz ’84 sets the agenda for an agency with two areas of authority critical to the lives of almost all Americans: consumer protection and the enforcement of antitrust laws. President Barack Obama named Leibowitz chairman of the 1,100-person bipartisan agency after a 25-year career in Washington that saw him break into Democratic politics as an intern for Senator Paul Simon from Illinois, rise to chief counsel to Senator Herbert Kohl from Wisconsin, and even serve a stint under Jack Valenti as vice president for congressional affairs for the Motion Picture Association of America.

During his tenure as chairman of the FTC, Leibowitz has focused on issues ranging from stopping scams that prey upon financially distressed consumers to preserving competition in healthcare markets to safeguarding children. Most recently he’s been pushing hard for greater competition and innovation in the technology sector, including an ongoing antitrust investigation into Google. Even more relevant to the lives of most consumers, he’s using his bully pulpit to force technology companies to better protect our privacy online.

You’ve made Internet privacy a flagship issue of your term as chairman. Why should consumers be concerned that their information isn’t safe?
We’re all familiar with how online commerce has opened up the riches of the Internet, but it has also created an incredibly dynamic marketplace with evolving technologies that pose new threats to consumers. Companies are gathering unprecedented amounts of information about us. Much of it is anonymous or aggregated. But some information can be used to identify you. For instance, companies can track what products you’ve bought and the sites you’ve visited, and then sell that information to third-party brokers who could develop profiles of you—profiles that could be harmful if they became public or could be used to make important decisions, like whether you should be hired for a job. Meanwhile, if a company collects credit card information but has inadequate security, somebody can hack that information, and then you have an identity theft problem.

You’ve brought dozens of cases against companies with inadequate data security systems. But how do you protect privacy in a world in which we routinely expose information about our lives every time we conduct a Google search?
We subscribe to the rather conservative notion that your computer is your property, and people should not be putting things into it without your consent. That means companies ought to give consumers notice about what information they’re gathering. We’re working with Congress on legislation that will strike the right balance between letting the marketplace work and ensuring consumer privacy. Ultimately, though, the strongest solutions are going to come from industry itself, which is capable of creating do-not-track options much more nimbly than Congress.

So the idea is to work with the Apples, Googles, and Facebooks of the world to develop a set of best practices?
I’ve been in Washington since I graduated from NYU in 1984, and this is probably the most dysfunctional Congress I’ve seen. So we don’t expect any privacy legislation soon. But I’ve got a Facebook order on my desk that will protect over 900 million consumers around the world, which is pretty cool. For example, one of the questions people have been asking for a while now is whether you have the right to be forgotten. This new order, which we negotiated with Facebook, gives consumers the option of effectively hitting an eraser button when they leave the company’s service. It also says that Facebook can’t change your privacy settings without giving you an opt-in.

How far off are we from being able to punch a do-not-track option in the corner of our Google search box?
I think we’ll have a do-not-track option for third-party tracking by the end of the year or early next year. Industry is clearly moving in the right direction. We’re no longer arguing about whether we will have one, but when it will be effectuated and what precisely it will do. We believe it needs to amount to a “Do Not Collect Information” option, with a few exceptions—like anti-fraud efforts. It will probably be self-regulated, with major advertisers agreeing not to collect certain types of information from consumers who opt out. That said, if they violate that commitment, then they’d be subject to the FTC Act. So it’s self-regulation with an enforceable backstop.

You’ve become a powerful consumer advocate at a highly contentious moment in American politics. Who taught you how to get things done in Washington?
Legislation in Congress—when it happens—almost always comes from the center out. Rarely does one party enact legislation over another party’s objections. I’ve been fortunate to work for several people who knew how to take meaningful steps, even if they didn’t represent the entirety of what they hoped to accomplish. The late Senator Simon, a real old-school liberal, recognized that he didn’t always have the right answers. Senator Kohl believes you can almost always learn something from hearing the other side of an argument. And from the late Jack Valenti, I learned to never take criticism personally and always return phone calls within a day.

So how did you cross the bridge from law to national politics?
I believe graduating from NYU Law earns you the opportunity to take a quirky detour from the traditional path, while still always being able to go back and find a job. I was one of those people who drifted into law school without a clear idea of what I wanted to do. I actually got into NYU in 1980, but deferred for a year to tend bar in the Caribbean. I was having such a good time that I called up and asked if I could defer for another year. They said absolutely not. Once I was there I had one foot on the corporate track and another on the public service track. Then when I graduated I did something that, at the time, seemed very brave, but soon afterward I recognized was incredibly stupid: I turned down all my law firm offers and moved to Washington to look for a job in what I hoped would be the Mondale administration. So I had a few anxious months when I wasn’t quite sure how I would pay my rent. I eventually found a job at a law firm. But in pretty short order a former NYU classmate helped me land an internship with Paul Simon, who put me on his staff as a junior lawyer on the Senate Judiciary Committee.

We understand that you can’t talk about the ongoing Google antitrust investigation or the fine reportedly levied against the company for circumventing Safari’s privacy settings. But what other major goals are on the horizon for the upcoming year?
We want to infuse competition into healthcare. One of the most egregious violations of the antitrust laws in the pharmaceutical industry is what we call “pay for delay,” where brand name pharmaceutical companies metaphorically offer generic companies a big bag of cash in exchange for delaying the release of generic drugs. This is a lose-lose game for consumers, who either pay more at the counter for their medicines or pay more for their health insurance. We came ever so close to restricting pay-for-delay policies in the healthcare bill. Now we have a good chance of getting it done with two cases: one involving a drug called Androgel made by Solvay Pharmaceuticals, and a second involving a Schering-Plough drug called K-Dur. The Eleventh and Third Circuits, respectively, decided these recently, and we think they are candidates to get to the Supreme Court as early as next term. At the same time, Congress is looking for ways to reduce the federal deficit. Stopping these deals will save consumers about three and a half billion dollars every year. And the Congressional Budget Office has said that it will save the government about five billion dollars over 10 years. Even in this day and age, that’s not chump change.