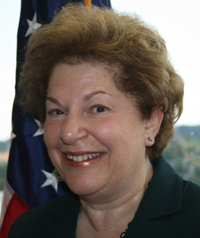 As she had for nine years, Francine Kerner ’74 walked into the Treasury Department on September 11, 2001, where she helped to oversee its law enforcement arm. She was 51 years old, had devoted 27 years to integrity in public service, and was certain that she had found her final and most fulfilling home in government. Then she saw the report of the first plane hitting the North Tower of the World Trade Center. In an instant, the trajectory of her career as a government attorney was permanently altered.

Kerner watched in horror as the second plane struck the South Tower. She and her husband, Michael Klein, had dined in Windows on the World the night before they were married. They knew that building. In that moment the brute force of the attack--for all its obvious and devastating scope--felt personal, like a street mugging she might have prosecuted in Brooklyn in the 1970s.

She ran up to the third floor of Treasury, looked out the window, and saw smoke billowing from the Pentagon. Then her cell phone rang. It was Michael. “Get the hell out of your building,” he warned. Just then the evacuation alarm sounded, and Kerner joined thousands of others fleeing downtown DC.

“As widely acknowledged," says Kerner, "across the government, we were asleep at the switch."

In the 10 years that have followed, Kerner has made it her mission, as the founding chief counsel of the Transportation Security Administration (TSA), to help ensure that terrorists will never again catch the American government unprepared. That task began when Kerner and a small, select legal team worked with senior policy-makers to create a 65,000-person agency imbued with broad authority to vet and search 1.7 million aviation passengers a day.

Kerner says that--just as most Americans could never have imagined the attacks--she could never have anticipated that she would be helping to head up such a critical national security initiative. But looking back on her career, this post actually seems like a logical expression of her motivation to become a lawyer in the early 1970s.

Kerner, who grew up in Queens, enrolled at NYU in 1970 with the intention of becoming a criminal prosecutor. The need to consider the moral implications of public policy decisions was given shape for Kerner during a second-year internship with the New York City Law Department, which is responsible for the city's legal affairs. In the summer of 1973, Marcia Lowry ’69 of the New York Civil Liberties Union filed the Wilder case, its landmark lawsuit against New York City to prohibit government agencies from referring children to foster care on the basis of religion. In carrying out the city’s policy to match children with foster parents of their own faith, New York had limited the number of beds available to needy African American children.

Mary Bass, the head of the Family Court Division, asked Kerner to help draft the city’s first response to the suit. The case, which ultimately took 27 years to resolve in favor of the NYCLU, gave Kerner early insight into the complexities of representing a government agency faced with a serious legal challenge to its programs. “Part of my education,” she says, recalling the early days of the suit, “was that you could have people of good will on both sides without the possibility of consensus.”

The power of that dilemma deepened her commitment to pursuing a career in public service. That ambition found its first expression after graduation in 1974, when she joined the Brooklyn District Attorney’s Office as one of a handful of women prosecutors during the 1970s crime wave. The stakes of the work were made visceral for Kerner when she herself was mugged on the street.

"When a stranger rushed me, ripped my purse from my arms, and threw me to the ground hard, I lost my freedom to walk home from the subway without fear,” recalls Kerner. “Dealing with the pain, anger, and loss, as well as the legal system, made me a more empathetic prosecutor."

While Kerner embraced her responsibilities for prosecuting city crime, she also hungered to pursue justice issues on a national level. Then in 1979 Mary Bass, who had been appointed the first statutory inspector general of the Commerce Department, asked Kerner to come to Washington, DC, to serve as counsel to the IG. In that position, Kerner helped oversee investigations and audits involving major components of Commerce, including the Economic Development Administration, the International Trade Administration, the National Oceanic and Atmospheric Administration, and the National Institute of Standards and Technology.

Yet seven years later, in 1986, she voluntary stepped off this accelerated career path. She had recently married Michael, a medicinal chemist, and in 1985 their first child, Elizabeth, who now studies drama at the New School, arrived. Then they had a son, Adam, who now works for Commerce in international trade. Kerner knew she wanted to spend more time parenting than her job allowed. So she made what was at the time a highly unusual request to give up her title and scale back to part-time, knowing that if her bosses refused she was prepared to walk away from the law.

To her surprise, her superiors agreed in an example of the federal government extending family-friendly workplace policies. "For me, scaling back to a part-time schedule was essential," says Kerner. “I continued to develop as an attorney, but I also had the extra time I needed at home.” Moreover, as her children grew, her bosses let her gradually increase her hours.

In 1992, Kerner was well positioned to move to Treasury. There she held senior legal positions at the Financial Crimes Enforcement Network; the Bureau of Alcohol, Tobacco and Firearms (ATF); and Main Treasury.

John Magaw, the former director of ATF and the US Secret Service, was appointed TSA’s first administrator. He quickly called upon a handful of federal career civil servants, including Kerner, to help him start the new agency.

Kerner arrived at TSA’s makeshift offices on January 14, 2002. Their mandate was clear: Never let another terrorist on board an American air carrier, but still ensure freedom of movement for people and commerce.

The enormity of the task was daunting. Starting with only a handful of cubicles, borrowed chairs, and reference books, TSA leadership had less than a year to hire 65,000 screeners and federal air marshals to safeguard the air space. They also needed to equip the nation’s airports with new technologies to search passengers for weapons and to scan checked baggage for explosives.

The constitutionality of these more intrusive airport searches had to be assessed. Once again, Kerner found herself evaluating ostensibly competing policy interests, balancing the need for aviation security against passenger privacy. Here, too, reaching a consensus has proved to be difficult. But under Administrator John Pistole, TSA's recent movement away from one-size-fits-all screening to a more risk-based approach has garnered greater public support.

The ultimate measure of TSA’s success has been the failure of any terrorist to turn another plane into a weapon of mass destruction. But even as the immediacy of September 11 has receded, Kerner remains concerned that terrorists will target American planes again. Indeed, with TSA's senior leadership, she begins most days at square one with an intelligence briefing on the latest terrorist threats. “Aviation remains a significant target of terrorists,” she says. Then she pauses for a fraction of a second and adds, “They only have to get it right once, and we have to get it right 100 percent of the time.”