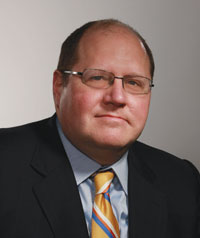 Matthew Feldman ’88’s career as a bankruptcy lawyer should be approaching its pinnacle. At 48 he has been named one of the most innovative minds in law by the Financial Times. And it is his job to help lynchpin firms in sectors ranging from finance to retail to manufacturing navigate financial collapse in the midst of the largest global downturn of the post war era. Yet he knows that no matter who calls next he has already reached the most significant peak of his career. That story began on the day nearly three years ago that he was asked to quit his job, leave his family and move to Washington, DC to help avert a second Great Depression.

Feldman received the call to duty from Ron Bloom and Steven Rattner, senior advisors on President Obama’s auto task force, late on a Friday morning in the spring of 2009. They got straight to the point: Chrysler and General Motors were teetering on the brink of bankruptcy. The stakes were high for the country. GM was the second-largest automaker in the world and employed 400,000 American workers. Its collapse alone could trigger job losses across the entire auto industry. If Chrysler went under at the same moment, it could blow a hole in the American economy.

They wanted Feldman, then-co-chair of the business reorganization and restructuring department of Willkie Farr & Gallagher in New York, to guide both companies through what would be two of the 10 largest bankruptcies in American history. Moreover, in the case of GM, they needed Feldman to pull off what should have been a nine-month job in six weeks so the company could continue to make payroll.

The stakes were high for Feldman, as well. They needed Feldman to resign his partnership with Willkie, terminate all of his clients, accept a pay cut and move to Washington. Ratcheting the pressure up one more level, they wanted Feldman to decide that afternoon and to be in the office at Treasury the following week.

Feldman knew there were no guarantees that his partnership would be waiting for him at Willkie when the job was done. It was also likely that publicly associating himself with a government bailout of two of the largest companies in the world would likely anger several of his most powerful clients.

In that moment, though, these considerations felt almost incidental to Feldman. These were two of the biggest corporate crises of a generation and together they possessed the complexity and urgency that had made him fall in love with bankruptcy law in the first place.

Feldman had not initially intended to become a bankruptcy – or even corporate -- lawyer. He started out wanting to become a litigator and chose to attend NYU Law over the then higher ranked Michigan in 1985 in large part to be closer to his Connecticut-based mother in the aftermath of his father’s death.

During his first two years at NYU Law, Feldman moonlighted for a criminal defense firm that was defending Mafia families. His job? To pick through hundreds of hours of FBI wiretaps looking for moments to prop up the defense. While his friends pursued jobs at large corporate firms, Feldman took a job in 1988 at a small Boston firm that promised to let him devote half his practice to litigation. To his surprise, though, Feldman soon discovered that he preferred corporate law – and particularly the urgency and intellectual challenge of working bankruptcies and reorganizations.

“It’s bang, bang, bang, get it in front of the judge and get it decided,” says Feldman. “Yet, on the other hand, I’ve always been interested in how businesses work, what they’re doing, what the good parts are and what the bad parts are.”

He was offered the opportunity to make bankruptcy the focus of his practice in 1991, when two former NYU classmates called to gauge his interest in joining Willkie’s bankruptcy team. Feldman leapt at the opportunity in part because he was attracted to the challenge and in part to be closer to Theanne, now his wife, whom he had recently started dating and was then a marketing executive at Estee Lauder in New York.

He developed a reputation over the next several years for his creative deals, which ranged from convincing one of the nation’s most venerated retailers that their firm’s value now rested on their real estate holdings to helping hedge funds assume ownership of creditor companies.

He loved the adrenaline rush of helping people in crisis. “You become very close very quickly with your clients,” says Feldman. “Some of my best friends today are people I met because we were up all night for a week straight figuring out how to save their business.”

Yet the financial and personal stakes for his clients were generally so high that the work often came at some cost to his family. Most years he was in the office for one major holiday and on the day his fourth child was born in 2002 he got a call from a senior executive at the Blackstone Group asking him to get on a plane that afternoon to Europe. Feldman was able to buy a few additional days.

So when Bloom asked Feldman to join the GM and Chrysler effort, Feldman knew Theanne wasn’t going to be happy. He told her the news that evening. What exactly, she wanted to know, citing all of the sacrifices they would have to make, was good about this offer?

“Then she stopped and said, ‘You know what? I’m going to skip the fight,” Feldman recalls. “’You should do what you want to do.’”

Over the next several months, Feldman was thrust into the center of Washington power politics. He moved into an apartment building one block from the Treasury Department, where he directly briefed Treasury Secretary Timothy Geithner and Senior White House Economic Advisor Lawrence Summers on a plan for the government to temporarily assume controlling interest of both companies. Working 22-hour days, they guided GM through bankruptcy in 41 days. Chrysler was completed in 42 days. The deals brought both companies back from the precipice and saved hundreds of thousands of jobs.

Feldman, on the other hand, was suddenly unemployed.

The partners at Willkie made clear that he was welcome back. But Feldman wasn’t certain he wanted to return. Perhaps it was time to plot out a new path. Maybe, he thought, he should write a book or become a banker. He took a long vacation with his family. But when he returned, he felt the familiar itch to return to New York and the center of the American economic universe.

Asked now whether he would ever go back to Washington, Feldman isn’t sure. He says that he learned that, where New York is about making money, Washington is about proximity to power. “We had great access to power, which was very, very exciting, but there aren’t that many opportunities [of that sort] in Washington,” says Feldman. Ultimately, he admits, “I’m addicted to crisis.”