Alumna of the Month November 2010 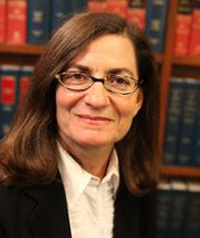 Julie Brill ’85 decided early in life that she would work in public service, inspired in part by the frequent political discussions at her family’s dinner table. As a high school student in South Orange, New Jersey, she volunteered for local legislative campaigns and served as president of the General Assembly for the national Model UN program. Later, at Princeton, she interned in the office of then-New Jersey Governor Brendan Byrne.

As Ms. Brill’s college years wound down, she debated whether a law degree or an economics PhD would give her the greater ability to affect public policy. Then she learned about the Root-Tilden-Kern Public Interest Scholarship at NYU Law. “I thought it would be perfect for me,” says Ms. Brill, noting that the program gave her access to an exciting array of opportunities as well as her community of fellow Root-Tilden-Kern Scholars, who had big plans and diverse interests. “I don’t think I even applied to any other law schools.”

Since she’d gone straight from college to law school, Ms. Brill wanted to leave academia for a year before finishing her law degree. She hoped to see more of the world, and to assist people in need directly. Though some advisers questioned her decision to go to Chiapas, Mexico, to interview refugees from Guatemala’s military regime, Professor Gillers encouraged it. In fact, he helped ensure she kept her scholarship after she returned. “As it turned out,” she says, “my year in Mexico confirmed the depth of the problems that so many people face—and the good I could do using a law degree to find solutions.”

After graduating, Ms. Brill spent a year clerking for Judge Franklin S. Billings Jr. of the US District Court for the District of Vermont. Following her clerkship, Ms. Brill returned to New York to work as an associate at Paul, Weiss, Rifkind, Wharton & Garrison, to bolster her practical experience. “I knew I wasn’t going to practice at a big firm permanently, but I thought it was really important to see what life there was like,” she says. “It gave me some training in how to present myself—and it gave me confidence that those of us in the public interest community are just as capable as our counterparts at big firms.”

A few years later, Ms. Brill relocated to Vermont to take a position in the attorney general’s office. After stints within the civil litigation division, defending the state against constitutional challenges, and as general counsel for Vermont’s Department of Banking, Insurance, Securities and Health Care Administration, a position opened up in the state’s consumer protection division. Ms. Brill jumped at the opportunity. “The division is small, but Vermont faces the same variety of consumer protection and antitrust issues as New York or California,” says Ms. Brill, whose work during that time spanned subjects as diverse as data security breaches, privacy, credit reporting, and consumer access to generic drugs.

Ms. Brill’s advocacy on these issues quickly elevated her reputation, as did her work on the multi-state litigation against tobacco companies. “My boss, the attorney general, would often say I was the best-known assistant AG in the country,” she recalls, laughing.

In the mid-1990s Ms. Brill testified in front of Congress for the first time about the ways in which credit reporting agencies were hurting consumers. The issue had come to light when Vermont residents complained that they were being denied applications for credit based on incorrect information on their credit reports. Ms. Brill and her staff discovered that the credit reporting agencies’ contractors, hired to research town records for bankruptcies, liens, and other credit-related information, had reported as deadbeats hundreds, if not thousands, of people who’d actually paid their taxes. The Vermont investigation helped provide the impetus for the 1996 revision of the Fair Credit Reporting Act.

When the Obama administration began looking for candidates to join the Federal Trade Commission, Ms. Brill’s name quickly rose to the top. She had just moved to North Carolina to head its consumer protection and antitrust division, which is roughly the same size as Vermont’s entire attorney general’s office. Her family—husband Mark Miller, who works in business development for an engineering firm, and teenage sons Zachary and Noah—had remained in Vermont while Ms. Brill got settled in North Carolina. When the White House called, the family put its relocation plans on hold. After Ms. Brill was unanimously confirmed for the FTC post by the US Senate, she and Mr. Miller decided to keep their home base in Vermont.

Ms. Brill now spends weekdays in Washington as one of the FTC’s five commissioners. The agency has a broad purview, including protecting consumers from identity theft, prosecuting scam artists, and advocating on behalf of the public in antitrust matters. Ms. Brill expects to focus on privacy, consumer issues related to the subprime mortgage meltdown, and antitrust issues in healthcare. “As busy as I thought I was in the Vermont AG’s office, and then in North Carolina when I started running a division—it’s nothing compared to what I’m doing here,” says Ms. Brill. “Each of the issues brought up by staff or business or consumer groups is of national import and requires a lot of attention.”

Today Ms. Brill, who spends weekends in Vermont, has had to give up playing tennis and communicates with friends largely by email. But she’s thrilled by the opportunity to represent the public’s interests. “When I speak to law students, I urge them to think outside the box of New York and Washington, to think about public service in the states and in local government,” she says. “There’s a lot of opportunity in those places, and my career demonstrates it.”