Alumnus of the Month January 2011 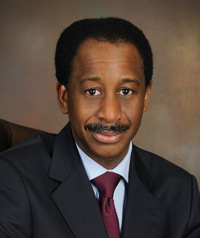 Francis Daniels LLM '86, '87 begins his days at 4:30 a.m. in his Johannesburg study, poring over literature on Africa’s industries, economies, and politics in an effort to determine where he might invest next. To Mr. Daniels, a director of Africa Opportunity Partners, the continent is the equivalent of a company that his role model Warren Buffett would characterize as an investment opportunity with a predictable future. "The development path we’ve seen on every other continent is in its relative infancy in Africa," he says. "To see the future here, all I have to do is look at what has happened everywhere else."

The Oracle of Omaha might seem like an unlikely role model for a son of the Ghanaian elite. But Mr. Daniels also believes that the analytic tools that he developed as a corporate attorney are precisely what have made him successful as an investment manager in Africa.

In 1981, at age 22, Mr. Daniels considered leaving Ghana for better opportunities in the West. He had delayed taking his country's equivalent of the bar exam in favor of completing his state-mandated year of national service, and his uncle, a Ghanaian lawyer, advised him to go abroad. “He thought Ghana was going downhill," says Mr. Daniels, "and that if I remained there, I would stagnate as a lawyer."

When a new government, in which Mr. Daniels had little faith, assumed power through a military coup, he knew it was time to go. "I didn't like the original government, and I was looking forward to casting my vote against it," he says. "I felt the military coup was wrong, though. How dare they abridge the rights of the people?"

In 1982 he went to Canada, where he continued his legal studies at the University of Toronto. His ultimate goal, though, was to practice law in the United States. So in 1985, he enrolled at NYU, where he studied for two degrees. The first, in the school’s one-year master of laws program, earned him his American legal credential. The second was a master’s in corporate law, for which Mr. Daniels says he learned his financial ABCs.

While at NYU, Mr. Daniels became close to securities professor John “Jack” Slain, now professor emeritus, who taught him to think of the practice of law as an instrument of change. "Professor Slain showed me that behind the facts of a case lies a corporate strategy– and also a social reality," says Mr. Daniels.

The idea that law can reflect and have an impact on society resonated deeply with Mr. Daniels, who had witnessed six coups in 16 years in Ghana. At the same time, Mr. Daniels was eagerly absorbing the mechanics of finance in his advanced accounting class, taught by University Professor George Sorter, who is now Vincent C. Ross Professor of Accounting Emeritus.

After completing his second master’s in 1987, Mr. Daniels took a position as an associate with the New York City firm Milbank, Tweed, Hadley & McCloy, where he gained hands-on experience in large corporate transactions. Then the 1990 recession hit, and he was laid off. Though Mr. Daniels was quickly rehired by a new firm, he was shaken by the experience. “I realized that I had very little appetite for risk," Mr. Daniels says. "I wanted to change that attitude, and thought that investing in the stock market was a way to gain experience in volatility."

He began picking stocks for his personal portfolio and was soon devoting every free moment to studying emerging markets. Initially, he didn’t invest in Africa at all. "For three years I paid no attention to Africa," he says. "I was thoroughly bummed out by everything that had happened before I left."

But eventually he came to realize that few people understood the region. So in 1994 he co-founded the Africa Financing Review and began contributing a macroeconomics column. “I can focus very intently on subjects that capture my interest,” says Mr. Daniels. “Through reading, investing, and writing, I learned about the economics of Africa."

Gradually, Mr. Daniels realized that he was more passionate about investing in companies than working for them as an attorney. The opportunity to transition into finance came in 1997, when his wife, Nomsa, was offered a position with JP Morgan in South Africa.

Within a year of his wife’s move, Mr. Daniels resigned from his firm and joined her in South Africa to serve as a legal consultant to a private equity fund called the New Africa Opportunity Fund. Officially, he was an in-house attorney, but he made sure that his job description included some investing responsibilities. Mr. Daniels increasingly focused his attention on investing. He left the fund in 2000, gradually building an investment consulting practice in which he analyzed various equity and debt securities issued by Africa-based companies. By 2007, he had become a fund manager of the Africa Opportunity Fund, a closed-end investment fund managed by Africa Opportunity Partners and traded on the Alternative Investment Market of the London Stock Exchange. “I didn’t think of it as much of a jump,” he says.

The investigative and analytical skills that he developed under Professor Slain’s tutelage, he says, are the same skills that made him a successful investment manager in a region abounding in political, social, and economic uncertainties. From the start, Mr. Daniels prioritized shareholders’ returns over his personal hopes for African development. At the same time, though, he has remained alert to how his investments can spur economic growth and political stability.

In 2008, he visited the conflict-diamond-free Lace Diamond Mine in Kroonstad, South Africa, which had been closed since the Great Depression. The Africa Opportunity Fund financed its reopening. "I saw a group of women sorting diamonds at a picking table. Just six months before, they had all been unemployed with very few prospects," he recalls. "It feels good to know that you are helping."

Mr. Daniels, in turn, hopes that his three children—now seven, eight, and 15—will follow in his footsteps. That means sending them abroad for an American education, fully aware they might fall in love with the West. Still, he hopes they will return home, as he did, to help the continent along its path toward development. “It's important for Africa to show what it has to offer,” he says. "And given the way Africa is working out, my children can have a decent existence here if they want, or they can live in Canada or the United States. Where they end up will be entirely up to them."