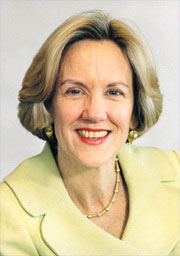 Nancy Duff Campbell is a founder and Co-president of the National Women's Law Center, one of the nation's pre‑eminent women's rights organizations. A recognized expert on women's law and public policy issues, for over thirty years Campbell has participated in the development and implementation of key legislative initiatives and litigation protecting women's rights, with a particular emphasis on issues affecting low‑income women and their families.

Campbell has been named by Working Woman magazine as one of the 25 heroines whose actions over the last 25 years have advanced women in the workplace, and a Woman of Genius by Trinity College. She received a Lifetime Achievement Award from the US Department of Health and Human Services for her work to improve child support enforcement and was appointed by Congress to the US Commission on Child and Family Welfare, to study and make recommendations on a range of issues, including child support, custody and visitation; family services; and family and juvenile court systems. She is the recipient of the District of Columbia Bar's William J. Brennan Award, in recognition of her exemplary legal career dedicated to service in the public interest, and was honored by the Center for Law and Social Policy at its 25th Anniversary Dinner. She has served on the District of Columbia Bar Board of Governors, including its Executive Committee, and currently is a member of the Women Law and Development International Board of Directors, Alliance for National Defense Board of Advisors, Community Tax Law Report Board of Advisors, Institute for Women’s Policy Research Board of Advisors, National Conference of State Legislatures Child Care Advisory Committee and Campaign for Family Leave Income Advisory Committee. She is also a Fellow of the American Bar Association.

What is your area of specialization and how did you come to practice in this area?
My area of specialization is women’s rights law, with a particular emphasis on issues affecting poor women. I decided to go to law school at a relatively young age—twelve—because I wanted to work on civil rights and civil liberties issues. I grew up with liberal parents in a conservative community and spent a lot of my childhood discussing the injustices of the world and the appropriate response to them with my parents. My parents also encouraged me to pursue whatever career I wanted, though it was far more unusual then (the late 1950s) than now for a woman to think about becoming a lawyer. In college in the early 60s, I was actively involved in the civil rights’ movement. I chose to go to NYU School of Law because of the range of courses it offered in civil rights and civil liberties, far more than other law schools at the time. When I graduated law school, I went to work for a national legal services’ support center working on public benefits issues. The primary beneficiaries of public benefit programs then—as now—were women and children, and the second wave of the women’s movement was just beginning, so the two areas of law came together for me in the late 60s. In the mid-70s I left active practice to teach law, first at Catholic University and then at Georgetown Law Center, for four years. In 1978, I left teaching to work for the women’s rights project of one of the first public interest law firms in the country; in 1981 my co-president and I “spun this project off” to become the independent National Women’s Law Center, where I have been for over 25 years.

What is the most prevalent issue you face when addressing women’s rights?
The fact that despite all the progress that has been made for women in the last 35 years, the high poverty rates of women and children are so persistent.

Describe recent legal developments in the area of women’s rights; where do you see women’s rights in 5 years?
Until the last few years, women were making steady progress toward full equality. But we’ve seen a period of backsliding – especially at the federal level. A conservative President and conservative majorities in Congress are nominating and appointing federal judges who disagree with core principles establishing the right of women to equal protection of the laws and key civil rights laws and protections important to women. Massive tax cuts are squeezing the federal budget, curtailing investments in key programs for women and their families, such as child care and health care. Efforts have been launched to radically change or weaken key laws protecting women by privatizing Social Security or curtailing Title IX, which prohibits sex discrimination in federally funded education programs. Reproductive rights are under assault from several quarters, and the Supreme Court is one vote away from overturning Roe v. Wade. Much of the National Women’s Law Center ’s work in the last few years has been to defend against these onslaughts, and we have had some important victories. But we have had a more difficult time pressing a proactive agenda, though, again, we have had some important successes. I hope that five years hence we will have been able not only to protect, but also to advance, women’s legal rights in significant ways.

How has the perception of women’s rights changed over the past 30 years?
There is now widespread acceptance of the principle that women’s opportunities should be equal to men’s, but a fair amount of disagreement still in working out what that means in practice.

Describe a case or matter that you worked on that you found particularly challenging or rewarding.
Here’s one that was rewarding because it was a small change with a big impact. In 1982, after Congress improved the child care tax credit to target more of its benefits to low-income families, the Center successfully pressed IRS to include the credit on the “short form” 1040A. (Previously it could only be claimed on the “long form” 1040.) We argued that if the credit could not be claimed on the 1040A, Congress’ intent would be thwarted, because low-income families use the 1040A far more than the 1040. We used an obscure IRS process for commenting on tax forms to make our case, and successfully enlisted support for the change from key members of Congress. In just the first year in which the credit was added to the 1040A, 1.4 million more families claimed the credit.

What is the most rewarding aspect of your job?
Working with an incredible, committed staff on key issues for women and their families and achieving concrete, measurable results.

Who are your role models in the legal profession?
Justices William O. Douglas, William Brennan and Ruth Bader Ginsberg.

What drives you to be such a strong advocate for women’s rights?
I have a strong sense of justice and equality that was instilled by my parents.

What was your first job out of law school?
I was a staff attorney at the Center on Social Welfare Policy and Law (now the Welfare Law Center).

How do you balance work and life?
Not as well as I’d like! With my children now grown and living in another city, the pressures aren’t the same as they were earlier in my career, and even then I had a highly supportive work environment at the Center. Outside of work, I read, socialize with friends, exercise regularly, and try to escape to a family cabin in the Adirondacks or to visit my children (and new grandson) with my husband whenever I can.

If you could chose another profession to be in, what would it be?
In my childhood it was to be the “batgirl” for the Cincinnati Reds, since I couldn’t even dream of being a baseball player. Today, even with far more options open to women, I can’t imagine choosing to be anything but a lawyer.

What advice would you give to current students?
Follow your heart. You’re going to spend most of your waking hours on the job, so find one you’ll enjoy!