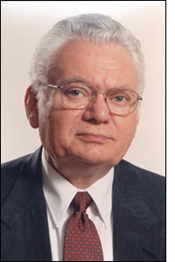 Read an Interview with Thomas Buergenthal.

Thomas Buergenthal currently serves on the International Court of Justice. Prior to his election to the Court in March 2000, Judge Buergenthal was the Lobingier Professor of Comparative Law and Jurisprudence at The George Washington University Law School. His previous academic positions included, inter alia, the Fulbright and Jaworski Professorship at the University of Texas (Austin) and the Deanship of the American University's Washington College of Law (Washington, D.C.).

In addition to his J.D. degree from NYU School of Law, where he was a Root-Tilden Scholar, Judge Buergenthal has the following degrees: B.A. from Bethany College (Bethany, WV), LL.M. and S.J.D. from Harvard Law School, and various honorary degrees.

What role do you see for the International Court of Justice in the future?
In the past few years, the Court's docket has grown very substantially. Also the types of disputes referred to the Court cover an ever greater range of subjects. These developments are likely to accelerate in the years to come as states gain greater confidence in the Court as an impartial judicial institution. It is very likely, therefore, that in the future the Court is going to play an ever more important role in the peaceful resolution of international disputes.

What do you see as the future of the fight for Human Rights?
I see the threat of terrorism and the reaction to it by governments as the most serious threat to the progress the world has been making in protecting human rights.

What is the most rewarding aspect of your job?
Seeing governments seek the Court's assistance in settling their disputes and having them comply with the Court's judgments.

If you could, would you give additional power to the Court?
It is premature to do so at this time while the Court is still in the process of gaining full acceptance from the international community.

How do you balance work and life?
My wife and I try to take advantage of the many opportunities that living more or less in the center of Europe provides, although the Court's current caseload does not leave too many free weekends. Of course, living in The Hague also means that we are far away from our children and grandchildren (in the U.S. and Costa Rica), which is one of the real negatives of our life here.

If you could chose another profession to be in, what would it be?
Professor of comparative literature. To think that one would be given the time and be paid to read good books not just in one's spare time but as a permanent professional assignment!

What advice would you give to current students?
Remember that the best paying jobs are not necessarily the ones that will bring personal satisfaction or enable you to feel that your work is worthwhile from a human rather than from a monetary standpoint.

What was your first job out of law school?
Instructor in Legal Method, University of Pennsylvania Law School.

Who are your role models in the legal profession?
The many judges in different parts of the world who, despite threats to their lives and in the face of political and economic pressures, have the courage and professional integrity to administer justice impartially and humanely.