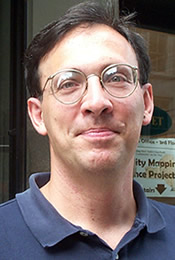 Read an Interview with Chris Meyer.

Since March 1997, Chris Meyer has been the Executive Director of the New York Public Interest Research Group (NYPIRG), New York State's largest student-directed research and advocacy organization. Mr. Meyer has been with NYPIRG since he graduated from Haverford College in 1981, save his three years at New York University School of Law. Mr. Meyer supervises a staff of more than 80 full-time staff in 23 offices throughout the state.

What is the overall mission of The New York Public Interest Research Group (NYPIRG)? How do you use your position as Executive Director to achieve this mission?
NYPIRG 's mission is to effect social change in New York State by marrying the intelligence, idealism and energy of college students with a professional full-time staff of policy advocates and organizers. My job as executive director is to implement the vision of the student board of directors by hiring and supervising the staff (now 80 operating in 23 offices statewide), preparing the annual $6 million budget and prioritizing resources.

What do you believe are the two most critical issues facing the public today? How has NYPIRG dealt with this issue?
I think the single most critical issue facing the public is reinvigorating civic life and civic literacy. The traditional political checks and balances (the two-party system, a vibrant media) have been overwhelmed by corporate interests whose moneyed voices crowd out public accountability and leave the public cynical and despairing. NYPIRG knocks on one million doors a year to educate the public about environmental, consumer and good government issues; we register more than 10,000 students and community members every year; NYPIRG maintain s a strong watchdog presence at City Hall and the state capitol; and we invest a tremendous amount of time teaching students the skills necessary to become effective civic leaders.

You were named "Best Lobbyist" by New York Magazine in 1993 and called a "civic patriot" by New York Post columnist Jack Newfield in 1997. To what do you attribute your inclination towards serving the public interest?
I am a product of my home environment and the turmoil of the 1970s. My mother taught the value of serving others through her church teachings, and my father introduced me to the best vehicle for community service when I found myself at the age of six handing out leaflets for his friend and future boss John Lindsay when Lindsay first ran for mayor in 1965. My politics were formed in my teens watching the Vietnam War and Watergate unfold and solidified by my college years at Haverford College , which put a premium on collective social action .

You began your career at NYPIRG as an entry level project coordinator at the College of Staten Island. How did being a part of your campus's NYPIRG chapter shape your career? Why are NYPIRG chapters found on so many campuses?
I got hooked on grass roots activism when NYPIRG hired me, fresh out of college in 1981, to work in my home borough at the College of Staten Island. Our big issue that year was trying to pass state legislation to create the "bottle bill," a five-cent deposit on all carbonated beverage containers. I did park clean-ups, organized a coalition made up of environmentalists, conservationists, even bicyclists upset with riding on broken glass. Our small "green" band joined with similar coalitions throughout the state on a three-week walk across New York State to demonstrate public support for the bill. When (then) Governor Hugh Carey signed the bill in the summer of 1982, I felt as if a small part of that victory was mine. That was an intoxicating feeling, one that I have tried to replicate among our campus chapters every year.

Students have formed chapters at 21 colleges and universities throughout New York State because they, too, see the potential of putting their idealism to practical use by lobbying their elected officials, organizing community forums and staging news conferences based on reports they helped research .all on issues they care about.

How have new trends in technology affected grass roots efforts?
The Internet has revolutionized grass roots political work. We have a database of almost 100,000 student and community supporters that we can activate through one key punch. These supporters can make a phone call to their elected official, attend a local meeting or send a contribution to NYPIRG. Less obviously, but equally crucial, the Web has made running an organization far easier. Policy research can be done more quickly, email allows me to use my time far more efficiently and my staff can use the Internet opportunistically to organize events on little notice.

In what ways do you measure the success of NYPIRG
There are tangible and intangible ways to measure NYPIRG's success. We have played a critical role in passage of more than 150 pieces of state and municipal legislation; organized some of the largest mass rallies in the country 's history; and written hundreds of reports on mass transit, higher education funding, prescription drug prices, bank fees, election reform and many other public policy areas.

But I get far greater satisfaction when I hear about a student who is now involved as a civic leader because she or he once attended a NYPIRG student conference or interned with our Albany legislative staff. There are thousands of professionals who owe their current careers to their start as a NYPIRG student or entry level staffer.

Who are your role models in the legal profession?
I respect lawyers who have stretched the parameters of the law and the legal profession to make systemic change. I have always admired Supreme Court Justice William Brennan, not just for his supple legal mind, but for his ability to get to five votes on the Court when his cause seemed hopeless. Ralph Nader reinvented the role of citizen-lawyer and made consumer advocacy a national cause; his legacy should not be his late turn to partisan politics, but his ability to create lasting institutions for social change. And I greatly admire my friend, colleague and fellow Class of '89 alum Jill Chaifetz for using her legal skills as head of Advocates for Children to fight the New York City Board of Education bureaucracy on behalf of low-income parents.

How do you balance work and life?
It hasn't always been easy, but I have a tremendously supportive family. My wife, Susan Stamler, also started her career with NYPIRG and understands really well how to blend long work hours with the 24-7 responsibilities of parenthood. (She is a full-time social service advocate with the United Neighborhood Houses.) We are blessed with two fabulous girls, Emily and Rachel, who not only put up with two working parents but get into what we do. On Election Day, for example, I drag one of the girls into my office to help with our nonpartisan voter hotline, and Susan sometimes takes the other one to do more partisan electioneering. In return, Susan and I do our best to be a big part of the girls ' lives, although as they enter the teen years, they do their best to limit our involvement!

If you could choose another profession to be in, what would it be?
Rock star. Sometimes I get envious of Steven Van Zandt, who gets to be part of two great entertainment ensembles: Bruce Springsteen's E Street Band and The Sopranos. Seriously, one day I would like to be a professor. A part of my current job that I love is teaching young people that they can make a difference. One day maybe I will get to fuse my love of politics, law and teaching and start a law school clinic on legislative practice.