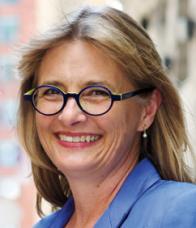 Vicki Been ’83; Jonathan Lippman ’68, chief judge of the New York Court of Appeals; and Catherine Amirfar ’00, a litigation partner in Debevoise & Plimpton’s International Dispute Resolution Group, have been elected to the American Law Institute (ALI), a leading independent organization dedicated to producing scholarship that clarifies and modernizes the law. The ALI has more than 4,400 top attorneys, judges, and law professors in its ranks who are "intellectual leaders in every area of law."

Been, former director of NYU’s Furman Center for Real Estate and Urban Policy, pursues research on improving decision-making about building more resilient communities, the role of historic designation and other regulations in shaping development patterns, and the fairness and effectiveness of foreclosure responses such as mortgage modifications. In February she was appointed commissioner of the New York City Department of Housing Preservation and Development by Mayor Bill de Blasio.

Lippman became chief judge of New York’s highest court in 2009 after four decades of service in the court system. A passionate advocate nationally for access to justice and judicial leadership and innovation, he previously served as chief administrative judge of all New York State courts; presiding justice of the Appellate Division of the Supreme Court, First Department; a justice of the Supreme Court for the Ninth and 10th Judicial Districts; and a judge of the New York Court of Claims.

Been’s election makes 30 faculty who belong to the ALI, and her two fellow alumni inductees join more than 100 other existing ALI members who graduated from NYU Law. Dean Emeritus Richard Revesz will become the ALI’s new director in May.