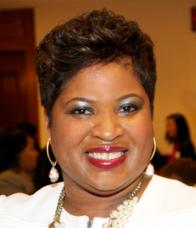 Linda Gadsby ’92 was the recipient of this year’s Woman of Distinction Award from NYU Law’s Women of Color Collective. At a celebratory banquet, which was themed “Building Bridges: Creating Opportunities,” students and alumnae gathered to honor Gadsby, who also sits on the board of the Law Alumni Association and serves as an advisory board member of the Black, Latino, Asian Pacific American Law Alumni Association.

In a heartfelt speech, Gadsby spoke about her personal journey into the legal profession. Though she was born in London, her family moved to the South Bronx, where she spent her childhood. “I was a very shy child initially,” Gadsby said, though there was no evidence of this in her poise behind the podium. Encouraged to join the forensics club at school, Gadsby said, “To my surprise, I was actually very good at public speaking.”

Gadsby attended Stuyvesant High School in downtown Manhattan, commuting every day from the last stop on the number-five train in the Bronx to Union Square, which, she noted, was very different from the Union Square of today. “It really opened my eyes,” Gadsby said.

Gadsby left New York City to study industrial and labor relations at Cornell University, before returning to the city to get her degree at NYU Law. On how she decided that she wanted to become a lawyer, Gadsby said, “looking back, I think it was a combination of watching Perry Mason and being totally enamored with Thurgood Marshall.”

Now, as vice president and deputy general counsel at Scholastic, Gadsby is responsible for handling all labor and employment law issues for the company’s 7,000 domestic employees, as well as international labor and employment issues in locations including the UK, Canada, and Puerto Rico. “Building bridges is what I do,” Gadsby said, noting that in her role as an employment attorney, she serves as a bridge between employees and employers.

However, Gadsby also emphasized the importance of building bridges outside of one’s personal career, and making sure to give back by creating opportunities for others. Quoting Shirley Chisholm, a seven-term congresswoman for New York’s 12th district and the first African-American woman elected to Congress, Gadsby said, “Service is the rent we pay for the privilege of living on this earth.”

Gadsby is the living embodiment of this mantra. In addition to her work at Scholastic and her active involvement in the alumni associations at her alma mater, Gadsby also serves as a teen advisor for Jack & Jill of America, on the board of the Young Barbadian Professionals Society, and as an advisory board member of the education non-profit Practice Makes Perfect. Several of Gadsby’s former mentees were in fact present that evening to share in the celebration.

Gadsby urged the students and young alumnae in attendance to think, not only about how to achieve their own goals, but also how to help others. “We are our sisters’ keepers, and I truly believe that we will rise or fall together,” Gadsby said. “I also want to challenge you to reach back. I want you to take an interest in our younger generation. Make a commitment to take one girl under your wing, and serve as a mentor to her…. There’s no greater pleasure than being able to help another person succeed, or take a step towards what they want to do in their life."