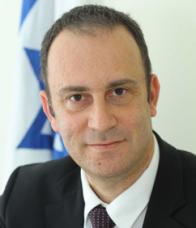 Roy Schöndorf JSD ’07 was born in Israel in 1973. He was just six weeks old when the Yom Kippur War erupted and his father was drafted into military service as a reserve. “It’s not something that I myself remember,” says Schöndorf. “But it was a very difficult war, and certainly made an impact on my upbringing and even my choice to pursue a career in international law.”

After receiving an LLB and an MA in law and economics from Tel Aviv University, Schöndorf served as a senior legal advisor in the international law department of the Israeli Defense Forces (IDF) Military Advocate General Unit, where he played an active role in peace negotiations with Israel’s neighbors, including Syria, Jordan, and the Palestinians.

“Working on peace negotiations, making peace, was a very meaningful thing for me,” Schöndorf says, recalling particularly his role as part of the Israeli delegation to Shepherdstown, West Virginia, where Israelis and Syrians came together in 2000 to negotiate the terms of a possible peace treaty. “I was quite young at the time, I was 26 or 27, and just to be able to observe the people participating in these discussions, let alone to contribute was a very significant experience.”

“I learned a lot in this process about international law and the role it played in these kinds of negotiations—both the role it can play but also its limits,” says Schöndorf. He adds that it was a particularly significant experience for him on a more personal level, as someone who was born into the last war with Syria—the Yom Kippur War—“to be able to be there and meet people that there was no way for an Israeli to meet then… to meet them in person and be able to exchange views about the future of our region, of our children, of our countries.”

Schöndorf credits his experience at NYU Law with broadening his horizons and expanding his understanding of various issues in international law. “I came from Israel, where there’s a lot of focus on issues related to Israeli-Palestinian, or Arab-Israeli conflict. At NYU I was exposed to so many other issues, global issues,” he says. He also had the opportunity, during one of his summers, to intern at the International Criminal Tribunal for Rwanda with Judge Erik Møse, who would later become its president.

After his time at NYU Law, before returning to governmental work, Schöndorf spent several years working at Debevoise & Plimpton in New York. There, he says, he was not only exposed to international arbitration and economic law in practice, but he also learned about the management of a law firm. This experience was particularly helpful when, in 2010, he was asked to establish the Department of Special International Affairs, a new department in Israel’s Ministry of Justice.

“He came into the Attorney General’s office already as head of a department, which is kind of rare, to bring someone from the outside rather than someone from within. But he brings exceptional skills, training, and experience,” says Oren Bar-Gill, Evelyn and Harold Meltzer Professor of Law and Economics, who has known Schöndorf since childhood. Growing up in the same northern suburb of Haifa, Israel, Bar-Gill and Schöndorf attended high school and law school together—where they were even roommates for a while—and overlapped in the IDF, as well. “Roy has always been kind of a star, a standout, absolutely brilliant,” Bar-Gill says.

Daniel Geron LLM ’02, who began his studies at NYU Law at the same time as Schöndorf, and who is now a senior attorney specializing in international law in Israel’s Ministry of Justice, describes Schöndorf’s meteoric rise in the field of International Law as a result of the very high regard in which he is held across government ministries. “I think everyone recognizes that he understands the intricacies of international law, and the sensitivities of the issues particularly well, and he’s able to explain the complexities to the people who need to ultimately make the decisions.”

Though he has only been in his position for a few weeks, Schöndorf has already made several international trips in his new capacity as deputy attorney general—including a visit to the US, where he met with his counterpart in the Department of Justice. “I’m very excited, looking to the future, about this opportunity,” Schöndorf says. “I certainly hope to continue and try to maintain Israel’s position as a leader in international law.”