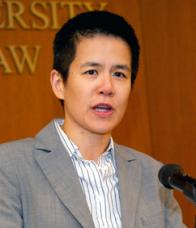 Christine Sun '98 detailed her personal and professional journeys as both LGBTQ individual and advocate when OUTLaw, NYU Law’s LGBTQ student organization, honored her with its Alumnus of the Year Award at its annual Alumni Reception on January 30.

Sun, a regional staff attorney at the American Civil Liberties Union’s Immigrants’ Rights Project, has a long history of civil rights advocacy. Before turning to immigration law, she had worked as deputy legal director at the Southern Poverty Law Center, where she oversaw its economic justice work and efforts on behalf of the LGBT community. Sun had previously been senior counsel for the ACLU’s LGBT and AIDS Project, serving as lead counsel on cases involving LGBT individuals in the Deep South. Upon graduating with honors from the Law School, Sun clerked for Judge Robert Carter of the US District Court for the Southern District of New York, and then worked at both Cleary Gottlieb Steen & Hamilton in New York and Keker & Van Nest in San Francisco. In 2010, the National LGBT Bar Association named Sun one of the “Best LGBT Lawyers Under 40,” and in 2012, NYU’s Black Latino Asian Pacific American Law Alumni Association gave her a Distinguished Alumna Achievement Award.

The honoree explained to the audience that, despite fighting for the civil rights of others, she had been a late bloomer in her own self-realization. “When I was in law school, I really could not have imagined being here,” said Sun. “I know that sounds like false modesty, but that’s actually true, because when I was in law school I was not out. I wasn’t even out to myself.” Her self-acknowledgment came shortly after graduating from NYU, but Sun still kept her sexual orientation from the judge (and former civil rights lawyer) for whom she clerked and the LGBT-friendly law firm for which she worked subsequently.

When Sun made it through the closet door at last, she found a world of difference. “I could finally focus on my work,” she said, “and learning the craft of being a lawyer without the nagging distraction that comes from hiding an important part of oneself. Removing that barrier allowed me to focus on what I was capable of doing, and not so much on who I was.”

Her personal progress did not erase setbacks in her professional endeavors. Sun spoke movingly of a stinging loss early in her first stint at the ACLU, when she failed to prevail in a case on behalf of a lesbian high school student who had suffered discrimination at the hands of school officials when she came out.

The unfortunate outcome haunted Sun for months. “To this day,” she said, “if I think about that case I still feel a slight wave of nausea. But even with all of that, I wouldn’t trade that experience for anything. Although it makes sense for our movement to celebrate our many victories, I want to remind us that we also need to celebrate our losses. First, we should celebrate the losses because of the courageous people that were part of those losses…. More importantly, if you don’t know what it’s like to lose you will fear it, and that fear will stop you from taking risks—risks that you need to take in order to be truly successful.”

Sun has lived that philosophy, most recently by switching to immigrants’ rights work after nearly a decade of LGBT legal advocacy. She knew she would have to learn a whole new area of substantive law, prove herself to an entirely different legal community, and face the risk that she might not succeed in that field.

“These were risks I was willing to take on,” said Sun, “so that I could continue to challenge myself, to make sure that the amazing education that I got from law school was being used to its fullest.’”