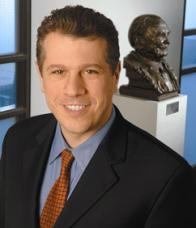 Michael Waldman '87, president of the Brennan Center for Justice, has been garnering praise recently for his new book, The Second Amendment: A Biography, which considers how the right to own a gun was “written” into the Constitution through judicial interpretation.

Published by Simon & Schuster, the book is divided into three broad sections: the early history of the Second Amendment, underscoring its original purpose to ensure that white male citizens would have a rifle available for use in state militias; how the National Rifle Association began lobbying for the right to own a gun in the 1970s, which eventually led to the 2008 Supreme Court decision in District of Columbia v. Heller in favor of gun ownership; and the legal ramifications of Heller, including its effects on efforts to curb gun violence.

In the New York Times, Joe Nocera wrote, "In his rigorous, scholarly, but accessible book, Waldman... wants to understand how it came to be that the Second Amendment, long assumed to mean one thing, has come to mean something else entirely. To put it another way: Why are we, as a society, willing to put up with mass shootings as the price we must pay for the right to carry a gun?" Other major media outlets recognizing Waldman's work include the Los Angeles Times ("his calm tone and habit of taking the long view offers a refreshing tonic in this most loaded of debates"); Kirkus Reviews ("This thoughtful, accessible survey of Second Amendment law will be useful to anyone arguing either side of this endlessly controversial issue"); and Publishers Weekly ("Waldman relates this tale in clear, unvarnished prose and it should now be considered the best narrative of its subject").

Waldman has been president of the Brennan Center for Justice since 2005. From 1995-99, he was director of speechwriting for President Bill Clinton. In that role, he was responsible for writing or editing nearly 2,000 speeches, including four State of the Union and two Inaugural Adresses. He also served as special assistant to the president for policy coordination from 1993-95. Prior to his government service, Waldman served as executive director of Public Citizen's Congress Watch, was a lecturer in public policy at Harvard's John F. Kennedy School of Government, and a partner at a litigation law firm in New York and Washington, DC. His earlier books include My Fellow Americans: The Most Important Speeches of America’s Presidents from George Washington to Barack Obama (2003, 2010); A Return to Common Sense (2007); POTUS Speaks (2000); and Who Robbed America? A Citizens' Guide to the S&L Scandal (1990).