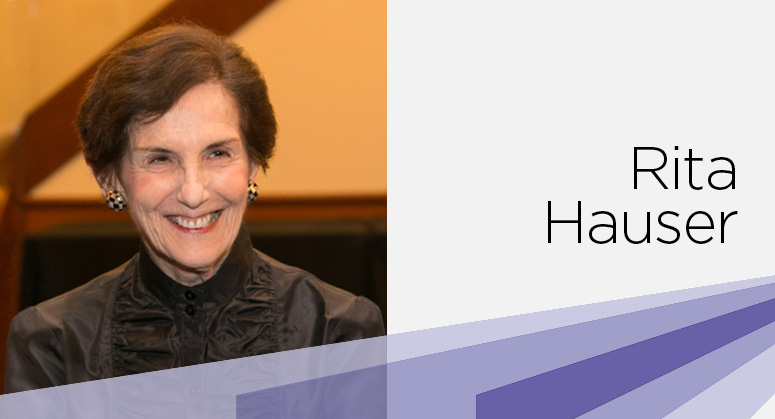 Alumna Rita Hauser, a former ambassador to the United Nations Commission on Human Rights, has made a significant new gift as part of the Law School’s Lead the Way Campaign, to support the Hauser Global Law School Program.

A trustee of NYU Law, Hauser with her husband Gustave Hauser LLM ’57 established an international program for the study of law intended to create a community of global practitioners and leaders, as well as legal scholars and Law School faculty. The program has distinguished NYU Law as a global law school. The novel approach of the program, established in 1995 and renamed the Hauser Global Law School Program in 2002, has brought together postgraduate lawyers, foreign law faculty, and postdoctoral fellows to NYU Law each year to study, co-teach, and research with their American counterparts—with cross-cultural benefits for all.

“In our global economy, lawyers must be able to understand perspectives and systems across borders,” Hauser said. “As the Hauser Global Law School Program has matured, I am delighted that it has brought so many leading experts and scholars from around the world to NYU Law, so that our students can benefit from a truly cross-cultural legal education.”

Since the creation of the Hauser Global Law School Program, other top law schools have followed NYU Law’s lead in creating a program to study not just “international law,” with its traditional focus on regulating state behavior, but law from a global perspective.

The program encompasses more than faculty: It also includes 10 to 20 scholarships for foreign lawyers to pursue their LLM degrees, fellowships for academics, government officers, and lawyers from abroad, and a distinguished global fellows rotation of two-week visits to NYU Law.

Now president of the Hauser Foundation, Hauser was a senior partner for more than 20 years at the New York City law firm Stroock & Stroock & Lavan. She served both George W. Bush and Barack Obama as a member of the President’s Intelligence Advisory Board and chaired the International Peace Institute, a think tank for United Nations-related matters, from 1993 to 2016.

In recognition of her achievements, Hauser was awarded the Law School’s Judge Edward Weinfeld Award in 2008, and in 2006 the Albert Gallatin Medal, presented each year to a member of the NYU community who makes an outstanding contribution to society. In 2004, she received the Vanderbilt Medal, the highest honor bestowed by NYU Law.

Hauser is a director of Lincoln Center for the Performing Arts in New York City and served as a director of the New York Philharmonic-Symphony Society for more than 20 years.