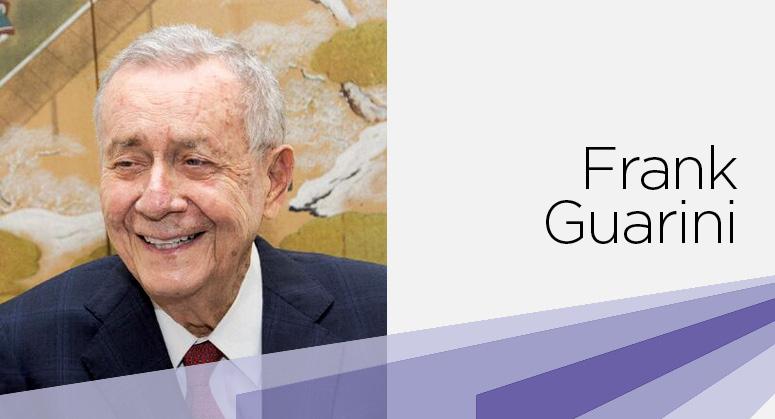 With a significant donation, the Honorable Frank J. Guarini ’50, LLM ’55 has helped to establish the Guarini Institute for Global Legal Studies at NYU Law.

The Guarini Institute extends the Law School’s international reach by building on existing programs and introducing new ones, including the Guarini Global Law & Tech program, which emphasizes the transformation of legal practice in the global digital landscape.

“Our increasingly international world needs lawyers who can meet the complex challenges presented by a changing global and technological landscape,” said Guarini. “Lawyers continue to be the business facilitators central to understanding other countries that knit the world together. NYU Law is already at the vanguard of global legal education and faculty research, and I am proud to support the Law School in its mission to not only train future leaders in law, business, and public policy, but to remain ahead of the curve when it comes to the global legal landscape.”

Guarini previously funded the Frank J. Guarini Center for Environmental, Energy and Land Use Law, the Frank J. Guarini Leaders in Government Service Institute, and the Guarini Government Lecture. A naval navigator in the Pacific during World War II, Guarini received the Navy Commendation Medal and three Battle Stars. Following a career in law and real estate investment, Guarini served two terms in the New Jersey State Senate and seven terms in the US House of Representatives. He also served as a delegate to the North Atlantic Treaty Organization and as US representative to the United Nations General Assembly. Italian President Giorgio Napolitano awarded him Italy’s highest honor, the Knight of the Grand Cross of the Order of Merit of the Italian Republic.