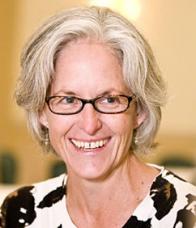 Vickie Patton ’90 came to law school knowing that she wanted to work in environmental law. Having graduated from the University of Arizona with a degree in hydrology, Patton had a technical background; as a law student, she worked with professors such as Lawrence King Professor of Law and Dean Emeritus Richard Revesz to gain the legal expertise she needed to work in the field.

"As a student, Vickie was extraordinary, unusually mature, and passionately committed to a career in environmental law," says Revesz. While still in law school, Patton interned with the Natural Resources Defense Counsel (NRDC), where her background in hydrology came in handy as she conducted legal and technical research on a set of injection wells operating in the United States with few protections for underground sources of drinking water.

"I prepared the analysis that was the basis for a set of regulatory recommendations—policy solutions that were at the intersection of law and technical issues,” says Patton. “The work experience during law school helped me understand the opportunities for law students and law graduates to make a difference—because I was able to lay out solutions for policy-makers, as a path forward to address a serious threat to our nation's drinking water."

Following her stint at the NRDC, Patton interned as a 3L for the EDF, and after graduating law school, joined the general counsel’s office of the Environmental Protection Agency (EPA). Now, as general counsel of the EDF, Patton works on the frontlines of environmental law. She also manages the EDF’s climate and clean air legal and regulatory programs.

"One of the most profound challenges that society faces, that communities face, and that our families face, is the race against time to reduce global warming pollution," Patton says. "The nation’s clean air laws provide for the most important safeguards available under existing law to make meaningful progress in our own country in reducing climate pollution."

Similar to her initial work at NYU Law 25 years ago, Patton’s main focus is advocating for protective and well-designed environmental solutions and then defending them against legal challenges. "It is inexorable, and unfortunate, that there will be extensive litigation challenging the measures that the EPA and leading states put in place to protect human health and the environment from climate pollution," Patton says. "EDF works hard to advocate in a way that mobilizes cost-effective solutions, builds a strong and durable legal record, fosters broad support, and then works with leading legal experts like NYU’s Institute for Policy Integrity to defend these protective measures in court."

One current case that Patton is working on involves the EPA’s Mercury and Air Toxics Standards, which limit pollution emissions from power plants. The EDF successfully defended these protections before the US Court of Appeals for the DC Circuit, but on November 25, the Supreme Court announced its intent to review the case. "EPA’s life-saving limits on mercury, arsenic, and acid gases from smokestacks are thoroughly anchored in law and science, and we look forward to presenting a compelling case for these vital clean air safeguards to the Supreme Court," Patton told the Wall Street Journal after the Supreme Court’s announcement.

Patton also points to the recent Supreme Court ruling in EPA v. EME Homer City Generation as "a landmark important legal victory" in favor of clean air. The decision, which upheld the EPA’s health protections under the cross-state air pollution rule "affirmed the application of the Clean Air Act's good neighbor provision in a way that will provide vital and cost-effective public health and environmental protections for 240 million Americans," Patton says.

It was particularly meaninful, Patton says, to see that the opening passages of Justice Ruth Bader Ginsburg’s majority opinion in that case cited a highly-regarded 1996 article written by Revesz. "These were the very topics that I had studied at law school under Dean Revesz. Working with Dean Revesz has provided the extraordinary opportunity to see the arc of progress from the study of cutting-edge intellectual theory at NYU Law to real-world clean air protections for millions of Americans upheld by the Supreme Court," Patton says.

Patton and Revesz have now been working together on environmental legal protection for about 15 years. "Even though she’s steely in her determination to get this program implemented—she calls the control of greenhouse gases the defining issue of our time—there’s never an edge to her," says Revesz of his former student. "She is a wonderful person for both allies and adversaries to work with, and she’s enormously well-respected in the environmental community, as a thought-leader, and as someone with great strategic insights and extraordinary vision. She is perhaps the most influential legal strategist defending the Obama administration Clean Power Plan—the most important effort to date to control greenhouse gases in the United States."