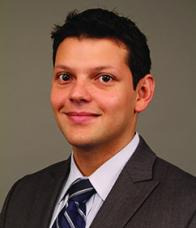 In a decade as a public service lawyer, Iván Espinoza-Madrigal ’05, now executive director of the Lawyers’ Committee for Civil Rights and Economic Justice, has worked on a wide range of civil rights issues, including LGBT rights, immigration rights, and evolving HIV law and policy. From his start at the Mexican American Legal Defense and Educational Fund (MALDEF) to his current position, Espinoza-Madrigal has worked to build bridges between communities.

Espinoza-Madrigal’s passion for public service law developed, he says, from his own experience as the son of a single mother who brought him and his brother to the United States from Costa Rica when he was nine years old. “Growing up in my community, and witnessing the challenges that my mother had to overcome, were really formative in terms of allowing me to see the needs on the ground,” Espinoza-Madrigal says. “I have family members who are undocumented, and family members who didn’t have health insurance until the Affordable Care Act came about a year ago, so I still continue to see those needs in a very personal way.”

His desire to serve his community led him to NYU Law, where he was a Sinsheimer Service Scholar participating in the Root-Tilden-Kern program and a student in the Immigrant Rights Clinic. “The Root offered an infrastructure, community, and support structure that really provided a home for me while I was in law school,” he says.

Following law school, Espinoza-Madrigal received a Fried Frank/MALDEF Fellowship, spending two years as a litigator for Fried, Frank, Harris, Shriver & Jacobson LLP, then two years as a staff attorney with MALDEF in Texas. During his time at the firm, he worked on the legal defense of an innovative municipal program in New Haven, Conn., that provides undocumented immigrants with an ID that allows them to receive city services they would not otherwise be able to access. Similar programs have now been rolled out in San Francisco and New York—victories for immigrant rights that would not have been possible without the precedent set in New Haven.

While in Texas, Espinoza-Madrigal remembers, he was especially struck by the lack of LGBT equality there. “It was particularly evident after having lived in New York and being in a space that was really accepting and welcoming,” he says. “I was really eager to think about ways I could advance LGBT advocacy, doing the same type of work that I had been doing on behalf of Latinos.” When he eventually returned to New York, Espinoza-Madrigal joined Lambda Legal as a staff attorney, where he built an initiative on behalf of LGBT people of color, LGBT immigrants, and low-income LGBT communities.

Brian Chelcun ’13, who worked with Espinoza-Madrigal during a summer internship at Lambda Legal, praises him as a mentor and colleague: “He’s a really good advocate, not just for the cause that he is working for, but also the people he is working with: his peers, colleagues, and friends. He’s looking out for everyone.”

Espinoza-Madrigal’s work at Lambda Legal eventually led to his appointment as the first legal director of the Center for HIV Law and Policy, where he was able to continue developing his intersectional approach to civil rights law. In one 2014 case, he successfully defended a woman who was Latina, transgender, and undocumented, and who was being deported for engaging in survival sex work while HIV-positive. “It was certain that she was going to be placed in harm’s way and subject to violence and persecution if she was deported,” Espinoza-Madrigal says. “So we did a robust defense, asserting the fact that her identity at the intersection of all of these vulnerabilities, instead of being a reason to deport her, is actually a reason to protect her.”

Richard Saenz, a senior staff attorney with Queens Legal Services who focuses on LGBT rights and HIV law, speaks of Espinoza-Madrigal as part of a new generation of leaders in the field: “Iván is a fresh face, bringing new perspective and ideas. He gets it; he’s able to look at issues around poverty and racism, and HIV issues and LGBT rights, not as siloed issues, but how they all connect to each other.”

Espinoza-Madrigal plans to set an inclusive agenda for the Lawyers’ Committee for Civil Rights and Economic Justice, which he began leading in April. “I want to do advocacy that allows a broader swath of people, a broader set of communities and individuals, to see themselves reflected in the civil rights agenda,” he says. “We need to make sure that people feel comfortable and safe and protected regardless of their background, even when they have overlapping identities or overlapping challenges. We have to keep an eye out for people who might fall through the cracks.”