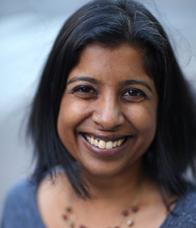 Sadie Nash Leadership Project (SNLP) works with young women ages 11-22 to explore the concept of social justice and to recognize and amplify their individual and collective leadership. For Chitra Aiyar ’04, who took on the role of executive director in 2013, it is the perfect place to realize her career-long mission of ensuring the dignity of marginalized people and calling attention to their stories.

Aiyar arrived at NYU Law in the fall of 2001 knowing that she wanted to do social justice work. Two weeks after her classes had begun, the 9/11 attacks took place. Aiyar subsequently became active with Andolan, a Queens-based organization for female South Asian immigrant workers, where she focused on issues of post-9/11 racial profiling and fair wages for domestic workers.

As Aiyar’s career has evolved, she has maintained her work with Andolan, serving as co-chair of the organization’s board. Recently, Aiyar co-produced Claiming Our Voice, a documentary film that follows domestic workers creating a theater performance in which they tell their stories. “The lesson for me, from making the film, was that I thought people would want to tell their stories, and they did, but they didn’t want to talk about domestic work. They’d be like, yes, I’m an exploited worker, but that is actually not my main identity,” Aiyar says. “Sometimes the way that we as advocates define people can inadvertently dehumanize them in order to advance a broader goal.”

Following law school, Aiyar worked at the Brennan Center for Justice, and then, hungry to see the inside of a courtroom, spent eight years as a legal services attorney at African Services Committee. Aiyar credits the organization with giving her broad exposure to a number of issues including housing conditions, HIV confidentiality breaches, and deportation defense. Although she was passionate about her work, Aiyar found herself frustrated with the need to oversimplify her clients’ stories in order to act as their advocate. “I worked with undocumented, HIV-positive African and Caribbean immigrants, and they were a complicated and hugely diverse population, but not necessarily viewed as such,” Aiyar says. “When you’re an advocate, sometimes your job is not to complicate the story. I struggled with that.”

“Chitra has an almost superhuman level of energy and an unwavering commitment to justice,” says Nikki Reisch ’12, who interned for Aiyar at African Services Committee and is now legal director of NYU Law’s Center for Human Rights and Global Justice. “I’ve been constantly amazed by the depth of her understanding in working with people from marginalized backgrounds, and her commitment to building leaders who really bring their own lived experiences and wisdom to the table.”

While working at African Services Committee, Aiyar also taught courses at Hunter College and New York Law School. Aiyar credits her experience as a student of Professor Derrick Bell with informing her approach to teaching. Bell’s influence was particularly significant when she eventually began teaching a constitutional law course to high school students in the SNLP’s Summer Institute. “We talked about issues like parental consent for abortion and juvenile death penalty cases, using real Supreme Court cases, in the same way that we did in Professor Bell’s class,” Aiyar says.

When Aiyar became executive director of SNLP, she knew that she was taking charge of a well-functioning organization. A recent 10-year study found that the overwhelming majority of young women who participate in SNLP programs are more civically engaged and more likely to graduate from college. Aiyar recognizes this success, but insists that the power of Sadie Nash is in its ability to create collective consciousness.

“I think there’s a place for individual success stories, but that’s really different than measuring what collective upliftment looks like—when people feel excited about going to college and their opportunities, but also feel responsible for supporting their sisters,” she says.

An important part of building a collective conscience, Aiyar says, is helping young people identify and name the structural oppressions that they may face, such as racism or sexism. “What Sadie Nash is trying to do is to name these things, and in that way have young people feel individually empowered, but also feel that we need to change these structures together.”