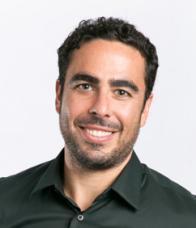 Understanding the Sony hack and the Snowden revelations is more than a curiosity to Ramsey Homsany ’00, general counsel of file storing and sharing service Dropbox. It’s a professional responsibility. In a career that began at Wilson Sonsini followed by Google, Homsany has built up deep expertise in taking on the legal issues raised by emerging technologies that are rapidly changing the world.

As a biochemical engineering student in college, Homsany found his calling in a course on ethics in engineering. “I realized how important it was for technologists to understand the legal environment, and for lawyers to understand technology. And before I knew it, I was applying to law school,” Homsany says.

“He really was one of the nicest people that you can imagine in law school—clearly a very smart guy, but also a very thoughtful and considerate person,” says Troy McKenzie ’00, professor of law on leave and deputy assistant attorney general at the US Department of Justice Office of Legal Counsel. “We graduated right when the dot-com bubble was popping. And I can distinctly remember thinking to myself, poor Ramsey, he’s off to go work at a law firm in Silicon Valley, and, gosh, this is the wrong time to do something like that... and of course, it was absolutely the right move for him to make. Little did I know just how well it would turn out.”

After a few years at Wilson Sonsini, focusing on technology licensing, deals, and intellectual property law, a former colleague convinced Homsany to join Google, a relatively new company at the time. Tasked with building Google’s legal team in New York to support the company’s advertising business, Homsany initially encountered resistance toward Google’s innovative technology. “I couldn’t even get the lawyers at the New York ad agencies to talk to me for a while,” he says. “They didn’t want to hear it; they wanted us to do things their way, until they saw the actual product starting to actually disrupt the traditional model of how companies get consumers' attention.”

He had no plans or inclination to leave Google until he met the founders of Dropbox. But after visiting their operation, he was deeply impressed. “I had been through this revolution in terms of how people dealt with public information, and what I saw at Dropbox was there was going to also be this incredible revolution around how people interact with their own information,” Homsany says.

Transitioning from his role at Google to the position of general counsel at the much smaller Dropbox was not without its challenges; he had to shift from focusing deeply in one area of the law to managing all aspects of a company’s legal operations. “I felt like I had gone from being the head of surgery at Sloan Kettering to being chief of all medicine at a wartime clinic,” Homsany says. "Early on in a startup, you can't get every issue perfect. You have to keep the patients alive and keep things moving."

Now, one of his top priorities is data privacy and security—key issues for a company that users trust to safeguard their documents, photographs, and other digital media. Under Homsany’s legal guidance, Dropbox has become one of the first companies to publish a transparency report, which shows the world the degree of access to user data that governments have sought, and also the extent to which Dropbox has complied with or resisted these requests. Homsany has also taken the lead on advocating for policy reform, meeting with policymakers in Washington to discuss the laws that govern surveillance and access to data.

“The most rewarding part of my time here has actually been building our incredible legal department, which is full of people who are passionate about technology.” Homsany says. “I’m very comfortable saying that this is the best team in the business defending people’s information, and helping bring this incredible technology to—for now—hundreds of millions, and eventually billions of people around the world.”

Ted Wang, corporate partner at Fenwick & West, who works with Homsany as an outside counsel to Dropbox, praises his legal acumen. “Ramsey has done an incredible job at skating that fine line between complying with the law, but at the same time maintaining user privacy, and protecting the users’ interests to the maximum extent possible under the law,” he says.

Wang also notes Homsany’s skill at developing talent and bringing out the best in his team: “He really is a wonderful person—not just technically excellent at what he does, but a person for whom you want to do your best work.”