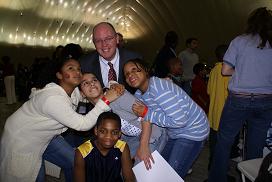 Read an Interview with Kevin Ryan.

Kevin M. Ryan is the first commissioner of the New Jersey Department of Children and Families and serves as a member of Governor Jon S. Corzine's Cabinet. He previously served as the commissioner of the Department of Human Services in 2006 and as New Jersey's first child advocate from 2003 to 2006. Before becoming child advocate, Ryan represented homeless youth at Covenant House in New York City’s Times Square, the South Bronx, Newark and Atlantic City.

In 1997, he founded Covenant House New Jersey's Youth Advocacy Center. Over the past ten years, the Center has provided legal services to thousands of homeless youth. Ryan has helped to craft some of the state's most important social legislation, including the Homeless Youth Act, the Family Care Act, the Foster Care Scholars program, the establishment of the Office of the Child Advocate and the legislation creating the new Department of Children and Families. Harvard Law School recognized his work in 2000 by naming him a Wasserstein Fellow.

Ryan has taught at Fordham Law School, Seton Hall Law School and Rutgers Law School focusing on Poverty Law, Children and the Law, and Constitutional Law. He is the author of numerous articles on poverty, children and the interests of families.

Before receiving an LLM from NYU School of Law in 2000, Ryan received a BA from The Catholic University of America in 1989 and a JD from Georgetown Law Center in 1992.

What is the mission of New Jersey’s newly created Department of Children and Families (DCF), and why was it created?
The agency’s mission is to achieve safety, permanency and well-being for children, and to strengthen families across New Jersey. The new department operates the child welfare system, the children’s behavioral health and a division dedicated to preventing child abuse and neglect. The Legislature and Governor Jon Corzine created the new department in 2006 to provide a sharper focus to statewide public efforts to keep children and families strong.

What is your biggest challenge as the department’s first commissioner?
The biggest challenge is tackling the reform of the child welfare system while framing the effort as larger than improvement of the traditional child protection system. Government is never going to love children as families do and must, so genuine reform must involve strategies to strengthen families.

Can you tell us about New Jersey’s Child Welfare Reform and how DCF fits into the plan?
The reform plan seeks to embed in the child protection system the training, supervision and support necessary for child welfare workers to ensure the safety of children. This often involves making tough judgments in tough neighborhoods at all hours of the day and night. But just as importantly—and I really mean just as importantly—the reform aims to achieve stability and well-being for children by strengthening their families. We have got to develop a child welfare system in this country that appreciates the fact that strong families are the key to strong communities. If we think the solution is just about strong detective work and ferreting out abuse and neglect, we’re deeply mistaken.

What led you to become such an impassioned advocate for children?
It’s pretty simple, really. I like kids.

You founded The Youth Advocacy Center at New Jersey’s Covenant House in 1997. Can you tell us about the Covenant House mission, and how you came to be the founder of that program?
Covenant House is the country’s largest nonprofit agency serving homeless youth. After I graduated from law school, I worked for five years with kids at Covenant House in Times Square, the south Bronx and Bedford-Stuyvesant, mostly in housing and family court. After that, I crossed the Hudson River and spent just under five years at Covenant house New Jersey, working with kids in Newark and Atlantic City. We founded The Youth Advocacy Center there as a legal aid and public policy center to advance the interests of homeless youth. We fought off federal juvenile crime legislation that would have permitted states to detain runaways in secure lock-ups with adults, expansions in health insurance for children and access to trans-permanent housing for youth who are aging-out of foster care.

You had already accomplished so much in your field by the time you came to NYU School of Law to get your LL.M. in 2000. Why did you decide to go back to school at that time, and why did you choose NYU School of Law?
I wanted to study under the great public interest and constitutional legal scholars on the faculty, like Marty Guggenheim, Peggy Cooper Davis, Larry Sager and Martha Davis. The time I spent in their classrooms made me a more thoughtful advocate for families.

Did you ever have moments of doubt about your chosen career path, where you were tempted to take an easier path?
No, not really.

You have played a key role in shaping some of New Jersey’s most important social legislation on behalf of the state’s children. What do you think is the most transformative legislative act that has been passed during your career in child welfare?
I think the enactment of the Foster Care Scholars program is probably one of the most exciting changes I have seen over the last five years. The law provides college tuition grants to kids in foster care, homeless youth and youth who were adopted from foster care. When I worked at Covenant House in the late 1990s, only a couple of kids would get into college each year. Today, in the same program, there are more than 75 kids enrolled in college. That program has lifted hundreds of kids into futures of economic opportunity.

How do you stay positive and present for your own six children when you see the atrocities that so many of our nation’s children are up against? Do you think your work has affected the way that you parent your children?
My current job consumes a lot of time—as it must. There’s no question my family has made sacrifices for me to do this work. My wife and I are in this together and we’re trying to set an example for the kids about the requirements of service and the virtue of advocating for a cause one deeply believes in, but I wish I never had to miss one of their baseball games, school plays or basketball tournaments.

What is your favorite thing to do when you are not working?
Spend time with my kids.

How do you maintain a balance between your work and the rest of your life?
It’s not easy.