Many leading intellectual figures on the international legal stage are judges or government officials whose duties prevent them from spending more than a week or so away from home.  To gain the benefit of such people in our community, some of whom are former academics, the Hauser Global Law School Program invites them to campus as Distinguished Global Fellows.  During their brief visits, the distinguished fellows may participate in selected classes, seminars, colloquia, or other occasional lecture series such as the Distinguished Global Fellows Lecture Series. 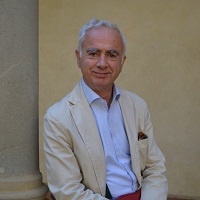 He spent much of his career in the UK, first at King’s College, Cambridge, for his doctorate (1983) and as a Research Fellow (1984-1991). He was then at the University of Oxford, including as a University Reader at All Souls College (1995- 2003) and as a Professor of Sociology and an Official Fellowship of Nuffield College (2003-2012), where he is now an Emeritus Fellow. Diego then moved to the European University Institute in Florence with a chair in social theory (2012-2018). He has been visiting professor at the University of Chicago, The Italian Academy at Columbia University, EHT Zurich, Science Po, Stanford University, and Collège de France. In 2000 Diego was made a Fellow of the British Academy.