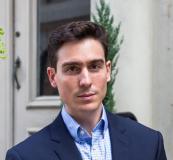 Peter Robau’s research interests include securities regulation and enforcement, financial systems, and law and economics. As the 2021-2022 Wagner Fellow, his focus is on analyzing the impact of regulatory policy and enforcement on capital formation, as well as developing the Securities Enforcement Empirical Database (SEED).

Before joining the NYU Pollack Center for Law & Business, Peter served as an associate at Kirkland & Ellis LLP where he was a member of the Investment Funds Group. His practice focused on issues arising under the Advisers Act and Investment Company Act, CFTC issues, compliance and SEC enforcement, as well as regulatory issues in connection with private equity transactions and fundraising. Previously, Peter was an associate in the financial services group at Cadwalader, Wickersham & Taft LLP.

Peter is a New York City Bar Diversity Fellow. He holds a J.D. from the New York University School of Law, and is admitted to the New York bar.

The Leonard Wagner Fund for Professionalism in Law & Business honors Leonard Wagner, who spent a long and productive life on Wall Street and was said to reflect the highest levels of ethical behavior in his personal and business dealings. The fund supports activities that promote ethical conduct in business and law.

Thanks to a generous grant of the Leonard Wagner Testamentary Trust, the Center for Law & Business offers a one-year graduate research fellowship to help develop future law academics with an interest in the social control of business institutions and the social responsibility of business.

Applicants must hold a JD or LLM degree and have practiced law for two years. Preference is given to applicants with a research interest in the legal regulation of business and ethics, and to those who have a degree from NYU School of Law. Fellows are expected to make a full-time commitment to their graduate research at the center. Involvement in Pollack Center research ventures is required.

We accept applications for the 2022-2023 academic year, the applications must be received by May 16th 2022. Applicants must submit the following materials*:

*Not all materials are required for every applicant.  Please inquire regarding required materials.

Please direct all materials to Stephen Choi and David Yermack, Directors. We prefer that you first e-mail materials to Anat Carmy-Wiechman at wiechman@mercury.law.nyu.edu, followed by a physical copy mailed to the NYU Center for Law & Business at 139 MacDougal Street, Room 116, New York, NY 10012.

Applications for the 2022-2023 academic year must be received by May 16th 2022 and they will be reviewed by the center’s selection committee. Please direct inquiries to Anat Carmy Wiechman at wiechman@mercury.law.nyu.edu or (212) 992-6173.

Patrick Corrigan
Patrick Corrigan’s research interests include banking law and regulation, structured transactions, regulatory policy and law and economics. As the 2017-2019 Wagner Fellow, his focus is on analyzing the corporate governance implications of the equities activities of banks and their affiliates.

Before joining the NYU Pollack Center for Law & Business, Patrick served as an associate at Sullivan & Cromwell LLP where he advised financial institutions clients on mergers and acquisitions, structured transactions and regulatory issues related to the Bank Holding Company Act and the Volcker Rule. Prior to attending law school, Patrick worked at the Consumer Financial Protection Bureau where he helped implement a risk-based approach to supervision.

Patrick is the author of a Note on the authority granted to the Consumer Financial Protection Bureau under the Dodd-Frank Act to regulate abusive acts and practices and is the co-author of papers in the areas of administrative law and behavioral law and economics. He holds a J.D. from the New York University School of Law. He holds an M.P.P. from the Harvard Kennedy School of Government, from which he graduated in 2011. Patrick is admitted to the New York bar.

Maximilian Riege
Maximilian Riege’s research interests include antitrust, regulatory compliance, and anti-money laundering law. As the 2016-2017 Wagner Fellow, his focus is on individual accountability for corporate wrongdoing as part of the antitrust enforcement regimes in the US and the EU.

Before joining the NYU Pollack Center for Law & Business, Maximilian served as Partner at Hambach & Hambach in Munich, Germany, where he advised clients from the banking, FinTech, and online gaming industries. He also practiced in-house with T-Mobile’s parent company, Deutsche Telekom AG, in its global headquarters in Bonn, Germany, and at Redeker Sellner Dahs in Brussels, Belgium.

Maximilian is co-author of a legal commentary on anti-money laundering and online gaming regulation, and has published various articles on these topics. He holds an LL.M. in Competition, Innovation, and Information Law from NYU School of Law. He also studied law at the University of Passau, the Complutense University of Madrid, and the University of Bonn, from which he graduated in 2009. Maximilian is admitted to practice law in Germany and New York.

Anat earned her LL.M. degree from NYU School of law in May 2011. During her studies at NYU School of Law, she served as a research assistant to Professor Stephen Choi and as a teaching assistant to Professor Mary Holland. Upon graduation, she served as an associate at Tuckner Sipser Weinstock & Sipser, LLP until accepting the position of a junior research scholar with the NYU Pollack Center for Law & Business in September 2013. She has published in the American Law and Economics Review, and in the Precedent and the Law: Reports to the XVIIth Congress International Academy of Comparative Law, Utrecht, 16-22 July 2006.

Ofer Eldar
Ofer Eldar’s research and teaching interests include corporate law, organizational design, law and economics, and international economic law. His current research focuses on the law and economics of social enterprise and hybrid forms of organization. Ofer earned his LLM from New York University School of Law and his BA in law from Cambridge University. He is also a JSD/MA candidate at Yale’s Law School and economics department. Between 2005 and 2009, Ofer practiced as a corporate attorney, first in London with Freshfields Bruckhaus Deringer, and from 2007 in New York with Weil Gotshal & Manges. You may review his SSRN page by clicking here.

David Webber
David’s research and teaching interests include securities and corporate law, corporate governance, shareholder rights, and class actions. Prior to becoming a Wagner Fellow, David litigated securities and corporate law cases in New York and clerked for a federal judge. David graduated from NYU Law, where he was a notes development editor for the New York University Law Review and a Lawrence Lederman/Milbank Tweed Fellow in Law and Business. He graduated magna cum laude with his BA from Columbia University, where he was elected to Phi Beta Kappa. This summer, David will join the faculty of Boston University Law School as an Associate Professor of Law.

His primary research interests are in industrial organization, with a particular focus on antitrust and regulatory policy, political economy, and contract law, with a particular focus on psychology and economics. His recent work includes an examination of the behavioral underpinnings of the necessity defense in tort law and election-by-lot as a judicial selection mechanism.

Florencia Marotta Wurgler
Florencia’s research and teaching interests include commercial law, e-commerce, contracts, corporate law, economic analysis of law, and bankruptcy. Florencia’s recent research has focused on the efficiency implications of standard form contracting. She has conducted two empirical studies based on a large sample of software products’ End User License Agreements (EULAs). In one paper, entitled, “Are ‘Pay Now, Terms Later’ Contracts Really Worse for Buyers? Evidence from Software License Agreements,” she examines whether sellers who engage in the increasingly common practice of disclosing their standard contract terms (EULAs) after the buyer has already purchased the product offer more restrictive terms than sellers that make their contracts available before purchase. Contrary to what critics of this form of contracting have suggested, her results show that delayed disclosure of terms does not meaningfully affect contract bias. Thus, to the extent that there are inefficiencies associated with the use of standard terms in mass contracting, they are not made worse by delaying disclosure. In a second paper, in progress, she examines the extent to which EULAs are shaped by the competitive conditions that characterize various software markets.

Florencia received a JD from the NYU School of Law in 2001 and a BA in Economics from the University of Pennsylvania in 1996. In 2003-04, Florencia was the Corporate Fellow at the Center for Corporate, Securities, and Financial Law at Fordham Law School, where she taught the Corporations course. From 2001 to 2003, she was an associate in the corporate group at Davis Polk & Wardwell.

Barak Y. Orbach
Barak was the first recipient of the Wagner Fellowship. Originally from Israel, Barak’s teaching and research interests include antitrust, behavioral law and economics, and corporate finance and social welfare, among many. He received his doctorate in law from Harvard Law School in 2002, where he wrote his dissertation, “Essays in Legal Aspects of Competitiveness.” Barak received his LLB amd his BA in economics from Tel Aviv University, and his LLM from Harvard Law School.