Troy McKenzie ’00, Cecelia Goetz Professor of Law at NYU Law and a scholar whose research focuses on bankruptcy, civil procedure, and complex litigation, has been selected as the new dean of the Law School. He will succeed Trevor Morrison, who steps down from the deanship on May 31 after nine years in the position.

“[Troy] is widely admired for his good judgment, his equanimity, his respectful treatment of colleagues, his wide-ranging scholarly interests and support of colleagues, his readiness to mentor and support students, his dedication and work ethic, and his manifest love of the school,” NYU President Andrew Hamilton said in announcing McKenzie’s appointment. “His range of experience, which encompasses both private law and public law, is highly respected and considered a great asset. He has compiled a great record of achievement and exceptional service within the field, the profession, and the University. He is, in short, an outstanding choice to lead NYU’s School of Law, one of the finest law schools in the world.”

“Troy is a brilliant lawyer, a gifted scholar, an exceptional teacher, and an ideal colleague,” says Dean Morrison. “He cares deeply about our Law School. He will be an outstanding dean and I am thrilled to pass the baton to him.”

“After going through a robust search process involving many excellent candidates, I’m delighted to see Troy emerge as our next dean,” says David Tanner, Chair of NYU Law’s Board of Trustees. “We are all so proud to have one of our own—an NYU Law alum—take on this important leadership role for the institution.” 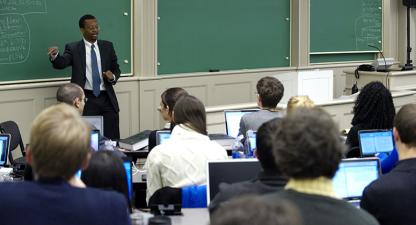 “Troy is the ultimate institutional citizen—beloved by every member of our community (students, faculty, staff, trustees, alumni) for his years of outstanding service, scholarship, and teaching,” says Vice Dean Rachel Barkow, Charles Seligson Professor of Law, who chaired the 12-member search committee. “He is the embodiment of the outstanding leaders NYU produces, and I have every confidence he will be a successful dean.”

McKenzie, who received his JD from NYU Law in 2000 and joined the Law School’s faculty in 2007, teaches courses that include Bankruptcy, Complex Litigation, Procedure, and the Supreme Court seminar. In 2008, after just a year at the Law School, he received the Albert Podell Distinguished Teaching Award, which recognizes outstanding achievement in the classroom by NYU Law faculty. In 2020, he was one of six NYU faculty members to receive the University's Distinguished Teaching Award. McKenzie’s former students have praised him for a vibrant teaching style and accessibility to students. “He is just somebody who was always willing to help and mentor,” Subash Iyer ’13, chief counsel of the Federal Transit Administration, said of McKenzie in a 2018 NYU Law News article. In the classroom, McKenzie has said, he finds great benefit in using the Socratic method not as “an instrument of terror, but a means of opening up materials to careful, thoughtful, lawyerly investigation.”

McKenzie also serves as faculty co-director of two centers at NYU Law, the Center on Civil Justice and the Institute of Judicial Administration. Prior to his arrival at NYU Law as a professor, he clerked for Judge Pierre N. Leval of the US Court of Appeals for the Second Circuit and Justice John Paul Stevens of the US Supreme Court, and he worked for the law firm Debevoise & Plimpton as a litigation associate. In 2015, he took a public service leave from NYU Law to join the Department of Justice’s Office of Legal Counsel as a deputy assistant attorney general, then returned to the Law School in 2017. 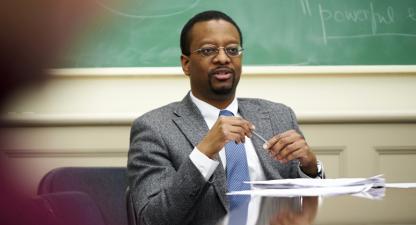 “NYU Law became my home when I arrived as an admitted student 25 years ago, and I am profoundly honored to serve in this role,” McKenzie says of his new appointment. “The Law School has been in excellent hands during Dean Morrison’s nine years at the helm. Thanks to his tremendous work, the Law School is on a very positive trajectory, and I am excited to build on that. I look forward to engaging with the entire community to realize the extraordinary potential of the Law School.”

McKenzie, born in Jamaica, moved to the United States at age five with his family and grew up in Irvington, New Jersey. In 1993, he entered Princeton University, where he received a degree in chemical engineering. But a campus lecture by US Supreme Court Justice Antonin Scalia sparked an unexpected interest in law. “I liked the give-and-take style of argument,” McKenzie noted in a 2007 NYU Law News profile. Upon graduation, he turned down an engineering job to enter NYU Law, where he was active in the Black Allied Law Students Association and received an award for most outstanding Law Review Note, a paper about sovereign immunity in bankruptcy. “I got a first-rate education,” McKenzie said in the 2007 article, “and fell in love with the place.”