Founded in 1952, the Institute of Judicial Administration at New York University School of Law (IJA) is dedicated to the judiciary and continues today as a leader in judicial education and a forum for non-partisan thinking and discussion about the administration of justice.

The work of the Institute has become ever more critical with the proliferation of federal and state laws, the increasing workload and public profile of the courts, process changes ushered in by the pandemic, and the growth in adjudicative bureaucracies.

The Institute is operated by staff under the guidance of Faculty Director Professor Samuel Estreicher. The Board of Advisors of the Institute consists of distinguished state and federal jurists, law scholars and practitioners, and Dean Troy McKenzie who formerly served as faculty co-director of IJA. The Board is chaired by Evan R. Chesler, Cravath, Swaine & Moore LLP.

The Institute of Judicial Administration is pleased to announce IJA Co-Faculty Director Troy McKenzie has been named Dean of NYU School of Law.

On October 25, 2022, IJA held the 27th Annual Brennan Lecture on State Courts and Social Justice. Judge McLeese's lecture, "Trying to Write Fair Opinions," discussed the value of writing procedurally fair opinions and offering techniques and thoughts to do so. Watch the lecture here. 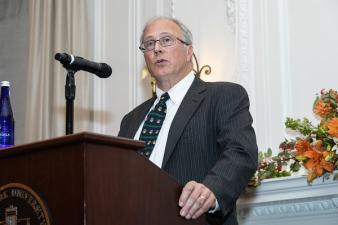 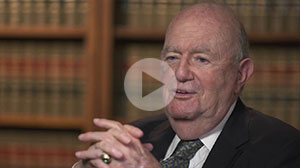 Watch the IJA Oral History of Judge Laurence H. Silberman, Senior United States Circuit Judge, United States Court of Appeals for the District of Columbia Circuit. The interview was held on May 17, 2017, in Judge Silberman's chambers in Washington, DC. It was conducted by Paul D. Clement, former US solicitor general.

Justice Pollock was a Root Tilden Scholar. In 1985, NYU Law awarded him the Arthur T. Vanderbilt Medal alumni honor. He has been a trustee since 2008. He also served several years on the IJA Advisory Board and as a faculty of IJA's New Appellate Judges Seminar. Justice Pollock delivered the second annual IJA William J. Brennan, Jr. Lecture in State Courts & Social Justice on "The Art of Judging" in 1996. The NYU Law Review dedicated their 1999 Volume 74, Issue No. 5, to Justice Pollock. He also contributed two articles for the Annual Survey of American Law. One was in the 1984 Volume, Issue 1, on "Land Use: State Constitutions, Land Use, and Public Resources: The Gift Outright." The other was in the 1998 Volume, Issue 2, on "School Finance in the Courts 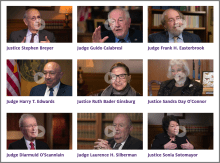 The Oral History of Distinguished American Judges memorializes the contribution of the men and women who make the US judiciary a bulwark of freedom. This project goes beyond their written opinions to focus on education, careers, influences, and views of the judicial role.

Each video interview has an accompanying annotated transcript. Together, these interviews form a definitive resource on the American judiciary, not just for legal scholars, but for all those interested in our system.