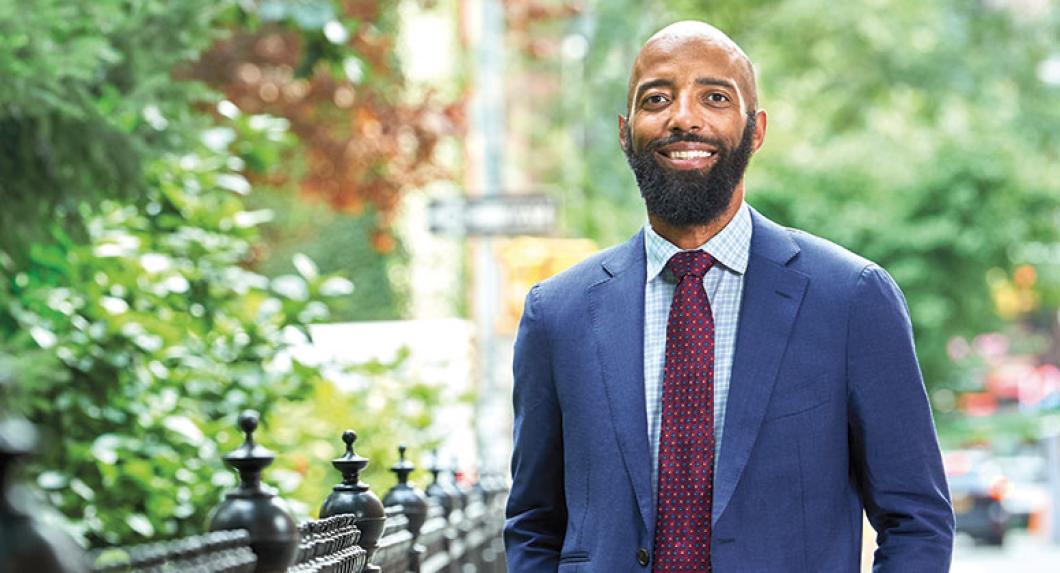 In 1991 Vincent Southerland was 13 years old when he watched news footage of Rodney King being beaten by police officers. The experience connected the issues of race, policing, the criminal system, and US history in his mind for the first time, recalls Southerland. Not long after, he delivered his eighth-grade oration on that topic.

Combating racial inequality and injustice has been central to his work as a lawyer and teacher. After serving as a public defender and as senior counsel at the NAACP Legal Defense and Educational Fund (LDF), he became the inaugural executive director of NYU Law’s Center on Race, Inequality, and the Law (CRIL). In July, Southerland took on a new role at the Law School as assistant professor of clinical law. He will direct the Criminal Defense and Reentry Clinic, which he taught in the 2019-20 academic year.

Southerland not only litigates tenaciously but is also “a creative policy advocate, a brilliant scholar, and a skillful orator,” says Assistant Dean for Public Service Lisa Hoyes ’99, who worked with Southerland at the Bronx Defenders and has also codirected the Root-Tilden-Kern Program and the Latinx Rights Scholars Program with him. She adds: “I’m thrilled that our students will have the opportunity to learn from him and prepare to follow in his footsteps.”

After studying political science and sociology at the University of Connecticut, Southerland obtained his JD at Temple University Beasley School of Law. He clerked for Judge Theodore McKee of the US Court of Appeals for the Third Circuit and Judge Louis Pollak of the US District Court for the Eastern District of Pennsylvania, then landed an E. Barrett Prettyman Fellowship at Georgetown University Law Center, where he was a clinical instructor in the Criminal Justice Clinic while earning an LLM in trial advocacy.

Working as a staff attorney at the Bronx Defenders, as senior counsel at LDF, and as assistant federal defender at Federal Defenders of New York, Southerland says he repeatedly saw a frustrating arc in the lives of most of his clients: “Inevitably, their stories were rooted in some issue of poverty, mental health challenges, deprivation in terms of employment or education, physical health, addiction. You see people basically being warehoused as a result of all the other institutions that have failed them throughout their lives.” In 2017 he joined NYU Law for CRIL’s launch.

“I’ve always had a lot of admiration for NYU Law as an institution,” he says. His wife is an alumna: Ndidi Oriji ’03, senior vice president for advertising and program standards at NBCUniversal. Professor of Clinical Law Emeritus Anthony Thompson, whom Southerland met while working at the Bronx Defenders, has been a mentor and friend. Thompson says that Southerland’s “sharp intellect, fierce advocacy, and incredible patience make him a once-in-a-generation lawyer…. The NYU community is fortunate to have him.”

Southerland will continue as a faculty co-director of CRIL next year after a leave of absence. “The work we’ve done at the intersection of race and technology and the criminal system has been significant,” he says, noting, “We’ve also been able to play a role in shaping broader local and national conversations around the use of technology in the criminal system and the ways in which racial injustice can be exacerbated or replicated by using those types of tools.”

He’s looking forward to this fall. “I’m really excited about the institution and about the road ahead, and thrilled about having this class of students I’m going to get a chance to teach,” he says. “Even though I’m standing in front of the room, I think about the teaching piece as all of us learning together.”