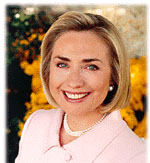 I don't have the advantage of the previous speakers, all of whom possess a unique and personal vantage point on Hillary Rodham Clinton. Yet even though I don't know her, it still seems possible somehow to speak about her with equal passion and conviction. When someone like Hillary Rodham Clinton is the object of praise, someone who is so much a part of our national consciousness and culture, it is easy to pay tribute. In explaining what prompted the Editors of Annual Survey to invite Hillary Rodham Clinton to be our Dedicatee, I'd like to share with you a book which I read several years ago by anthropologist Mary Catherine Bateson, the daughter of Margaret Mead. The book, entitled Composing A Life, explores the act of creation that engages us all -- the composition of our own lives. Through the comparative biographies of five women, Bateson develops a novel theory about how to assess and value contemporary living. The author invites us to view life as an improvisational art form: that transitions, diverse priorities, and challenges are not merely a part of our lives, but should be seen as a source of wisdom and empowerment. The book explains how, in modern times, it is no longer possible to follow the paths of previous generations. Our energies are often not narrowly focused on achieving a single goal, but are more divided, needing to be continually rebalanced and redefined. I refer to this book, and Bateson's theory, to illustrate the strength and diversity of Hillary Rodham Clinton's life. The Editors selected her as this year's Dedicatee because she serves as an example of the successful composition of a life, and as a role-model for those who will encounter the complexities of modern-day living. When faced with needing to divide her energies - between family, work, and public service - Hillary Rodham Clinton has inevitably achieved an artful balance. She has managed priorities and combined her multiple commitments. Because we live in a society which is often recalcitrant to accept change, people are frequently admonished for innovation and self-reformation. In our estimation, though, this flexibility demonstrates strength of character and wisdom. Hillary Rodham Clinton has adjusted quickly, finding ways to affirm herself and her skills in new environments.

In order to advance her convictions, she has remained flexible in the complex world of politics and the law, while holding firm in her fundamental resolve. Certain that her values and her choices are important, she has adhered to the goals of improving education for children, establishing legal services for the poor, creating opportunities for women, and providing health care for all. Rather than pursuing a route already defined and established, she has practiced stepping off the expected road and cutting herself a new path. By redefining traditional notions of women and their place in this world, Hillary Rodham Clinton has neither played it safe, nor lived a life free of risk. In doing so, she has emerged not only successful and productive, but as an essential figure in the unabating struggle for equality. Although Hillary Rodham Clinton's accomplishments and choices may be particularly encouraging and motivational for women, they are equally applicable to all people. Each of us has something to learn from how she has composed her life; she upholds her values and pursues her aspirations in a way which serves as an inspiration to us all. In many ways, law school teaches us to play it safe, to make calculated and planned decisions about our lives and to execute that plan. The model for an ordinary, successful life offered to us is one of a single rising trajectory, and of focused ambition that follows a predetermined track. After graduating from law school, we are expected to take a job that symbolizes the first step on a sole, ascending ladder. In this day and age, though, I am not convinced that these assumptions will be, or should be, valid for many of us.

As our lives unfold, we need a new and fluid way to imagine the future, and looking to the life of Hillary Rodham Clinton helps us to gain this insight. From her example, we can draw an appreciation of a lawyer who has not been afraid to change or explore new prospects. She has worn many professional labels, always proceeding to new situations with graceful transitions. As a member of the faculty at Arkansas she made contributions to the academic and clinical world of law, as a member of a prominent firm she excelled in private practice, and as a mother she managed a home and cared for her family. As an advocate for children she has continually sought the public good, and as First Lady of the United States, she has navigated the world of politics, the media, and policy making. When young people so often lament the scarcity of positive role models, Hillary Rodham Clinton is someone from whom we can learn, and derive empowerment to realize our possibilities.

As Annual Survey's 52nd Dedicatee, Hillary Rodham Clinton joins the esteemed company of Harry Blackmun, Barbara Jordan, William Wayne Justice, Judith Kaye and Thurgood Marshall, to name just a few. In dedicating this year's volume to Hillary Rodham Clinton, we not only note her achievements, but praise her courage and conviction. I am honored to introduce to you a woman who has composed a revolutionary life in many ways . . . as attorney, public servant, mother, policy maker, and First Lady . . . Hillary Rodham Clinton.