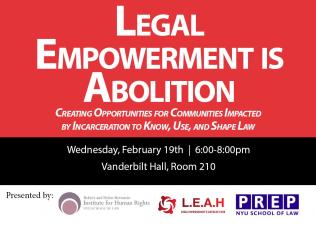 Legal Empowerment is Abolition is a panel hosted by NYU School of Law’s Bernstein Institute for Human Rights and the Legal Empowerment and Advocacy Hub (LEAH), and co-sponsored by NYU Law's Prison Reform and EducatioN Project (PREP). The panel, featuring LEAH's founder and Soros Justice fellow, Jhody Polk and other formerly incarcerated advocates and scholars, will highlight the national and international legal empowerment movement and how it connects to Jailhouse Lawyers and prison law libraries within the United States. Legal empowerment is the belief that impacted communities must lead their own struggle for justice. This panel will explore how the cycle of legal empowerment – a process of knowing, using, and shaping laws - can destroy the cycle of incarceration. Too often, the abolitionist movement relies on voices outside of the prison walls. The program will reflect on the ways incarcerated folks have obtained freedom from the inside out through the legal empowerment of the incarcerated, their families, and communities.

Open to the general public.  Light refreshments will be provided. RSVP Here.

Jhody Polk is the Founder and lead organizer of LEAH. A formerly incarcerated law clerk, Jhody won the 2018 Soros Justice Advocacy Fellowship where she launched LEAH out of the Jailhouse Lawyer’s Initiative which is hosted by the National Lawyers Guild. LEAH is the first Participatory Defense Hub in the state of Florida. Jhody Polk was the central Florida organizer on the campaign to restore voting rights to over 1.5 million Floridians with felony convictions in the state of Florida. She is the Community Justice coordinator at the River Phoenix Center for Peacebuilding and an aspiring lawyer. She hopes to be admitted into the University of Florida Levin College of Law despite her former felony convictions. She looks forward to teaching law after law school and includes law students in all of her community justice work.

Jhody teaches legal empowerment at Project YouthBuild in Gainesville, Florida and is dedicated to supporting families and individuals to identify, address, and prevent injustice that they experience in every part of their lives and not just in the criminal justice system. It is her goal to expand Justice beyond the criminal system. In addition to legal empowerment, Jhody believes in and advocates for Restorative Justice, Social Emotional Learning, Trauma informed and responsive communities, and community empowerment. Jhody is the current director of the Alachua County Reentry Coalition and dedicated member of the National Council for Incarcerated and Formerly Incarcerated Women and Girls, the League of Women Voters, NLG, Fight Toxic Prisons, and the FRRC.

As a global ambassador for higher education, he has traveled to Cuba, England, Jamaica, and South Africa in an effort to help establish prison-to-college pipeline programs and change the narrative of those formerly incarcerated while using education as the integral tool to help empower marginalized communities worldwide.

Christina co-runs the Soros Justice Fellowships in US Programs at the Open Society Foundations. During her tenure at OSF she has helped shape the fellowships to include the voices of those most directly impacted by the criminal justice system. She assisted with the creation of the Campaign for Black Male Achievement and the Neighborhood Stabilization Project; and worked on the Death Penalty and the Sentencing and Incarceration portfolios. Most recently, she helped launch the Soros Justice Youth Activist Fellowship pilot and worked closely with the Youth Exchange to bring the Ladders to Leaders Program (which provides temporary staffing opportunities for young people from underserved communities of New York City) to the foundation. She also worked with Herb Sturz, at the closing of Rikers Campaign. Before coming to OSF, Christina served a four-year sentence in Bedford Hills Correctional Facility. While incarcerated Christina developed or facilitated several in-prison programs, including the Foster Care and Child Custody Legal Clinic and Mothers in Touch. Post release, she worked with the Brenan Center and the Correctional Association of New York, to repeal the Adoption and Safe Families Act Law, a law which almost took her only child away. In 2017 was invited to speak at the White House on the issues of children of incarcerated parents.

For her work on behalf of incarcerated women and their children Christina has received a number of awards and honors:  the Powerful Image Award, the Family Unity Award, and the Rev. Dr. Constance M. Baugh Ex-prisoner Achievement Award.  She is also the recipient of the Rowley Medal and the Charlotte Klein Fellowship, and is an inductee into the Omicron Delta Kappa Society. She holds a BA from Marymount Manhattan College, a MA from Queens College, and has completed all her work toward her PhD at the City University of New York.

At 19 Richard Midkiff thought his life was over. Arrested for felony murder in Florida and sentenced to 38 years in prison for what seemed like an eternity. Richard contemplated giving up. Instead he decided to turn his life around and began studying and self teaching himself topics such as law, investing and personal development. In 2007, Richard took a job in the prison law library where he was certified as a law clerk eventually becoming the senior law clerk. In addition to working in the law library, Richard initiated several positive programs in the Florida prison system; a few of these positive programs are "Story Time Dads" a book reading program where fathers are recorded reading to their kids, "SAGE Personal Development Program," providing the tools to inmates to be successful both in and out of prison. the Career Resource Center helping fellow inmates get assistance upon release. On July 21, 2019, Richard was released from the Florida Department of Corrections 10 years early through a postconvicition motion he prepared. Since his release, he has continued to work in the legal field as the senior paralegal at Prisoner Connections LLC, a paralegal support group and is current president of LEAH (Legal Empowerment Advocacy Hub). His goal is to continue empowering fellow inmates still inside, newly released inmates transitioning back to society and at risk youth in an effort to prevent them from having to experience the insides of a prison cell as he did.

Immigration, Equal Protection, and the Promise of Racial Justice: The Legacy of Jean v. Nelson

Open to the general public.

The NAACP Legal Defense and Educational Fund and the Center on Race, Inequality, and the Law at NYU Law are pleased to present a legal conference exploring the intersection of immigration and racial justice. The year 2020 marks the 35th Anniversary of Justice Thurgood Marshall's groundbreaking dissent in Jean v. Nelson, wherein Justice Marshall called for equal protection to apply to Haitian immigrants, and to prohibit the government from discriminating on the basis of race or national origin. The conference begins with a discussion of Jean and the struggle to secure racial justice for Haitian asylum seekers in the 1980s. The conference will then explore subsequent efforts by advocates, academics, policymakers, and activists to vindicate the promise of equal protection for immigrants of color in the United States and internationally.