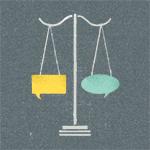 “The unexplained gender wage gap is actually bigger in professional occupations and for high-skilled types of professions,” said Albanesi. The educational investments that men and women in high-level occupations make are similar, she said, adding, “You really wonder whether the fact that we see large gaps…may be exclusively due to discrimination.”

The EEOC wields two pay discrimination laws, Lipnic explained: the Equal Pay Act and Title VII of the Civil Rights Act. She noted, however, that the majority of the EEOC’s cases are enforced under Title VII. Last year, she said, of the 89,000 charges of discrimination filed with the EEOC, only one percent were under the Equal Pay Act—and only seven percent of those were actually litigated.

The persistence of the wage gap due to gender discrimination is also related in part to the difficulty of identifying it. “Pay discrimination is hard to fight because it’s often really hard to know when you’re a victim of it,” Martin said. In addition to strengthening the remedies available under the Equal Pay Act to compel employers to self-audit, Martin advocated for greater pay transparency and more public reporting of pay data.

In its February 11 symposium, “Legal Solutions to Wealth Inequality,” BALSA spotlighted tax policy and banking reform. The day’s first panel, moderated by Associate Professor of Law David Kamin ’09, offered a range of fixes to systemic problems, some easier to accomplish than others.

The panel included Professor of Law and Public Policy Lily Batchelder, former majority chief tax counsel for the US Senate Finance Committee in the Obama administration; Professor Dorothy Brown LLM ’84 of Emory University School of Law; and Wjociech Kopczuk, professor of economics and international and public affairs at Columbia University.

Batchelder stressed that while both wealth and income inequality have been growing for decades, wealth inequality is greater. “The top one percent currently owns about 35 percent of all wealth,” she said, “while the bottom 40 percent of the distribution essentially owns nothing—generally, has negative wealth because of debt.” She described a cycle, virtuous for some and vicious for others, in which those with higher incomes have better options and incentives to save, increasing their wealth. Those with lower incomes don’t have those same opportunities, and so fail to see their wealth grow.

Kopczuck, however, held that wealth inequality is a more “nuanced” problem, harder to quantify and with less clear-cut consequences. Kopczuck focused on income inequality, which he said was driven more by tax policy than by technological change. “That takes time to flow through the economy, and we are basically in a very long transition process.”

Brown spoke to the misinformation driving the racial wealth gap. Citing research by Professor Thomas Shapiro on the factors that explain 66 percent of wealth, including years of homeownership and a college education, she emphasized that whites receive a greater pay-off when they pursue these traditional markers of success than do blacks. In fact, she suggested, African Americans—who often prefer living in minority neighborhoods, which tend to have cheaper housing and lower appreciation—can actually be hurt by homeownership.

“You tell yourself, you get a good college education, you get married, you buy a home, you’re all set,” she said. “Actually, what this study shows is if you’re black and do all those things, you’re in deep trouble.” She added, “Implicit in the things that are creating the racial wealth gap are tax policies that benefit the assets driving the racial wealth gap.” These also include inheritance and earnings.

The panelists suggested some reforms, including implementing a higher estate tax and creating easier ways to save. Brown also revisited her 2013 proposal to publicize the tax returns of members of Congress in an annual 535 Report. This would illuminate how tax policy benefits not only the wealthy but also lawmakers, she said, perhaps spurring the public to demand reform. She recognized her idea would get slim support.

“I did get a call from the Sanders campaign,” she quipped. “When they pitched it to him, even he thought it was crazy.”

“If You’re Not Saving for Retirement or a Rainy Day, Then myRA Should Be yourRA” by Lily Batchelder and Jared Bernstein
Huffington Post, 11/5/15

“A Hierarchy of Equalities: Gráinne de Búrca examines how the European Court of Justice is dealing with anti-discrimination laws”
NYU Law website, 9/4/15

“It’s Time We Learned What Members of Congress Pay in Taxes” by Dorothy Brown
Forbes, 4/17/13