Finding love at the Law School

In class sections and study groups, in student organizations and happy hours, even in the line to get their ID photos made, these alumni struck up a conversation with a classmate, and something clicked. We asked them to tell their stories here. Happy Valentine’s Day, NYU Law!

Angela and Mitchell first met at the start of law school when Mitchell invited Angela to a Root-Tilden-Kern happy hour at Amity Hall. Both students also quickly became active in Black Allied Law Students Association (BALSA). “Every year BALSA goes on a retreat to upstate New York at the beginning of the school year,” says Mitchell. “During our 1L BALSA retreat, we not only had a great time getting to know our classmates, but also had great conversations that were the start to our relationship.” The pair began dating in November 2014.

On March 7, 2020, Mitchell proposed to Angela in front of Washington Square Arch. He’d told her to dress up for a fancy brunch, but she was instead greeted by a proposal and 30 friends—many from NYU Law—cheering her. She said yes.

Today Angela is a staff attorney at the Advancement Project National Office, a civil rights organization focused on racial justice, and Mitchell serves as counsel to the Voting Rights Program for the Southern Coalition for Social Justice. The pair married last August in Angela’s hometown, Cleveland. “Many of our NYU Law friends and mentors were either in the wedding, at the wedding, or joining us through virtual livestream,” Mitchell says. 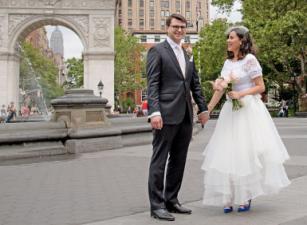 Citlalli and Stephen first met in line to have their photos taken for the LLM program. Stephen was studying Tax, and Citlalli had come from Mexico for the International Legal Studies program. Later that week, they bumped into each other at a mixer at the Delancey, a bar on the Lower East Side. Stephen showed his new headshot to Citlalli, who immediately exclaimed what a terrible photo it was. “I have no idea why I said that,” she laughs. Stephen liked her confidence and sense of humor, and asked for her phone number at the end of the night.

They began dating that fall. “Bumping into each other going to classes between Furman Hall and Vanderbilt Hall was just very nice. It made a huge place feel small,” Citlalli says. “Eating lunch together in Washington Square Park was one of my favorite things to do,” Stephen adds. And the park is where he asked her to marry him a few years later.

The couple now lives in Brooklyn with their dog, Frida. Citlalli is a senior legal analyst at the United Nations Office for Project Services, while Stephen is senior director, tax at Tishman Speyer. 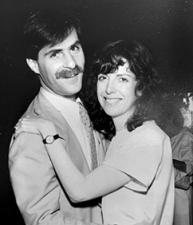 Long Island natives David and Wendy met early in their first year at the Law School, when a classmate invited their section out for drinks at a West Village bar. David walked Wendy home, and the pair became fast friends, but didn’t start dating for nearly a year and a half. They got engaged on a weekend trip during the fall of their 3L year, when David proposed—for the third time, he adds–by a picturesque lake on Smith College’s campus in Northampton, and they married several weeks before graduation.

A litigator, David became chairman of Goodwin Procter in 2014; he is now of counsel and chairman emeritus. After earning her LLM at NYU Law in 1980, Wendy worked in the legal department of publisher Random House, and later pivoted to a business role in the company’s children’s publishing group. Their daughter Alison graduated from NYU Law in 2010. The couple is among the co-chairs of the NYU Law Reunion Committee 2022.

Their favorite moment together in law school? “Probably in corporations class, talking and laughing with each other and being shushed by classmates behind us,” says Wendy. “It all worked out—we’re still laughing today!” 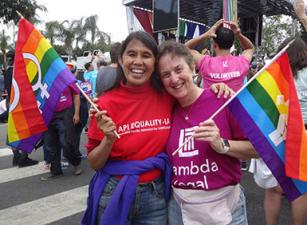 Jenny and Doreena first encountered each other in line for student ID photos, then again on the first day of classes. “We both recognized a kindred spirit—a likely friend—in the other fairly quickly,” recalls Jenny. “We both introduced ourselves to the class by talking about the feminist movement work we each had been doing.” They joined the Lesbian and Gay Law Students group (now called OUTLaw), and found a sense of community there.

Six weeks into the semester, Jenny and Doreena started dating. Two weeks later, they moved in together. “New York real estate was then what it still is—challenging,” says Doreena. “Jenny’s flat mate became difficult, and I still needed a roommate. So, we took the crazy leap of Jenny moving in really quickly. We joked at the time that, but for my involvement with the Asian-Pacific American Law Students Association (APALSA), we would have been together 24/7.”

Constitutional Law with David Richards was a favorite course in law school, Jenny and Doreena say. Calling Richards’ scholarship “an influential gift to the global LGBTIQ movement,” Jenny says that “having him as a professor as 1Ls in 1985—as AIDS was causing persecution of gay people to spike dangerously—validated our professional possibilities as well as grounded us in that core area of law.”

They married in 2008, after the California Supreme Court invalidated the state’s ban on same-sex marriage in litigation in which Jenny was co-counsel. Today Jenny is senior counsel and director of strategic initiatives at Lambda Legal, and Doreena serves as policy director at Asian Resources, Inc. Last month, OUTLaw honored Jenny as the group’s Alumna of the Year.