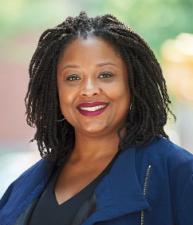 The Center on Race, Inequality, and the Law at NYU School of Law is proud to announce that Dean Trevor Morrison has appointed Deborah N. Archer, associate professor of clinical law and director of the Civil Rights Clinic at NYU Law, co-faculty director of the Center, effective February 1, 2019. “Deborah’s breadth of experience, intelligence, and demonstrated commitment to racial justice and equality make her a perfect fit for this role,” said Professor Anthony Thompson, the Center’s founding faculty director. “I look forward to her contributions to the Center’s continued success.”

Archer joined the NYU Law faculty in 2018, following a distinguished career as a professor of law at New York Law School (NYLS). While at NYLS, Professor Archer served as the school’s inaugural dean of diversity and inclusion and as associate dean for academic affairs and student engagement. She also led NYLS’s Racial Justice Project, a legal advocacy initiative that worked to advance racial justice and civil rights. Archer serves on the boards of the Legal Aid Society and the American Civil Liberties Union (ACLU); she is a member of the ACLU’s executive committee and serves as general counsel to its board. For many years, she also served on the New York City Civilian Complaint Review Board and the board of the New York Civil Liberties Union.  In recognition of her work, the New York Law Journal named her one of its 2016 Top Women in Law. Before beginning her career in law teaching, Archer was assistant counsel at the NAACP Legal Defense and Educational Fund, an associate at Simpson Thacher & Bartlett, and a Marvin M. Karpatkin Fellow at the ACLU.