The BWLN builds on NYU Law’s long history at the forefront of women’s entry into the law. With the 1892 graduation of Rose Levere, Agnes Mulligan, and Julia Wilson, NYU School of Law embarked on a proud tradition of training extraordinary female lawyers, decades earlier than many of its peer institutions. As Phyllis Eckhaus ’85 reported in her 1991 NYU Law Review article, “Restless Women: The Pioneering Alumnae of New York University School of Law” (PDF: 1 MB), NYU Law had graduated more than 300 women by 1920—the year when the Nineteenth Amendment was ratified, granting all American women the right to vote. In 1922, Anna Jones Robinson and Enid Foderingham Thorpe were the first black women to graduate from the Law School; Robinson became the first woman of color to be admitted to the bar in New York, in 1923. This historical commitment to gender equity in the law has seeded the profession with NYU Law-educated women attorneys and has empowered our graduates to shatter glass ceilings.

Indeed, there has been great progress in women’s representation in the law in recent decades. In 1966, according to American Bar Association data (PDF: 444 KB) tracking law school enrollment by gender, women made up only 4.4 percent of entering JD classes nationwide. At NYU Law, which by then had been graduating women for more than 70 years, the number of first-year women law students was 9.97 percent. 2016 marked the first year that women made up more than half of law students enrolled at accredited law schools across the United States, per The New York Times. Women comprise 52 percent of NYU Law’s fall 2018 entering class, making the Law School a leader in this area among the country’s top law schools.

Yet within the legal profession, and at law firms in particular, the numbers tell a different story.  In their “Women in law firms” report published in October 2017, McKinsey found that while white women comprise between 31 and 36 percent of cross-level associates, they represent only 16 percent of equity partners. Representation is even weaker for women of color, who comprise only 10 to 16 percent of associates and 3 percent of equity partners. At post-associate levels, the report notes, women of color become the least represented group, behind white men, white women, and men of color. While firms are working to increase their minority representation, the composition of management committees and boards suggests there is significant progress to be made, according to the New York City Bar’s Diversity Benchmarking Report (PDF: 1.54 MB).

There also remains work to do to ensure that NYU Law remains a leader in women’s legal education and in women’s leadership in the field of law. The Birnbaum Women’s Leadership Network (BWLN) was conceived in 2017 by Sheila Birnbaum ’65 and Jeannie Forrest in part to meet this need.

From the NYU Law magazine 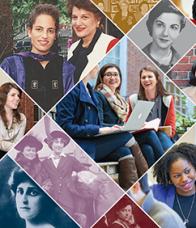 The women of NYU Law have been making history since 1892. Facing modern challenges for women in the legal profession, they won’t stop now.