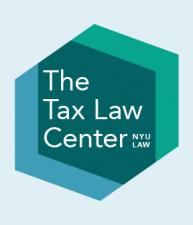 The newly formed Tax Law Center at NYU Law will focus on tax law issues that have profound implications for the government, businesses, and individuals. The center will be hosted by NYU Law, whose pioneering Graduate Tax Program has long recognized how tax-related issues affect all aspects of society.

The Tax Law Center will seek to protect and strengthen the nation’s tax system through rigorous, high-impact legal work in the public interest. The new center’s work will include offering technical input on tax legislation, submitting comments on tax regulations, and intervening in tax litigation, with the goals of protecting and improving the integrity of the tax system, saving and raising revenues, and advancing equity.

The center’s founding faculty directors, Robert C. Kopple Family Professor of Taxation Lily Batchelder and Professor David Kamin ’09 (currently on public service leave), each bring estimable credentials from their work in tax policy. So does Chye-Ching Huang, the center’s founding executive director, who spent a decade at the Center on Budget and Policy Priorities, a think tank in Washington, DC, focused on the impact of federal tax, fiscal, and economic policies. All three have testified before Congress on tax law and policy issues.

During the administration of President Barack Obama, Batchelder served as majority chief tax counsel for the US Senate Committee on Finance, and later as deputy director of the White House National Economic Council and deputy assistant to the president. Before joining the NYU Law faculty, she was a tax associate at Skadden, Arps, Slate, Meagher & Flom. Batchelder focuses her scholarship and teaching on personal income taxes, business tax reform, wealth transfer taxes, retirement savings policy, and social insurance.

“Tax is one of the most heavily lobbied areas of the law, overwhelmingly by private interests,” says Batchelder. “The Tax Law Center will aim to provide a partial counterweight to this tilt through a public interest voice that has a broad and long-term view of sound tax policy, and is grounded in technical legal expertise. We are extraordinarily lucky to have Chye-Ching Huang—a nationally recognized leader on tax law and policy, including its racial equity implications—leading this effort.”

Huang, whose most recent role at the Center on Budget and Policy Priorities was senior director of economic policy, was previously a senior lecturer in law at the University of Auckland in New Zealand, where she taught and researched in tax law, policy, and regulation. She also practiced tax at the firm of Chapman Tripp in New Zealand.

“How to Tax the Rich: Plenty of people call for increasing taxes on the wealthy. David Kamin looks at how to do it effectively.”
NYU Law website, 4/14/16