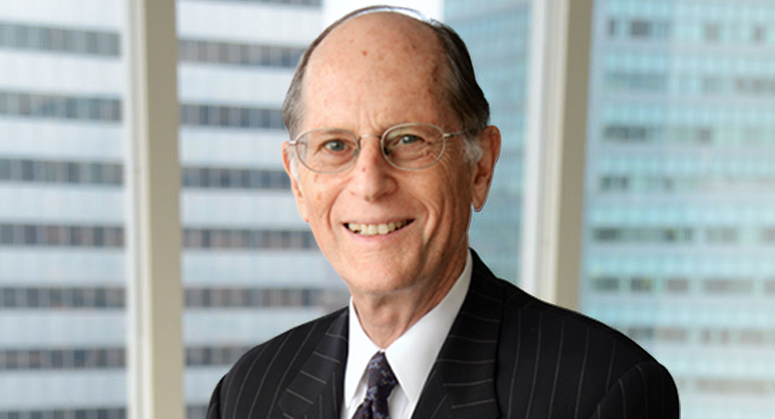 A major gift from Zimroth, a former NYU Law professor and longtime litigation partner at Arnold & Porter, ensures the future of the renamed Peter L. Zimroth Center on the Administration of Criminal Law.

In 2013, Judge Shira Scheindlin of the US District Court for the Southern District of New York asked Peter Zimroth to be the federal monitor overseeing the enforcement of Scheindlin’s landmark ruling that the New York City Police Department (NYPD) policy of stopping and frisking citizens was racially discriminatory and must be altered. Zimroth accepted the controversial post without hesitation. “I wasn’t daunted. I was excited,” he says. “Someone has to do it, right?” As a former prosecutor, former New York City corporation counsel, and longtime litigation partner at Arnold & Porter, Zimroth brought to the task a strong, informed interest in the justice system and law enforcement—the same commitment that also underlies his ties to NYU Law.

Zimroth recently designated a major gift to NYU Law’s Center on the Administration of Criminal Law, renamed the Peter L. Zimroth Center on the Administration of Criminal Law. He has partnered with the Law School to secure additional funds to guarantee the center’s longevity. It is the latest major chapter in Zimroth’s long-running relationship with the Law School, which began decades ago when he was a full-time professor teaching courses on the federal courts, criminal law, and criminal procedure. Zimroth returned to NYU Law in 2014 as the inaugural director of its Center on Civil Justice (CCJ).

“We were looking for somebody to be a director who could both immediately raise the stature of our undertaking and also drive it forward…. Peter has played the role of the reassuring core of the center to perfection,” says Samuel Issacharoff, Bonnie and Richard Reiss Professor of Constitutional Law and a faculty co-director of the center.

“Peter Zimroth has always been an outstanding trial lawyer as well as an effective public servant,” says NYU Law Trustee Sheila Birnbaum ’65, chair of the center’s board of advisors, who first met Zimroth when he defended pharmaceutical company Wyeth against claims related to diet drug fen-phen. “He is smart and creative.”

The center has become a leading voice in the push to improve the civil litigation system. Apart from hosting dozens of public events on civil justice issues, CCJ has initiated projects to make data from aggregate litigation cases publicly available and to ensure the effective and ethical integration of artificial intelligence into the legal system; it also has launched an online library related to third-party litigation funding. In the near future, Zimroth will step down as director of CCJ, remaining at NYU Law as a distinguished scholar in residence.

More recently, Zimroth has broadened his focus to include the Center on the Administration of Criminal Law, established in 2008 to promote good government practices in criminal matters, with particular attention to prosecutorial power and discretion. Zimroth deems criminal law an ongoing focal point for achieving racial justice, and applauds the way in which the center has expanded its scope over time to encompass state and local actors in addition to those at the federal level.

Zimroth’s legal career began with clerkships for Chief Judge David Bazelon of the US Court of Appeals for the District of Columbia Circuit and US Supreme Court Justice Abe Fortas. Zimroth next worked as an assistant US attorney under the legendary Robert Morgenthau, then the US attorney for the Southern District of New York. He joined the full-time NYU Law faculty in 1970. In 1975, Zimroth went to work again for Morgenthau, at that point the Manhattan district attorney, and rose to become chief assistant district attorney.

In 1987 Mayor Ed Koch ’48 appointed him as corporation counsel, New York City’s top lawyer. His proudest accomplishments while corporation counsel, he says, include drafting New York City’s campaign finance law and filing an amicus brief whose argument was adopted by the New York State Court of Appeals in a landmark opinion that recognized two gay men living together as a family. In 1990, Zimroth became a partner at Arnold & Porter, focusing on commercial litigation and white-collar criminal defense. He retired in 2015 from the firm to focus on his stop-and-frisk monitorship.

Vice Dean and Charles Seligson Professor of Law Rachel Barkow, faculty director of the newly renamed Zimroth Center on the Administration of Criminal Law, notes that Zimroth’s gift will provide a firm footing for ongoing and future initiatives. “We’re just as happy to have Peter himself as a resource,” she adds. “He’s had a career of criminal justice reform successes.” In honor of those successes, the Law School is welcoming additional gifts from anyone who shares Zimroth’s interest in the center’s work.