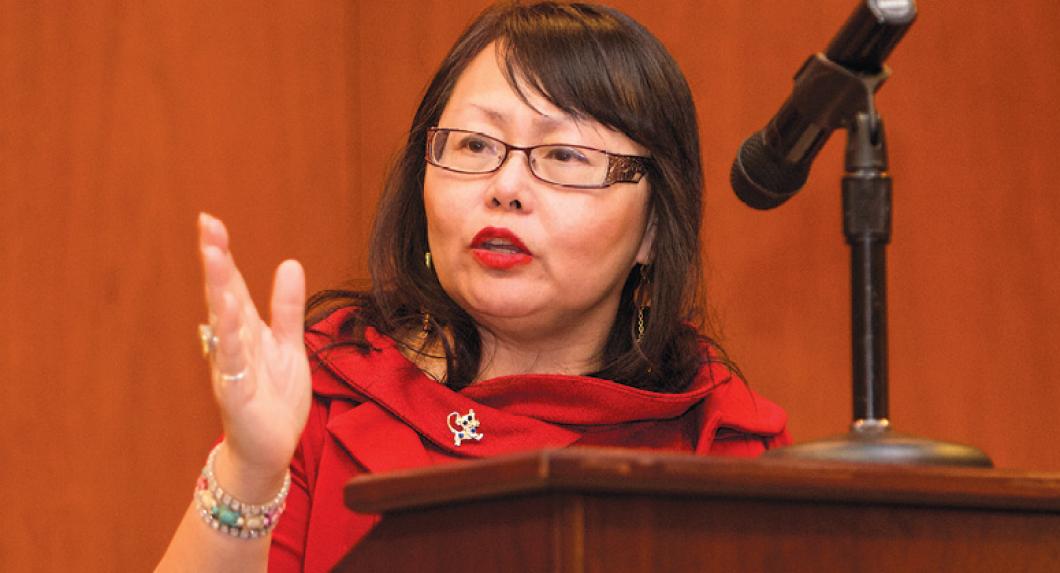 The Women of Color Collective honors Judge Doris Ling-Cohan ’79 with its 2016 award.

Not every judge brings her interns to karaoke as an educational experience. But for Monica Cheng, former intern to Judge Doris Ling-Cohan ’79 of the New York State Supreme Court, one such karaoke trip became a formative lesson: She remembers the judge telling her that if she could get over her fear and stand up to sing in front of a group of strangers, she would be able to be a fearless lawyer, too. Ling-Cohan, New York’s first Asian-American woman to serve as an appellate judge, takes her work as a mentor as seriously as her docket. In recognition of her leadership and lifetime of work in public service, Ling-Cohan was the recipient of the 2016 Woman of Distinction Award from the Women of Color Collective (WoCC).

Growing up, Ling-Cohan did not imagine that one day she would be a leader, or even a lawyer. “As a child, I didn’t dare to dream. Reality simply stifled my dreams,” Ling-Cohan recalled in her speech at the WoCC ceremony. “Like many of my generation, growing up in Manhattan’s Chinatown, my parents were immigrants. My father worked in a laundry, and my mother was a seamstress. As a child, I too worked in a sewing factory sewing and cutting thread.”

Ling-Cohan entered law school hoping that her law degree could be a tool for social change, both for her own community and other disadvantaged groups. Although WoCC did not yet exist, as a member of the Asian-Pacific American Law Students Association (APALSA), “she helped look out for the newbies, especially at a time when we were a small minority at the Law School,” says Sharon Hom ’81, executive director of Human Rights in China.

As a young lawyer, Ling-Cohan worked for several New York Legal Services agencies. She also became active within the Asian-American legal community, helping to found first the Asian-American Bar Association of New York, then the New York Asian Women’s Center (NYAWC), an organization that provides support and legal assistance for victims of domestic violence and other forms of abuse.

In the early days of NYAWC, she and the other founders often opened their own homes to women in need. “Late one night, my husband and I drove to a hospital in Chinatown and picked up a woman and her child, to give them a safe place to stay.” Ling-Cohan says. “I saw the woman a few years later, and she seemed to be doing well.”

Conscious of the lack of representation of Asian-Americans within the judiciary, when Ling-Cohan saw a vacancy in New York City’s Civil Court, she decided to run for the position. She was elected to that court in 1995 and served until 2002, when she was elected to the New York State Supreme Court.

“She’s very interested in people, and understands people’s problems,” says Torrey Whitman, executive director of NYU Law’s Institute of Judicial Administration. “When she was a trial judge, that was especially important, but even now on the appellate court, she can still bring her knowledge of real-world New York and her sympathy for the issues people face to bear on her judging.”

One of Ling-Cohan’s most high-profile decisions was in the 2005 case Hernandez v. Robles, in which she ruled in favor of the right of same-sex couples to marry. When her decision was reversed by the New York Court of Appeals, Ling-Cohan says, “I felt a personal loss. I realized what it meant to the individuals involved in the case, and to anybody who was gay or lesbian and really wanted to marry their partner.”

On the first day on which the New York State Legislature permitted same-sex marriage, Ling-Cohan volunteered and performed 24 weddings, including the marriages of several of the original plaintiffs in Hernandez v. Robles. Although at the time of her decision Ling-Cohan faced criticism from both lawmakers and the press, and death threats, she felt vindicated for standing by her convictions when nearly a decade later the Supreme Court’s marriage equality decision in Obergefell came down—a lesson she imparted to current law students in her WoCC speech. “Do not fear criticism. Do the right thing,” she said. “And most importantly, push the envelope by dreaming on a grand scale for your community.”