A conversation about Charlottesville 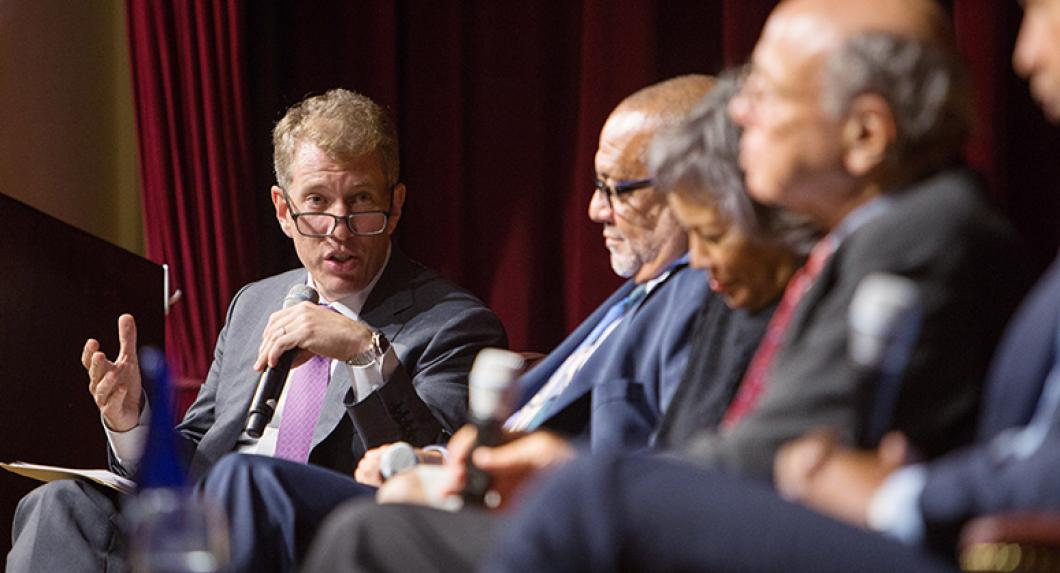 In August, following an open display of racial hatred and violence in Charlottesville, Virginia, Dean Trevor Morrison issued a statement strongly condemning those views and noting, “Our community and our country must wrestle with how to understand and respond to the events themselves and the way President Trump has characterized them.” On September 11, Morrison moderated a conversation on the subject with a panel of four Law School faculty members—Professors Burt Neuborne, Bryan Stevenson, Kim Taylor-Thompson, and Anthony Thompson. The Law School’s Center on Race, Inequality, and the Law, of which Thompson is the faculty director, co-sponsored the event.

An audience composed of students, alumni, faculty, and administrators filled Tishman Auditorium to hear the discussion. (A video of the discussion is below.) “It was important to have an event on campus that acknowledged the recent growth of white supremacy in the United States and also give context to it,” said Elizabeth Caldwell ’18.

The panelists addressed a variety of issues raised by Morrison, but underlying many of their observations was a common theme: This country’s failure to confront what Stevenson calls the “narrative of racial difference” that whites have used to marginalize and brutalize African Americans (and others) from the time of slavery to the present day.

“I think Charlottesville was the symptom of a larger disease,” said Stevenson, “and the disease is that we are burdened in this country by a history of racial inequality.” That history “has created a kind of smog that we all breathe in that creates conflict and tension, and we have moments where that tension is made dramatic as it was in Charlottesville, but it’s always there.” As Taylor-Thompson put it: “What Charlottesville did is it just took a band-aid off what is the festering sore of racism in this country.”

Other topics discussed included the role played by police (and how much that can vary in white and black communities), First Amendment considerations for hate speech, and how best to deal with Confederate monuments.

For Neesha Chhina ’18, the discussion was well worth having. “It is imperative that the Law School engages in meaningful conversations to discuss race and inequality,” she said. “While Charlottesville provides a lens through which we can examine issues of racial subjugation and white supremacy, it is by no means a beginning nor end of the conversation.”

And to effect real change, Stevenson implored, today’s law students have to do more than talk. “You have to get involved,” he said. “You cannot in my judgment prepare yourself to create a different conversation 50 years from now if you stay in your classrooms, if you talk only to yourselves, if you allow yourself because you are in law school to be disengaged from this larger struggle. We need you to be involved in the broader struggle.”

“A message from Dean Trevor Morrison to the Law School Community on recent events in Charlottesville”
NYU Law website, 8/17/17