Discussions That Probe the Roots of Racism 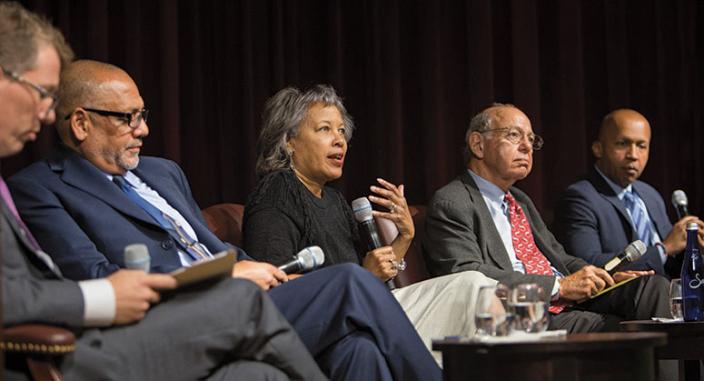 In the past year, NYU Law’s Center on Race, Inequality, and the Law (CRIL) facilitated a series of hard-hitting dialogues. In September 2017, a month after an open display of racial hatred and violence in Charlottesville, Virginia, Dean Trevor Morrison moderated a conversation on the subject with a panel of four Law School faculty members: Professors Burt Neuborne, Bryan Stevenson, Kim Taylor-Thompson, and Anthony Thompson, CRIL’s faculty director.

An audience composed of students, alumni, faculty, and administrators filled Tishman Auditorium to hear the discussion. The panelists addressed a variety of issues raised by Morrison, but underlying many of their observations was a common theme: the failure of the United States to confront what Stevenson calls the “narrative of racial difference.”

“I think Charlottesville was the symptom of a larger disease,” said Stevenson, “and the disease is that we are burdened in this country by a history of racial inequality.” As Taylor-Thompson put it: “What Charlottesville did is it just took a Band-Aid off what is the festering sore of racism in this country.”

For Neesha Chhina ’18, the discussion was well worth having. “It is imperative that the Law School engages in meaningful conversations to discuss race and inequality,” she said. “While Charlottesville provides a lens through which we can examine issues of racial subjugation and white supremacy, it is by no means a beginning nor end of the conversation.”

In February, a CRIL-sponsored panel discussed what current research in psychology and neurology reveals about the roots of racism and how those insights can help address racial inequality in the US legal system. The conversation included Yale University psychology professors Jennifer Richeson and B.J. Casey, and Taylor-Thompson—all members of the MacArthur Foundation Research Network on Law and Neuroscience.

Taylor-Thompson emphasized the importance of interdisciplinary discussion when examining racial inequality and suggested that such an approach is rarer in the law than in other fields. “We are afraid of what [cognitive science and social psychology] might reveal,” she said. “And we often don’t want to see, as a legal system, the kinds of patterns that often develop and the kinds of choices that we make and the disparities that result from those choices.”

Recent census data has revealed a “majority-minority shift” in racial demographics, which suggests that the US is trending toward a nonwhite racial majority. A fearful reaction among those who benefit from the status quo has helped drive increased efforts to reduce immigration, Richeson said, while fear of minorities has also contributed to the mass incarceration of minority offenders and the shooting of unarmed black adolescents by law enforcement.

Casey, whose research on adolescent brain development was cited by the US Supreme Court in decisions ending the juvenile death penalty and life imprisonment without parole for juveniles, suggested that such shootings can result from the way law enforcement officials respond to black children or interpret their reactions.

“There are perceptual studies in which even just pigmentation of the skin can lead us to label individuals as more threatening or associated with more criminal behavior, and so a lot of this bias is driving who we target in terms of who we arrest,” Casey said. Meanwhile, awareness that they are being targeted by police increases stress for the youths likely to be targeted and can cause them to respond by fighting or fleeing.

“It’s not enough to have a win in the courtroom or get a judge to see something differently,” said Taylor-Thompson. “We really have to start saying, ‘How are we changing the public conversation about this?’”

"The Center on Race, Inequality and the Law observes its first anniversary with a discussion of racial narratives in America"
NYU Law website, 6/20/18