The curtain rises on a more inclusive Broadway, with some help from the Center for Diversity, Inclusion, and Belonging 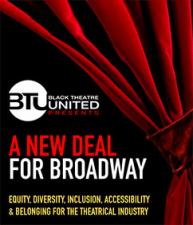 “The Broadway that opens in September 2021 will not be the same Broadway that closed in March 2020.” With this line, in the newly published document “A New Deal for Broadway,” a coalition of Broadway’s theater owners, producers, creatives, and unions declared an end to status quo operations that have excluded or devalued Black people in the New York City theater industry.

In an effort initiated by Black Theatre United (BTU)—an organization composed of members of the Black theater community that advocates for Black professionals in the arts—stakeholders from across the industry convened in summit meetings from March 2021 to August 2021 to discuss new industry-wide standards and reforms around equity, diversity, inclusion, accessibility, and belonging (EDIAB), with a focus on Black individuals in theater.

Kenji Yoshino, the director of NYU Law’s Center for Diversity, Inclusion, and Belonging (CDIB), facilitated the meetings, working closely with BTU and David Glasgow, CDIB’s executive director, to frame and publish the industry’s new standards. Their efforts culminated in the August 23 publication of the 18-page document, drafted by Glasgow, that outlines short-term and long-term reforms to address overt and covert discrimination that harms Black professionals’ lives and careers.

“A New Deal” commits its more than 100 individual and organizational signatories—including Actors’ Equity Association, the Disney Theatrical Group, and The Shubert Organization—to treating EDIAB with the “same seriousness as issues of workplace safety, discrimination, sexual harassment, and bullying.” Among the reforms, directors and authors who signed the document agreed to “never assemble an all-white creative team on a production again, regardless of the subject matter of the show” while producers agreed to “ensure true racial diversity on all future productions (including creative teams, management, cast, crew, and staff).” Additional commitments include the removal of biased or stereotypical language in casting calls and the use of racial sensitivity coaches to help cast and crew members navigate scenes with heightened racial dynamics, such as the use of slurs in a production.

While this document is not legally binding, it emphasizes the need for systems of accountability through continued meetings from 2021 to 2024, and possible removal of signatories who fail to meet their commitments.

We spoke with Glasgow and Schele Williams, a stage director and a founding member of BTU, about the process of creating “A New Deal for Broadway” and its intended impact on the theater industry and beyond.

What led Black Theatre United to hold a summit bringing industry leaders together?

Williams: The founders of BTU knew that the foundational work on equity, diversity, inclusion, accessibility, and belonging for Black artists needed to be industry-wide to be effective. We also knew that this was the moment to do it. After the deaths of George Floyd and Breonna Taylor, there was no going back to the Broadway we left in March 2020. We wanted to see real acknowledgment of systemic inequity accompanied by full-throated commitments and accountability.

What were the primary factors that allowed this effort to be successful?

Williams: Preparation. We partnered with the Center for Diversity, Inclusion, and Belonging at NYU Law as soon as we decided to have a summit. We strategically thought about what we wanted to accomplish, but more importantly, we thought about all the Black people of every age in every area of the business. We thought about the generations that came before us—those whose shoulders we stand on—and the generation that will follow us. We were also unafraid to have uncomfortable conversations with our colleagues, especially when it was time to sign the document.

Glasgow: First and foremost, I would point to the strategic approach that BTU took to the initiative. They knew the major players in the industry who would need to be in the room to achieve real change in a short time frame, and they thought carefully about what topics needed to be discussed in each session to keep everyone on track. Another important factor was that the participants came into the summit wanting to make concrete change. They knew this couldn’t just be a listening tour. Everyone had the goal of walking out of this process with a document they could feel proud of, and BTU held their feet to the fire to make it happen.

What long-term impact do you hope the New Deal has on the industry?

Williams: Our Broadway Commercial Summit was intended to be three years of strategic work. “The New Deal” is the first necessary step on the journey. We hope that the reforms in the document will outlive us. We also hope that the reforms will strengthen over time as we remain in conversation as an industry. Our goal is to have a truly diverse workforce, and a culture where every person can bring their authentic self into every space and be valued for their contributions. When that happens, the art we make will be better.

What were the biggest challenges in getting so many different stakeholders to agree to concrete, structural reforms?

Williams: The biggest challenge for us was that these reforms are deeply personal. The commitments in the New Deal affect our lives. Another challenge was confronting the interpersonal issues that have prevented some groups from working together in the past. There were many reminders that we are here because of the real harm suffered by Black artists in our theater community. Thankfully, Professor Kenji Yoshino, our facilitator, was unyielding to ensure that the New Deal was a document with teeth. As we got closer to the signing deadline, David [Glasgow] had many closing conversations to give everyone who wanted to sign every opportunity to do so.

Glasgow: From my standpoint as the drafter of the document, it was difficult to get stakeholders to align on the language, since all of them were bringing different concerns to the table. Some participants argued that certain provisions were too weak; others argued that the same provisions were too strong. We also encountered some pushback from lawyers who reviewed the draft language on behalf of certain participants. It was helpful that Kenji [Yoshino] and I are lawyers ourselves. We could say confidently when we felt that people were interpreting the language too legalistically.

How can this document influence other industries and workplaces looking to create more diverse and inclusive climates?

Glasgow: I hope this whole process will serve as a model for other industries and workplaces: get stakeholders into a room together, have a focused agenda, and insist on public written commitments to create accountability. The theatrical industry is incredibly diffuse; people come together for individual productions and then disperse. If it’s possible to bring stakeholders into a room to hash out industry-wide reforms in that context, then it’s possible to do it in other industries as well.