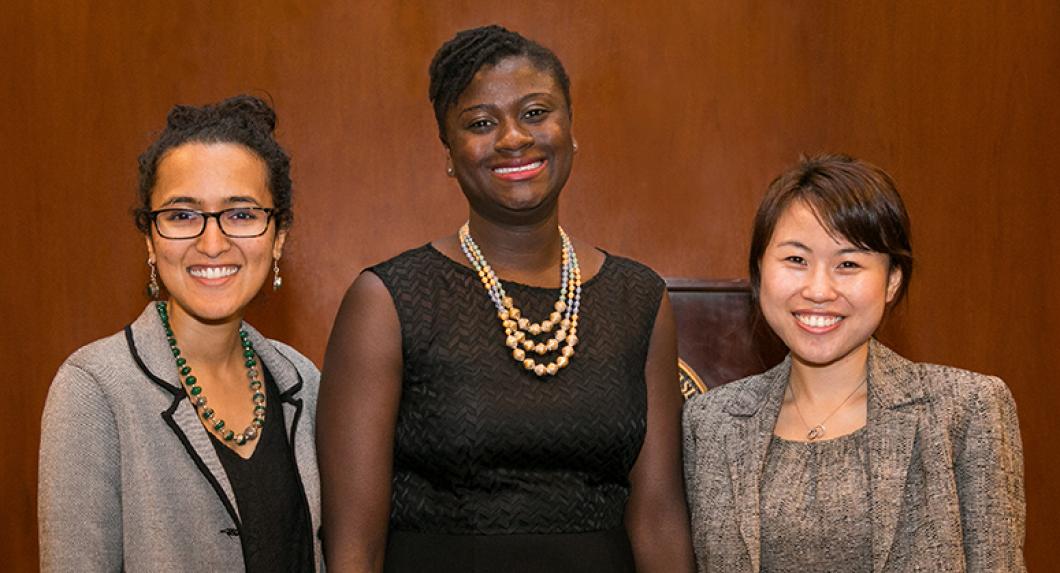 The Women of Color Collective (WoCC) was one of the primary reasons Samah McGona ’18 chose to attend NYU Law. “I was a women’s studies minor in undergrad, and I’ve always been really interested in spaces created to foster collaboration between women,” McGona says. “When I came here for Admitted Students Days, one of the first students I met was part of WoCC, and when she started talking about it, I knew I wanted to be part of it.” Now, McGona is WoCC co-chair along with Alice Thai ’18. Together, they are working to continue and enrich WoCC’s mission of creating an intersectional space for women of color at NYU Law to find mentorship, organize educational events, and participate in activism on campus.

WoCC was founded during the 2008–2009 academic year by Dorothy Jones ’09 and Tulani Thaw ’09 as a support system for women of color at the Law School. Maria Romani ’12, a staff attorney at Brooklyn Defender Services, was a WoCC member and co-chair in the early years of the organization and says that the community was very important to her: “I was away from my entire family, and as a first-generation student… having WoCC, which encapsulated an intersectional group of people from different backgrounds, truly anchored me.”

The legal interests of WoCC members are as diverse as their backgrounds: Of the two co-chairs, McGona is interested in international women’s rights, while Thai hopes to pursue corporate mergers and acquisitions. “One of the best things about WoCC is that regardless of what path you hope to pursue after law school, you can find amazing conversations and perspectives,” says Devika Balaram ’19, one of WoCC’s 1L representatives. “We have so many different academic and career interests represented in our community, but we’re all united by our shared experiences, which often arise out of our lives as women of color in this country.”

The group’s flagship event is an annual alumnae reception, during which the Woman of Distinction Award is given to NYU Law alumnae who are leaders in their field. Professor Alina Das ’05 was honored with this year’s award, and previous recipients have included Judge Doris Ling-Cohan ’79, of the New York State Supreme Court, and Leslie Spencer ’98, litigation partner at Ropes & Gray.

WoCC also fosters communication between its members and administrators and faculty who are women of color through an informal luncheon hosted every fall semester. It was this event, says Thai, that originally drew her to the organization. “I was having difficulty during the first semester of 1L year trying to adjust to this environment and fit in, and hearing that these women of color at the top of their fields also went through the same things was very helpful to me, and very empowering.”

This year, McGona and Thai have developed additional initiatives to ensure that members feel able to express themselves freely and learn from one another’s perspectives, including formalizing a peer mentorship program that pairs 2Ls and 3Ls with 1L mentees. “It’s been a really rewarding experience—we talk about everything from politics to advice on their grades and summer internships,” says Thai. “It just helps for them to have someone to talk about their fears and what they’re going through during 1L year,” adds McGona.

The co-chairs have also revived “Sister Circle,” a WoCC tradition which Thai describes as “informal conversations between women of color at the Law School about race and gender and everything we care about.” On one occasion, the topic of conversation focused on the experience of being a woman of color and a law student. Another focused on the legacy that WoCC members hope to leave at the school.

“The day-to-day experience of becoming a lawyer for a lot of minority groups can sometimes feel very alienating—even as it’s empowering to be learning the language of the law,” says Balaram. “To experience that takes a lot of emotional work, and WoCC is a place that lets me feel that NYU supports all of me.”