Amelia Salzman '85 teaches her students inside strategy of environmental lawyering

“Environmental policy, from the perspective of a lawyer, is much more complicated than just the law,” says Adjunct Professor Amelia Salzman ’85, former associate director for policy outreach of the White House Council on Environmental Quality. “Environmental policy is so politically and economically charged these days that simply bringing lawsuits is not necessarily the best or only way to accomplish policy change—one really has to mount a much more strategic campaign to accomplish these changes.” That’s why, in her Public Interest Environmental Law Practice class, Salzman focuses on preparing students to practice in a world that requires a firm command of not just years-long litigation but also savvy public relations, constant networking, strategic engagement with decision-makers, and creative and sometimes counterintuitive coalition-building.

Salzman’s lectures cover three big case studies: the Environmental Protection Agency’s Mercury and Air Toxics Standard, the permit process for TransCanada’s Keystone XL Pipeline, and the EPA’s ozone emissions regulation under the Clean Air Act. She regularly brings in guest speakers directly involved in the campaign the class is studying, giving students a chance to interact with someone who was in the middle of the action. For example, John Walke, the director of the Natural Resources Defense Council’s Clean Air Program and a senior attorney, detailed his efforts to combat resistance to implementation of an EPA regulation curtailing toxic pollution from power plants, and particularly mercury. 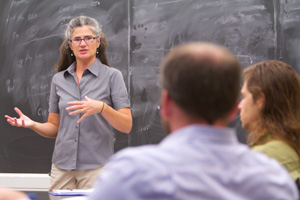 After eight years of effort during the Clinton administration, Walke said, the NRDC had made progress. But the new EPA regime installed during the George W. Bush administration proved to be a game-changer. When Walke received a major leak from an EPA employee in the form of a draft of a proposed cap-and-trade rule for mercury emissions that would drastically weaken the required standards, he went on the offensive. Contacting a reporter he knew, Walke ensured that a New York Times cover story threw a wrench in the works of the EPA’s plans. His point: it takes much more than environmental litigation to sway the public to your side and win the day. Maintaining reciprocal relationships is key. “Those relations are formed over time with expertise and credibility and professionalism that make you valuable to someone else.... In Washington, which is a town of relationships and connections and networking, having that level of trust ultimately helps.”

Walke’s visit to the class was valuable for Elizabeth Degori ’14, who interned this past summer for the NRDC in Beijing. “I found it interesting how much he interacted with other people beyond the NRDC—people at the EPA, people he’d worked with before, direct contact with the media. He had all of these relationships in place, and also had a great insider perspective on how things go wrong and how they go right. You don’t often get a sense of the process of how things get done just by reading articles. Sometimes there are questions that nobody asks because they’re just not written down, so actually having somebody who worked on them is better.”

Outside texts do, of course, play an important role in the class. “The readings are really varied, which is quite different from other law school classes,” says Benjamin Levitan ’13, executive editor of the Environmental Law Journal and former chair of the Environmental Law Society. Those readings include judicial opinions and amicus briefs, and less traditional sources such as blog posts and documents produced by advocacy organizations of different persuasions, giving students a comprehensive overview of the ideological battleground.

That multiplicity of viewpoints reflects Salzman’s own extensive professional experience in environmental advocacy, government, and philanthropy. “My job at the White House was to talk with everybody interested in the administration’s energy and environmental policies,” she says. “Sometimes I felt that if everyone was complaining because you’re not as extreme as some environmentalists would have you be and you’re not as reactionary as industry would want you to be, you’re probably in the right range if you’re in the government.”

Levitan put the idea of differing viewpoints into practice for an assignment in which he wrote persuasively about the downside of mercury regulation from the industry perspective. “I had thought a lot about what the cost might be to that side—costs and benefits and who’s winning and who’s losing,” he says. “But I’d never had to make a case that would appeal to a wider audience and figure out what language I would actually use, and how I would tug at people’s heartstrings in trying to convince them that my concerns are the ones that they should think about above and beyond what it would cost financially to comply with this rule.”

Now, Levitan says, he knows that if he is going to be an environmental lawyer practicing in the public interest, he’ll have to be prepared for a very long fight. “It seems like no environmental fight is ever really over, and partly it’s because there are so many different prongs. There’s the litigation prong, the lobbying prong, the public communications prong. A victory in court doesn’t mean the other side is going to stop fighting either in court or through these other channels. You just have to see it as more of a constant, steady career than as a series of milestones you’ll be trying to achieve.”