In May 2011, when Neal Katyal was acting U.S. solicitor general, he issued a confession of error for the two Supreme Court cases Hirabayashi v. United States and Korematsu v. United States nearly 70 years after they were decided. The two infamous opinions, which have never been explicitly overruled, upheld the constitutionality of a Japanese American internment policy that uprooted and detained more than 100,000 U.S. residents during World War II. The confession of error released by Katyal seven decades after the fact was an official admission that the government should not have won those cases. 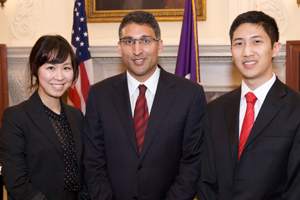 On March 9, Katyal, now the Paul and Patricia Saunders Professor of National Security Law at Georgetown University Law Center and a partner at Hogan Lovells, delivered the 13th annual Korematsu Lecture, “Gordon Hirabayashi and Fred Korematsu: The Solicitor General’s Error.” Katyal asserted that then-Solicitor General Charles Fahy “acted in a way that was not with full candor to the Court.... It’s a cautionary note for all of us as students and lawyers about what the bounds of respectable advocacy are. In saying this I don’t mean to judge Mr. Fahy. He’s obviously not here to defend himself, and we have limited historical materials. I do think those historical materials point to some very serious errors that he made, but I don’t mean to judge him as a man.”

In the course of writing an immigration brief to the Supreme Court, Katyal began to delve into the archived materials from Hirabayashi and Korematsu. Although a legal scholar had unearthed official documents in the 1980s that led to successful coram nobis petitions from both Hirabayashi and Korematsu, the Office of the Solicitor General had never admitted error in either case.

Franklin Roosevelt’s Executive Order 9066 in February 1942 allowed the secretary of war to declare certain parts of the country as military zones “from which any or all persons may be excluded.” A month later, General John DeWitt imposed a curfew for Japanese Americans on the Pacific coast, citing the possibility of enemy invasion aided by residents of Japanese ancestry. Shortly thereafter, mass relocation and internment commenced. Hirabayashi and Korematsu each defied what they felt to be unconstitutional restrictions on Japanese Americans, and their cases both went to the Supreme Court.

Katyal singled out two attorneys in the Office of the Solicitor General as worthy of praise for raising strong objections about the two cases. Edward Ennis, the director of the Alien Enemy Control Unit, told Fahy that DeWitt’s orders were potentially unconstitutional and that the Office of Naval Intelligence’s Ringle Report contradicted the Army’s assertions that Japanese Americans presented a real national security threat: “I think we should consider very carefully whether we do not have a duty to advise the Court of the existence of the Ringle memorandum and of the fact that his represents the view of the Office of Naval Intelligence. It occurs to me that any other course of conduct might approximate the suppression of evidence.” Fahy ignored the warning and used the Army’s reasoning in the brief to the Supreme Court, which unanimously upheld Hirabayashi’s conviction.

Ennis’s colleague John Burling joined with him in voicing dissent regarding Korematsu as well. The draft of the solicitor general’s brief in that case cited military claims that Japanese Americans were sending signals revealing sensitive intelligence to Japanese off the coast, but investigation by both the FBI and the FCC had failed to substantiate those allegations.

Burling wrote a footnote in the brief repudiating DeWitt’s report containing those claims, but the War Department asked Fahy to squelch that information because it would embolden the enemy in a time of war. Still determined, Burling and Ennis asked an assistant attorney general for help, arguing in a memo that “it is highly unfair to this racial minority that these lies, put out in an official publication, go uncorrected.... The Attorney General should not be deprived of the present, and perhaps only, chance to set the record straight.” A compromise footnote proved to be impenetrable, and when the justices questioned Fahy about it, he responded untruthfully that no one in the government had contradicted DeWitt’s report. Korematsu’s conviction, like Hirabayashi’s, was subsequently upheld.

“The Court rightly should get some of the blame, but I don’t think all the blame rests with the Court,” said Katyal. “The Court is a generalist institution, and the place where it has the least competence is in matters of national security, intelligence, foreign affairs, and the like. That’s the place in which they have to rely on what the government says, and the government has to be absolutely straight and have absolute candor because it’s very hard to question it and peer behind what the government is doing.”

While Katyal did not deny that this part of U.S. history was a dark one, he pointed to one silver lining—and a lesson. “The arguments were of course products of their time, but I think the most notable aspect of the story is that even at the time... there were still these brave individuals in the Justice Department, Ennis and Burling, who said, ‘You can’t do this. This isn’t right. We have to be straight with the Court.’ I think we should remember their voices, because their voices of dissent ultimately proved right, and the government ultimately, I think, was proven very wrong.”

The Korematsu Lecture was sponsored by the Asian Pacific American Law Students Association.